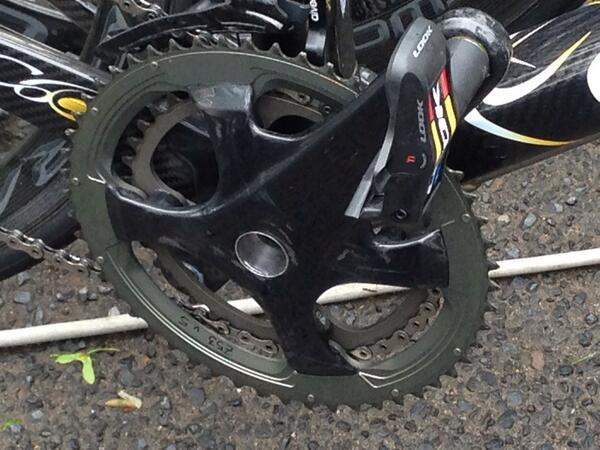 Is this Campagnolo's new chainset?

Is this photo sent to us by an eagle-eyed road.cc reader Campagnolo’s latest chainset? That it was spotted on a Europcar Colnago C60, a team sponsored by the Italian component manufacturer, suggests to us that it is, despite the lack of any branding.

Campagnolo only recently released their new Over-Torque chainset, their first with a 30mm axle so it’s no longer necessary to use adapters in the large majority of carbon fibre frames, utilising the press-fit 30 standard. It was readily recognisable as Campagnolo, with the same four arm/five bolt spider design.

This new chainset appears to use a similar four arm/five bolt spider design, but the critical difference is the much larger spider design. The arms of the spider now extend almost to the edge of the big ring, and it looks like both chainrings bolt into the back of the spider, rather than the spider being sandwiched between the chainrings as with the previous chainset design.

They’ve also repositioned the layout of the spider arms, and it’s clear they’ve taken a leaf out of Shimano’s book, as the spaces between the arms are uneven. Shimano say they adopted this design to retain the efficiency of power transfer while reducing weight, taking into account the positions in the pedalling stroke where most power is applied. It would seem likely Campagnolo are using similar reasons with their design.

We asked Campagnolo about this chainset, here's what Press Manager Joshua Riddle had to say.

"At this point in time I cannot say anything more than to simply state that Campagnolo depends on high level feedback from professional riders before releasing new product. In addition to our extensive in house testing facilities we feel that testing in the most extreme testing ground in the real world is an absolute necessity and the products you have seen are developments in the process of being tested by our top athletes in top races. Their feedback will help us further improve existing product in addition to developing new product."

Thanks to @smythy75 for sending us the photo.