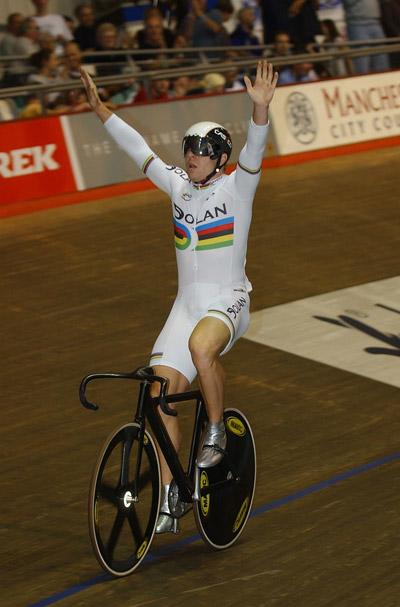 Hoy back in Manchester for Revolution 22

UK racing debut is a sell-out
by Tony Farrelly

Chris Hoy will make his UK season debut at Revolution 22 on the 6th of December and it will be the first time he has raced in the new Sky + HD kit, but unless you have a ticket you won't be able to witness it, because the event is sold out.

After starting the season off with a sprint victory at the Milan 6 at the beginning of November, Chris is on good form for the upcoming Revolution. He said: “Really looking forward to getting back racing. Revolution is one of the highlights of the season for all the riders so I’m pleased that it will be my first race back.”

The Revolution series is now in its sixth year, and Hoy has been a star attraction in every one. Like most of the world's top track riders, and quite a few roadies too, Chris clearly enjoys racing at the Revolution. Manchester is his home track of course these days but that only explains part of the attraction.

“The combination of entertainment with high quality racing is what has made the Revolution so successful. The racing is really hard and fast and the event brings some of the best riders in the world to compete – this quality and the entertainment element creates an amazing atmosphere that is unique in track racing.

“The riders all really enjoy racing the event and many riders have used the Revolution as their swansong with Fiedler and now McGee choosing it as their last race. This goes to show the popularity of Revolution with the riders as well as the spectators.” With a busy season planned for this winter / spring, Chris is looking ahead, saying: “[my] focus will be the World Championships and hopefully I’ll be contending all three sprint disciplines.”

Although tickets for Revolution 22 are sold out tickets for the remaining Revolution events on 10th January and 21st February are available to purchase at www.cyclingrevolution.com