Long-serving bicycle journalist Richard Hallett, formerly of Cycling Weekly and RCUK, has swapped his keyboard for a welding torch and started his own custom framebuilding business, Hallett Handbuilt Cycles. On his way back from riding the 300km Dragon Ride sportive at the weekend, Richard dropped into the road.cc office to show us his latest build, a 650b steel-framed road bike. 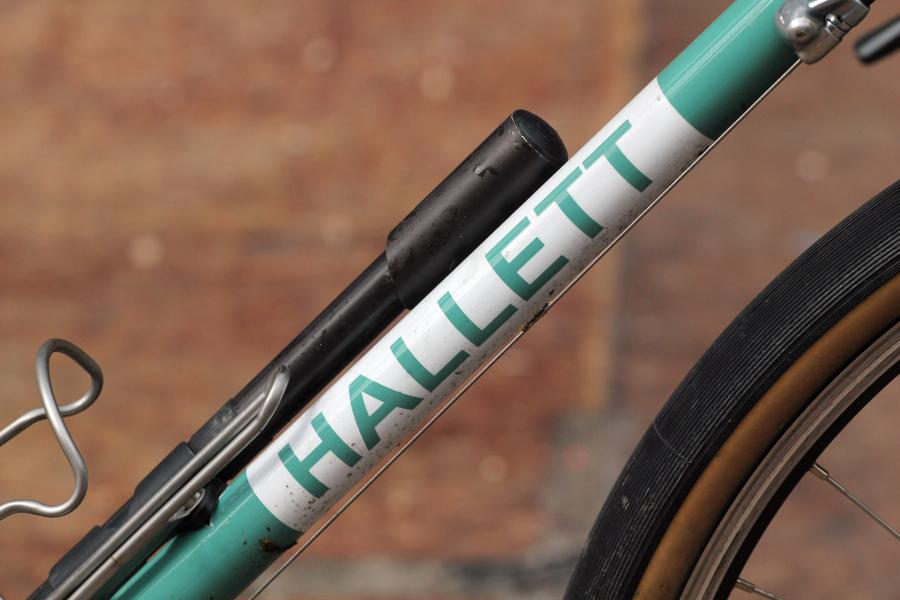 If you're wondering what 650 is, well put simply it's a French wheel sizing system, with a letter designation indicating the tyre width. 650b, with a 584mm outside rim diameter paired with a 38mm tyre, has the same outside diameter as a 700c wheel with a 19mm tyre. 650b was extremely popula rin France half a century ago with traditional touring and utility bikes. Though it never gained wider adoption and was largely been forgotten for a long time, it still has many fans and with the general popularity of wider tyres, it has a growing fanbase. It's fair to say we're starting to see a renewed interest in 650b. 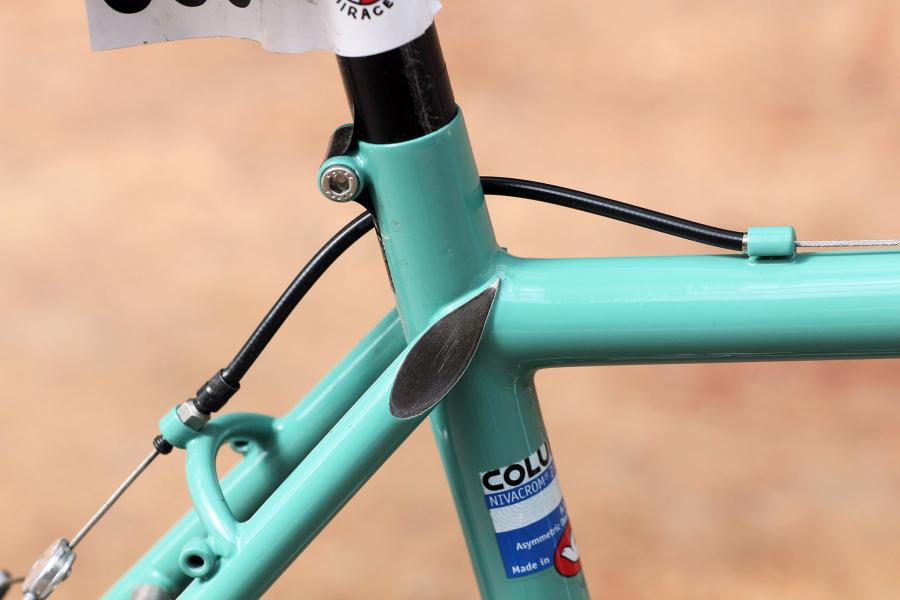 We sat down with Richard over a coffee and asked a few questions of his new venture and just why his latest project uses an uncommon wheelsize.

With some 20 years of experience reviewing and testing bikes and the latest cycling products, what prompted you to get into framebuilding?

A whole bundle of things. For one, I formed a few ideas over the years on how I would like a bike to ride and handle and never found one that quite met my brief. I have been building wheels and making stuff for years using machine tools and so on, and constructed a solar-powered car back in 1993 with Ken Bird, so it didn’t seem too much of a leap to build a bike frame. I asked my friend, the late, great Cliff Shrubb, to teach me the old-school way to do it and incorporated some of my ideas on geometry in my ‘tutorial’ frame, which turned out well. Plus, I really enjoyed the process, so I have decided to begin custom building. Apart from anything else, it’s a great way to explore alternatives to the mainstream.

It's a good time for custom bikes, isn't it?

The success of the Bespoked show for custom builders shows just how much interest there is in the craft, which looked in danger of dwindling to a tiny rump a few years ago. I guess the growing interest in cycling as a whole means that there are more people looking around for something a little more individual than the offerings of the larger manufacturers. I have been building wheels for about 20 years and can put together anything from a simple frame to a complete machine. There’s something particularly satisfying about building the bike from the ground up.

How would you characterise a typical Hallett custom frame?

My aim is to build fast, comfortable, fine-handling cycles with a distinctive style and finish. I have come up with a way to make the bottom bracket area using bi-laminate construction and hand-cut tube sleeves that really stiffens the bracket against pedalling forces without much added weight. I think it looks good but it has to be ridden to be appreciated. 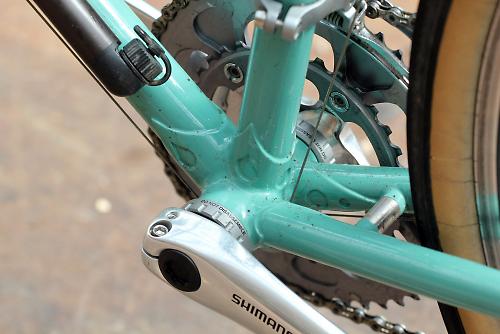 Your latest build revolves around 650b wheels, an uncommon sight in the UK. What was the reasoning behind the wheelsize?

High-performance 650b tyres were first made in the 1920s, so they aren’t new. You’re right about their rarity in the UK as the size was associated with French randonneur bikes. It is increasingly popular in the US where they have an extensive network of gravel back roads. The fat tyres (42mm on my build) soak up bumpy surfaces and roll fast on smooth tarmac. The only significant drawback is tyre weight, which is about 400g even for a light tyre. 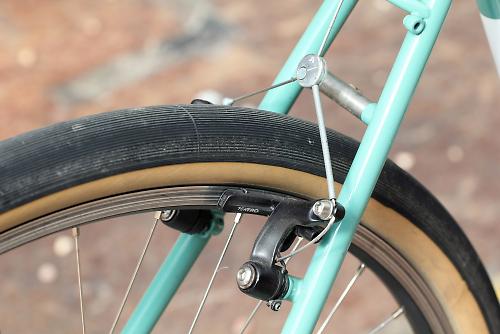 Was it a challenge building a frame around the 650b wheels?

It was a bit. I wanted to achieve two things: steering and handling comparable to my 700c bikes and regular straight chainstays, not ‘cranked’ as on a mountain bike, to allow me to use a road-style compact chainset. In the end, I simply indented the chainstays to clear the tyre and can fit a 42mm tyre with plenty of room. 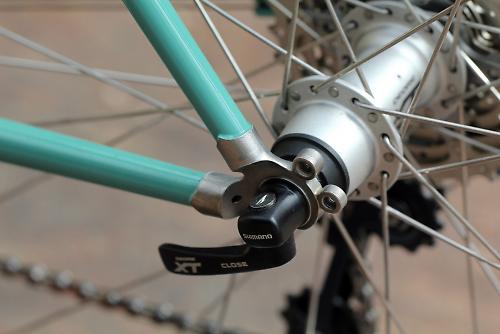 Compared to a regular 700c road bike, did you have to make any specific modifications or changes to the geometry?

Apart from the chainstay indents, the build was much the same as for any frame with cantilever brake bosses. I worked out a steering geometry that would work with fat tyres to get around issues with pneumatic trail [an effect caused by compliant tyres rolling on a hard surface and subject to loads from the side, as they are in a turn] and lengthened the wheelbase to improve off-road handling in case I ever decide to use it properly. 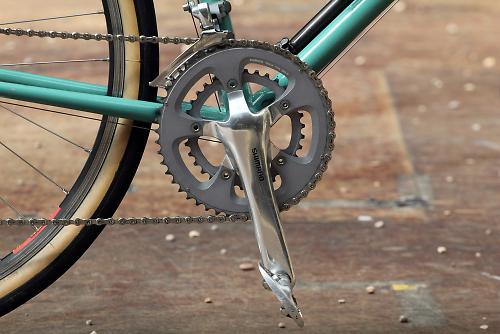 You've just ridden this bike in the 300km Dragon Ride. How did it fare?

Better than me. Seriously, it was a blast on the descents and great over some of the rough roads out in the Cambrian mountains but probably a bit heavy for a sportive where the temptation is to try to stay with other riders on the climbs. It’s more of a touring bike, which is what I’m going to use it for. 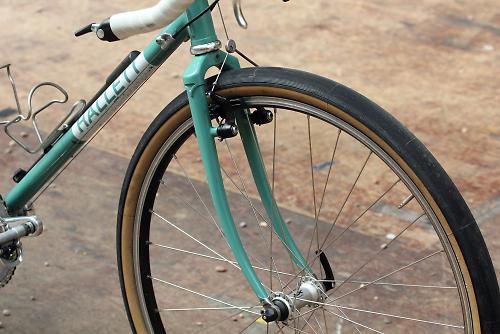 The fitting of wider tyres is getting more popular with pro racers and everyday cyclists. Do you envisage 650b being the natural evolution of this progression?

The issue is tyre weight and inertia. A 700c x 23c tyre is about half the weight of a 650b x 42. Besides being faster uphill because it is lighter, 700c is much quicker to accelerate so it is a better size for fast, vaguely competitive general road riding. On the other hand, 650b makes sense on poor or unmade road surfaces and for touring with a load because the rolling resistance is good. It’s a bit of a specialist size but makes a lot of sense in the right application. 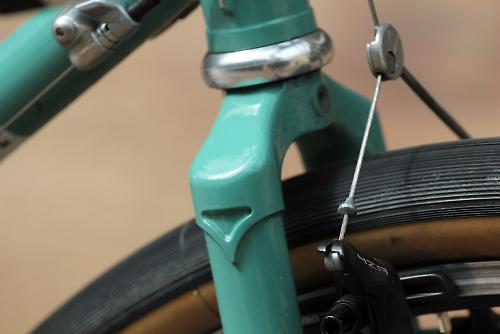 Is there good availability of 650b wheels and tyres?

Yes, and getting better. Continental does a tyre called the Tour Ride in 650b (actually 584-37) which has a heavy tread suitable for mixed riding such as canal towpaths. I’m riding 42mm wide Grand Bois Hetres at the moment. They are very light for the size at 400g, super-comfortable, fast and grippy on descents and there are rumours of a fast 650b tyre from one of the big manufacturers. Velocity USA does a 650b rim brake version of the Synergy rim and Velo Orange offer the Diagonale. There’s also a 650b rim by Pacenti, so the situation is good but could be better. 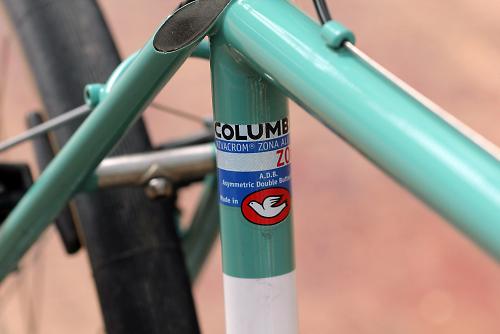 Finally, what else can we expect to see from you in the future?

My latest build is retro-style with lugs and a one-inch threaded steerer, which I plan to use for L'Eroica Britannia. Stainless steel offers plenty of opportunity for decorative effect and the new Reynolds 921 stainless tubeset can be cold-worked, so I may well find myself riding a polished stainless 650b tourer – with matching custom front and rear racks.

Thanks to Richard for taking the time to chat to us. We're planning to swing a leg over this bike to see how it rides in the next couple of weeks, so we can let you know what it's like. With wider tyres growing in popularity in recent years, and many of the road.cc team experimenting with tyres between 28mm and 32mm on regular road bikes, it'll be interesting to see how this bike, the next logical step in the pursuit of fat-tyred comfort, compares.

You can find out more about Richard's frames and some of his other projects over at www.halletthandbuiltcycles.com.