Today's stage 3 of the Tour de France is a flat one from Cambridge to London favouring the sprinters, and one such sprinter hoping to have the speed to cross the line first is Cannondale Factory Racing’s Elia Viviani. He'll be riding this Cannondale SuperSix Evo decked out with a SRAM Red groupset and Vision Metron wheels, the same bike he has been riding all season. Cannondale first introduced the SuperSix Evo in 2011, and apart from a lighter version using a nano carbon layup a couple of years later, has gone unchanged in that time. It’s not showing its age compared to newer bikes though, with a competitive 695g frame weight that compares favourably to more modern race bikes like the newly launched Trek Emonda. 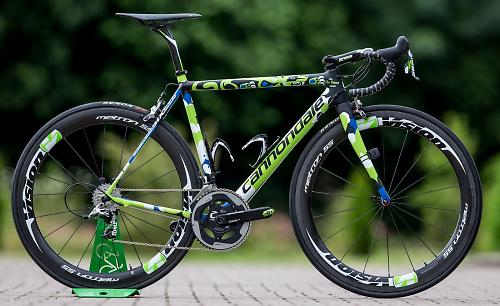 There’s no sign of a new Evo as far as we can tell,  there was certainly no indication of anything new being raced in the Tour. No new bike, but lots of new paint jobs however: after we visited the team hotel to photograph the team bikes, the US company rolled out custom painted bikes for the entire team. Underneath the paint finish the frame, and the entire bike, is the same however.

Here he is showing of his new bike on Twitter the other day:

Wow @RideCannondale this is my fantastic Bike for @letour ! Thanks @cannondalePro #evo like it? pic.twitter.com/wL8jcwQ0Gn This is one of the Italians reserve bikes then. Each of the team have spare bikes and they’re all set up identically with the same kit so they can easily switch between them in case they have a mechanical. Elia Viviani stands 1.77m (5’ 9”) tall and rides a 52cm frame. That does seem quite small for his height, we’d probably expect a rider of that height to at least be on a 54cm, but then he might have short legs for his height. There has long been a trend in the professional peloton for riders to race a frame size one smaller. Why? Usually it’s so they can get the handlebars very low for an aerodynamic position, they solve the reach issue with a very long stem. It’s not unusual to see 140 and 150mm length stems on some bikes. Viviani however has quite a normal looking setup, with what appears to be a 130mm stem. He also has the hoods rotated up the bar bend quite a bit too, they’re far from horizontal with the ground. His bar preference is an FSA Plasma carbon fibre integrated bar - we’ve spotted a fair few such bars in the peloton, such as the new Canyon Aeroad integrated bar and the Deda integrated bar on the Europcar bikes. And unlike the pro fashion for ‘slammed’ stems, the Italian sprinter has a positive rise stem. There are no spacers between the stem and headset top cap though, keeping it low,, and just a 5mm spacer underneath the stem cap. His bike is decked out with a full SRAM Red 22 groupset (no sight of the company’s yet-to-released wireless electronic grouppo) with a 53/39 chainset with 172.5mm arms and a 11-28 cassette. Most of the bikes we looked at were running 11-28 cassettes, with SRAM’s long cage WiFli rear derailleur option. We reckon, apart from the cobbles of stage 5 (where they’ll be running different bikes anyway) that they’ll not change the cassettes to something like an 11-25 for the flatter stages. That’s one of the advantages of 11-speed drivetrains, an extra sprocket that gives a more useful spread of gears. Like the Specialized-equipped bikes with their S-Works chainsets, the Cannondale team use Cannondale’s own SiSL2 Hollowgram chainset instead of the SRAM Red chainset. The company claims, as it would, that it is one of the lightest and stiffest cranksets available. Bolted to it are SRAM Red chainrings with a 53/39 setup. He’ll have an SRM Powermeter fitted to his race bike, this being his spare bike didn’t have one fitted. His saddle preference is for a Fizik Arione 00, a svelte minimalist design and light at a claimed 135g. Pedals are Speedplay, much like the rest of the Cannondale team in fact. 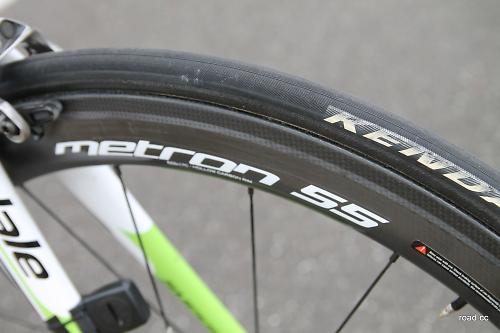 Wheels are Vision Metron 55, a 55mm deep carbon fibre tubular with the on-trend wide profile. Interestingly quite a few of the Cannondale racers, admittedly the less well known guys, are riding the older Vision TC50 wheelset, which has the traditional V-shape rim profile. They look dated alongside the newer Metron 55 with its rounded bulbous profile. Tyres are Kenda SC badged tubes with no other markings. Our guess is they’re 25mm width, they certainly look too wide to be 22 or 23mm tyres.

Here's Viviani in discussion with the team this morning before the start of stage 3 finishing in London:

We have a plan for today @cannondalePro , ready for a sprint stage! #greenmachine #tdf #stage3 pic.twitter.com/cbUM5SH1S4