Italian company reveals new Idol with or without disc brakes, and a King XS with direct mount brakes
by David Arthur @davearthur

Legendary Italian bicycle manufacturer De Rosa have been busy for 2015 with the launch of a new Idol available with or without disc brakes, and a new King XS. We've also picked out few other highlights from their latest range from their recent UK trade show.

The new King XS is a beautiful bike. It’s elegantly proportioned with a slender fork and that red stripe drawing the eye along round top tube into the skinny seatstays. The most noticeable thing about it is the adoption of direct mount brakes. Developed by Shimano, direct mount brakes, as their name suggests, use pair of bolts that thread directly into the frame or fork, instead of a conventional caliper that uses a single mounting hole with the bolt passing right through the frame or fork. Claimed benefits include improved aerodynamics and increased rigidity resulting in better braking. Loads of manufacturers are using them in 2015, such as Koga, Trek, Fuji, Canyon, Colnago, Orbea Avant to name a few. 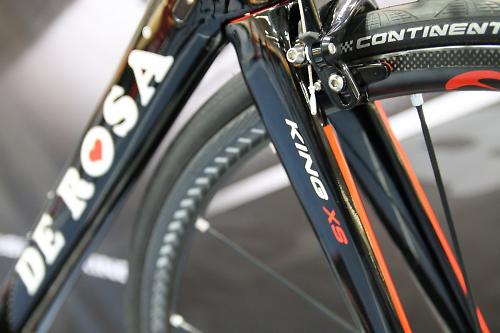 The frame, constructed from T1000, T800 and XN10 carbon fibre, uses a BB386 press-fit bottom bracket and  1-1/4" to 1-1/8 tapered head tube. Seatpost size is 31.6mm. De Rosa claim a frame weight of around 950g which is certainly pretty light, and the full bike here with a Campagnolo Chorus EPS groupset and Fulcrum’s new Racing Zero wheels, certainly won’t trouble the scales much at all. 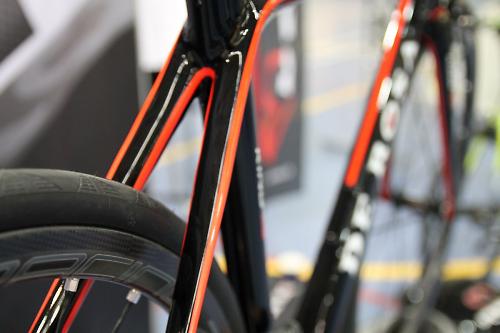 The only downside to De Rosa using direct mount brakes is that Campagnolo don’t (yet) produce their own version. Instead, this bike was fitted with Tektro direct mount brakes. While there’s nothing wrong with the Tektro brakes, they’re perhaps not the sort of brakes you’d expect to find on a bike costing close to £10,000. 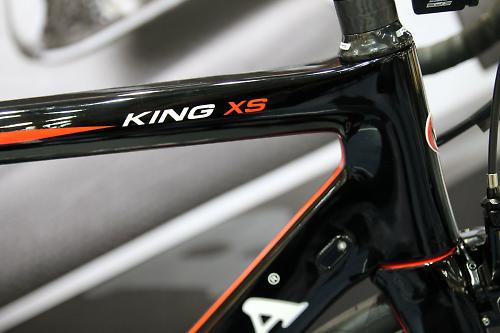 The rear brake is positioned behind the bottom bracket underneath the chainstays and does provide a pair of clean uncluttered seatstays. The front is fitted to the front of the fork. The Idol frame has been updated for 2015 and replaces the Merak in the range, and it’s available with regular rim brakes or a disc-equipped model. We first saw the disc version at the Cycle Show last year, but this here is an actual production bike and it’s set to be in the shops soon. 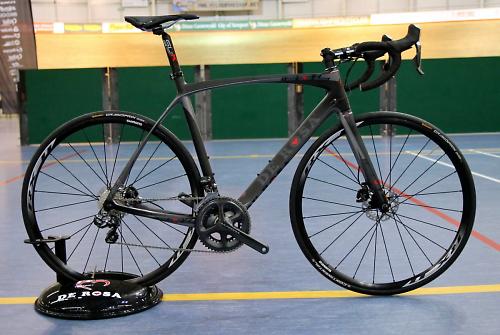 The disc version was grabbing all the attention at the show. Shimano’s Ultegra Di2 groupset with hydraulic disc brakes and Shimano’s RX31 wheels are used to build this model bike, with a price of £3,699. There will also be a bike with mechanical Ultegra costing £2,999. 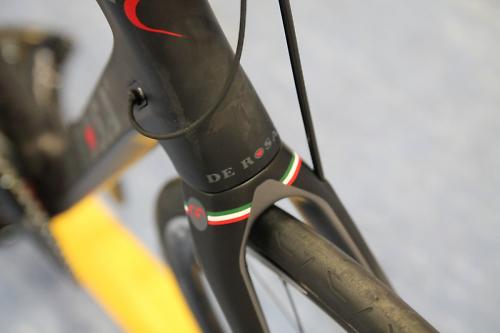 While the frame is very much the same as the regular Idol, the rear stays and fork have been redesigned and uses post mounts for the brake calipers. All brake hoses and Di2 wiring are neatly routed inside the frame, even the front hose passes inside the fork. 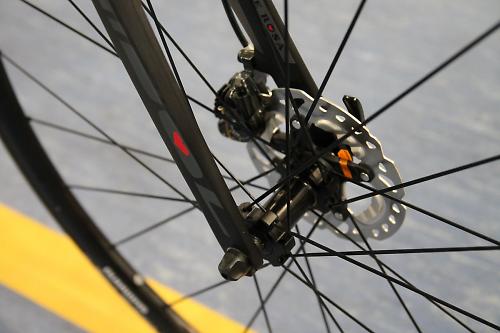 On the whole quick release vs bolt-thru axle debate, De Rosa have swung towards convention and specced traditional quick release axles at both ends. To ensure the frame can cope with the forces generated by the disc brakes, they've used a blend of super high modulus, T1000 and T800 carbon fibre in key areas, especially the chainstays, to keep everything tracking in the same direction. There are seven models with regular rim brakes, starting with a Campagnolo Athena build at £2,999 and rising to Chorus EPS costing £4,299. An Ultegra Di2 model costs £3,999. They've got a nice range of colours, frame conservative grey and black to this tasty white and blue model below.

Those are the key changes to the De Rosa 2015 range, but there are a few other bikes in the range that while not exactly new, are still worth a look at. 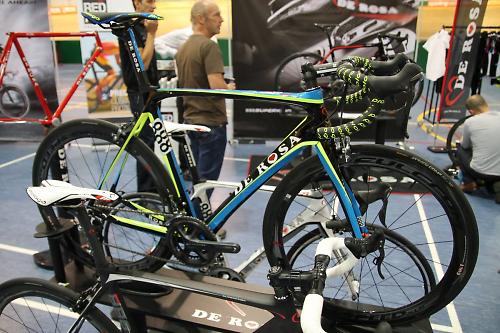 This is the Super King SR with a Vini Fantini-Nippo inspired paint finish. De Rosa of course sponsor the Italian team. 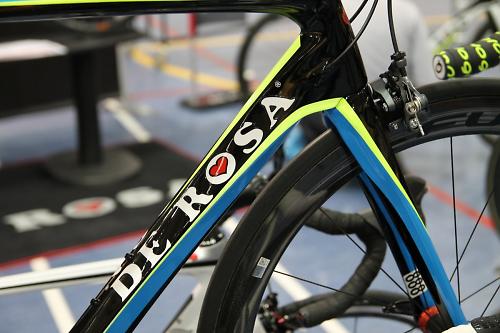 We don’t think the bar tape really matches the frame that well though, it's just the wrong shade of yellow in the Prologo logo. We’d swap it either for black or yellow if it was our bike. 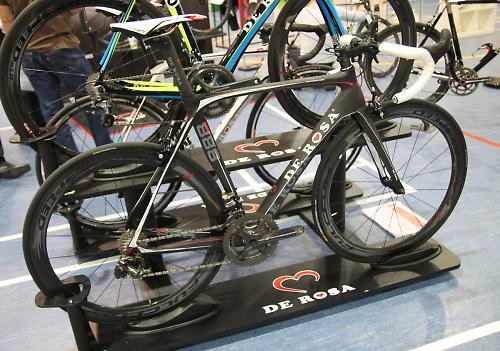 And here's a more muted paint job for those with more conservative tastes.

Award for the Biggest Down Tube of Any Road Bike goes to… the Protos. We didn’t have our tape measure to hand, but this is without doubt the biggest down tube we can recall ever seeing on a road bike. If you know of a bigger down tube, please let us know in the comments section. 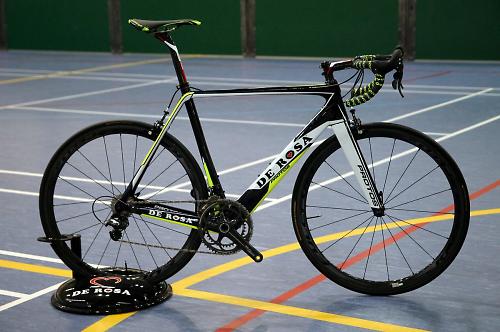 Despite its considerable girth, it’s still a light frame with a sub-kilo weight (De Rosa claim 800g). It’s built for stiffness, clearly, and that means racing is its intended stomping ground. The massive proportions of the down tube are echoed in the rest of the frame, with a large and very angular fork and gargantuan chainstays. You’d need thighs the size of Sir Chris Hoy to flex those girders. 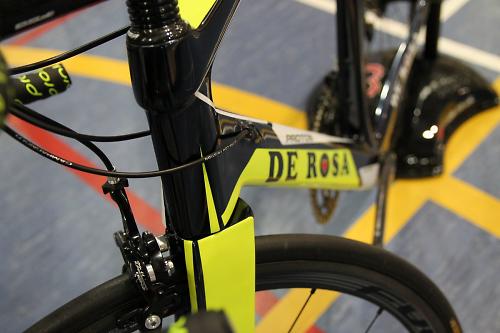 It’s not only the tube profiles that are massive, the price is pretty massive too… £6,499 for the frameset.

That’s a bit rich for most budgets, so here's the much more affordable R838. It's available with a Shimano 105 groupset costing £1,799. It’s a really nice looking bike too with a smart carbon fibre frame and fork and keeps with a racing geometry. 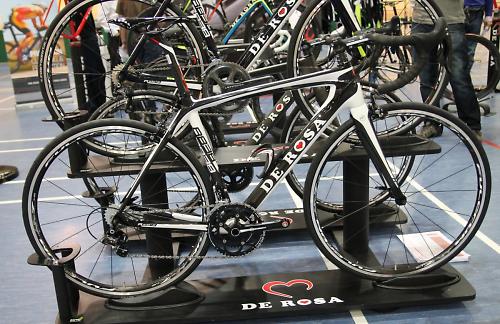 There are four R838 models to choose from in 2015, including the two we’ve already mentioned, and, at the very top, an Athena specced bike for £2,799. 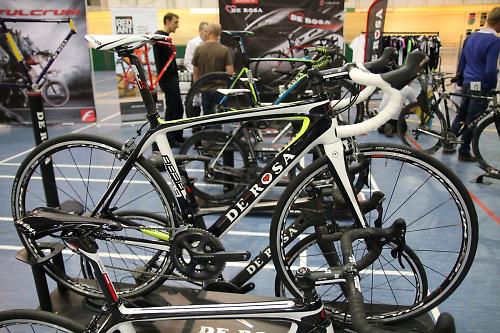 They offer a choice of colours for each model, a conservative Stealth Grey or Black White or, if you’re feeling flashy, a Vini Fantini colourway. Don’t forget your fluoro socks.