The Newport Nocturne bills itself as being the UK’s original floodlit cycle race. Always popular, this year’s race is expected to draw bigger crowds than ever before when it takes place on August 30, says Alex Bowden.

Speaking to The Shropshire Star, organiser Nick Jeggo said: “Following the Tour de France wins in recent years of Bradley Wiggins and Chris Froome, and with the Tour having started in Yorkshire this year, there has been an upsurge in the popularity of cycling. Past Nocturnes have attracted up to 15,000 spectators and we are expecting a bumper turnout.”

Jeggo believes that interest tends to be greater for the fact that the race only takes place every other year, but he can also point to a number of world famous riders having taken part in the past. Mark Cavendish, Sean Kelly, David Millar, Geraint Thomas and Ed Clancy have all featured in previous years and speaking earlier in the year, he was hopeful that Clancy would again be involved.

The Newport Nocturne is also notable for the unusual prize on offer for the winner of the men’s race. 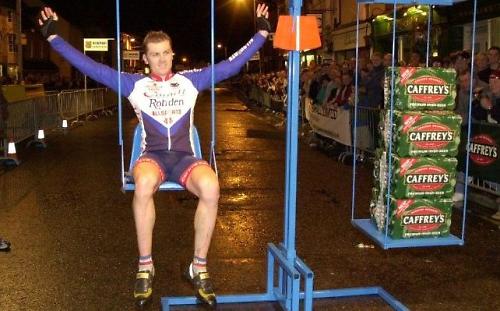 “One thing is for sure, the men’s winner will be getting his weight in beer. The giant scales for this quirky prize were first used in 2001 and since then the award has been a crowd favourite. Local publican Paul Quinn supplies the beer, but he doesn’t get off lightly as other prize winners and even podium girls have been known to climb aboard with the winning rider.”

The race makes use of a 1.2-mile circuit which Jeggo describes as being "fast and technical". It travels both ways along Newport’s High Street and also includes a stretch of cobbles on St Mary Street.

With so many spectators in attendance, the course is lined with barriers, but marshals are still needed for crossing points. Those who would like to volunteer can get in touch on 07712 806928 or by emailing seandlacey [at] gmail.com (subject: Newport%20Nocturne) .

Further information about the race can be found on the Newport Nocturne website.