At Eurobike last week Colnago revealed a disc brake version of their new V1-r aero road bike, and one of the most interesting aspects of it was the 15mm thru-axle on the fork. We cornered Colnago engineer Davide Fumagalli, to get him to talk us through the new axle, which is a collaboration with suspension manufacturer Manitou.

Manitou have offered the innovative Hex Lock 15 thru-axle on their mountain bike forks for some time now, but this is the first time a road cycling manufacturer have attempted to adapt tech technology.

In essence the Hex Lock 15 looks startlingly similar to the Focus Rapid Axle Technology (RAT) design we took a look at recently. You simply slide the axle through the dropout, turn it 90 degrees, then close the lever. A small T-bar shaped end locks into the opposite dropout. It’s really easy to use, as simple as the Focus RAT axle, and is even quicker than a conventional thru-axle that has to be threaded into the dropout. Both of these thru-axle designs solve the issue of speedy wheel removal concerns, and if anything make changes even quicker, simply because you don’t have to carefully tighten up the quick release to get the right amount of preload when you close the lever. 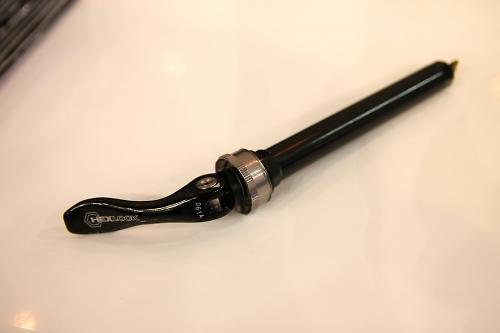 The new fork has metal inserts to prevent the carbon wearing out, and there’s a removable engagement plate in the opposite dropout, which is covered with a plastic dust cap in use. Colnago claim the fork weighs 420g and the brake hose is internally routed. We should expect to see the V1-r disc with this new fork available later this year hopefully, and we’ll be keen to get a closer look at the production axle. While Focus are using thru-axles front and rear, Colnago are only using it on the front as they feel there is no real need to a thru-axle at the the rear dropouts, but there is a very real need for it in the fork, to resist the twisting forces generated by the disc brake. So, Colnago may be a company steeped in history and one that trades off that sometimes, but with their interest in disc brakes and thru-axles, it shows they’re very much looking to the future.