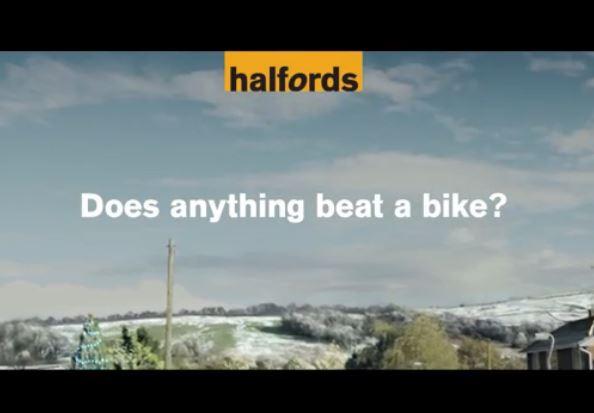 Video: Halfords' Christmas ad asks, "Does anything beat a bike?"

It’s not Halloween till Friday, but here’s a scary thought – the Christmas advert from Britain’s biggest bike retailer, Halfords, makes its debut on ITV this evening.

The 30-second TV version of the ad will also run during Saturday’s edition of the hugely popular show, The X Factor, and carries the strapline, “Does anything beat a bike?”

Trade website BikeBiz says that the full 60-second version of the ad, which you can watch below, will be used online and on social media.

The ad has a timeless feel, and could be placed pretty much in any decade from the 1970s on, apart from a couple of visual clues – the wheelie bins outside the houses, and the helmet briefly seen on the main character’s head before he covers it with his hoodie.

There’s not a car in sight, and inside a house we see books and board games rather than tablets and consoles.

Written and created by advertising agency Mother, the spot is directed by Aoife McArdle of Somesuch & Co, and is said to be “encapsulating the freedom of cycling for children while inspiring memories of the cherished Christmas present for adults from childhood."

In other words, it is partly aimed at prompting nostalgia among parents of when they received their own bike as a Christmas present back in their younger days, in the hope it will inspire them to do likewise for their own kids.

Karen Bellairs, marketing director at Halfords, said: “We wanted our Christmas ad to capture the magic and nostalgia of Christmas and evoke the feelings of being a child surrounded by that magic on Christmas Day, along with all the expectation and excitement that brings.

She added: “We’re also showing the confidence we have in our offer – we all remember the universal experience of receiving a new bike and wanting to get out and ride it straightaway on Christmas Day – after all, you can’t do wheelies on a tablet!”