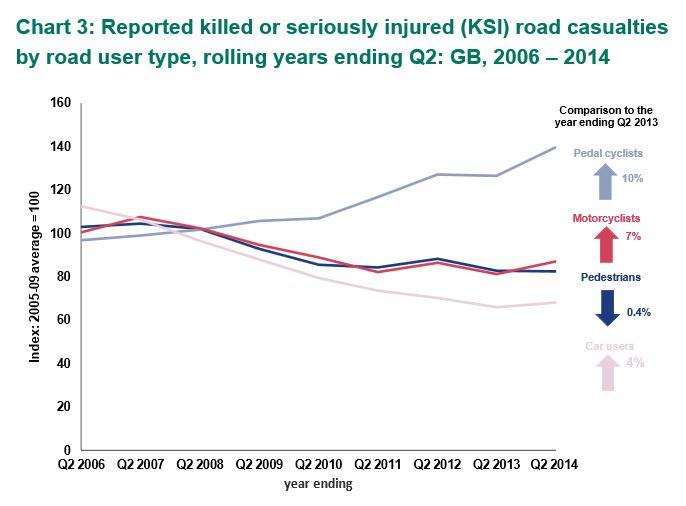 Sustrans says that Britain’s roads “aren’t safe enough” following the release of government figures showing a 10 per cent rise in the number of cyclists killed or seriously injured (KSI) in the year to June 2014.

During the period, 3,530 people on bikes lost their lives or sustained serious injury, according to the latest quarterly estimates of reported road casualties from the Department for Transport (DfT).

Claire Francis, head of policy at Sustrans, said: “Safety concerns are the biggest barrier to walking and cycling and these figures showing a 10% increase in cycling casualties only support that our roads aren’t safe enough.

“With 3,380 child pedestrian causalities already this year, we are failing to enable our children to get to school safely. It’s no wonder that more and more children are being ferried to school by car.

“It’s a scandal that this is allowed to continue when we have simple solutions at our finger tips,” she continued.

“Dedicated, long term funding for safe routes and slowing traffic speeds with 20mph limits would transform our communities, make cycling and walking safer, and allow children to journey to school safely by foot and by bike.

“The Government is investing £24bn in our road network with the understanding that funding certainty is essential in planning for the future, but aren’t committing resources to cycling and walking in the same way.

“We are calling for an investment strategy specifically for cycling and walking to be adopted into the Infrastructure Bill to take that vital step forward in making our roads safer.“

Among all road users, KSIs rose 4 per cent to 24,580, including 1,760 fatalities, in the 12 months to June. During the same period, the DfT says there was a 1.7 per cent increase in motor traffic, excluding pedal cycles.

Longer-term trends reveal that cyclists are the only class of road users among whom there has been a rise in serious injuries and fatalities when comparing data for the year to June 2014 against the 2005-09 average, up by 40 per cent.

However, in the absence of accurate figures recording levels of cycling at national level it is impossible to determine how much of that may be due to more people riding bikes, or whether the roads are getting more dangerous for those on two wheels.

However, the DfT did note that the weather in the second quarter of 2014 was warmer than it had been 12 months previously, likely to have encouraged more cyclists onto the roads and thus increasing their exposure to the risk of being involved in an incident.

For the same period, car occupants saw a reduction of 32 per cent in KSI numbers against the 2005-09 average, while falls of 18 per cent and 13 per cent were recorded for pedestrians and motorcyclists, respectively.