We’ve just been along to Specialized UK to check out their latest bikes for 2015 and here are the highlights of the Tarmac, Roubaix and Venge ranges. We’ve already had a look at the Allez aluminium models in a separate article.

The main changes have centred on the Tarmac for this year, with a new model unveiled at the Tour de France, though it was spotted earlier than that. The Roubaix and Venge models, endurance and aero bikes respectively, carry over unchanged. The Roubaix, if you didn’t know, has been with us for 10 years now, and pretty much started the entire sportive category of road bikes aimed at cyclists craving more comfort than traditional road bikes could offer them.

And there are more disc brakes as well, though it has to be said Specialized have been offering discs on the Roubaix for a number of years, but there are a few more pricepoints to choose from now. But the really big news is the Tarmac Disc, one of the few proper race bikes with disc brakes. Let’s take a closer look...

The Tarmac has been completely redesigned for 2015, and one change to get out of the way first is Specialized have dispensed with the numbering system (they’d got up to SL4) saying it’s too restrictive and want the model to be simply known as the Tarmac. So this is the new Tarmac, not the SL5. Got it? 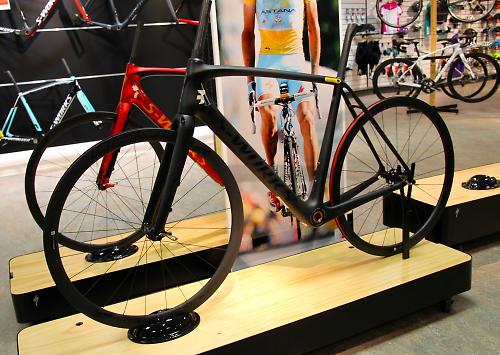 Right, so the big change is what Specialized have dubbed the Rider-First Engineered approach. Specialized were already doing size-specific carbon fibre layup on the old Tarmac, but they’ve taken it a step further on the new Tarmac, with optimised tube profiles and sizes for each model.

"Each of the six frame sizes were developed independently, based exclusively on the real world stresses introduced by the corresponding rider," says Specialized. Previous Tarmac frames were designed around a 56cm, and scaled up and down to get the full size range. The development was also fuelled by feedback from Alberto Contador, who felt the rear-end of the 52cm Tarmac he races was too stiff and hampered performance through the corners. 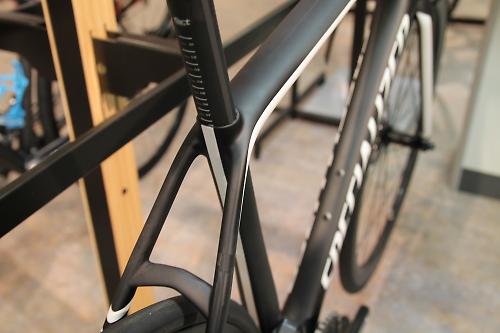 Another small but visible change is the move from an external seat clamp to an integrated design. This frees up about 35mm more seatpost to be extended out of the frame, and so provides a bit more deflection, helping to provide a bit more damping when riding over bumpy roads. Meanwhile the bottom bracket shell now has an aluminium insert to avoid any creaking. 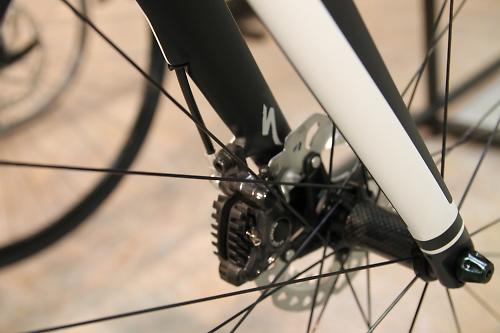 Aside from those changes, the other big news is of course the fact that you can choose the Tarmac with regular rim brakes, or disc brakes. Specialized developed the two versions of the new Tarmac alongside each other, which has meant they’ve been able to control the weight of the disc version much more tightly than if they were simply modifying an existing frame. As such, they claim the disc version is only up to 50g heavier. The main changes on the disc brake are in the fork, that’s different, and a slightly different carbon layup in the rear stays. 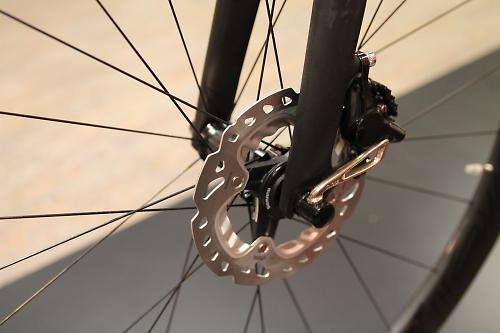 This makes the Tarmac one of the few proper race bikes with disc brakes, as most disc-equipped road bikes so far have been of the endurance flavour. Specialized have also gone with regular quick releases, as most other manufacturers are doing, with a few exceptions such as Trek and Focus, who are using thru-axles.

The geometry is identical to the regular non-disc Tarmac. That means the same short 405mm chainstays. Shimano actually recommends a minimum 415mm chainstay length for road frames with disc brakes, because the wider rear axle can cause chainline issues. So most disc bikes so far have been on the longer wheelbased endurance models, where the longer chainstays skirt around the issue.

Specialized have come up with a clever solution that allows them to keep the short chainstays on the Tarmac without incurring any chainline problems. They've simply designed a hub that places the cassette 5mm inboard, so it's where it would be if it were a 130mm rear axle. This does require a different dropout and mech hanger, and while other wheels can be used, you won't get the perfect chainline. 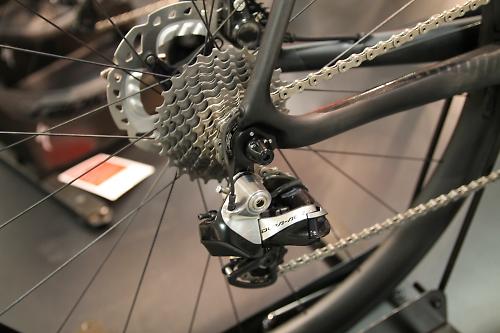 So, that’s all the new tech stuff covered, let’s have a look at a few of the bikes. There are seven Tarmac models for 2015, with the new frame used right down to the Tarmac Elite (£3,000). The cheapest three models use the older SL4 frame. Of the range three are available with disc brakes, starting with the Tarmac Pro Disc Race pictured below. 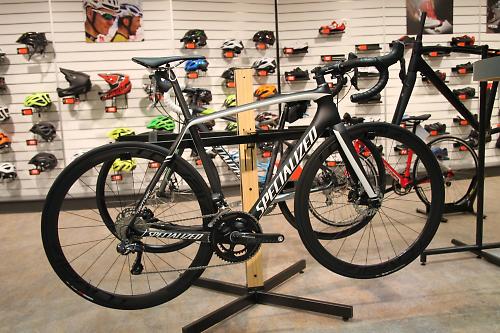 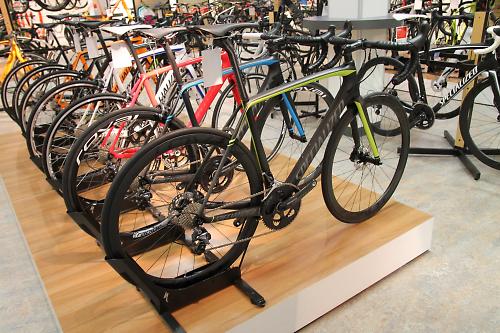 This is the next disc-equipped Tarmac in the lineup, the Tarmac Pro Disc Race (£4,500). Same frame and Roval Rapide CL 40 SCS Disc carbon clincher wheelset and Pro FACT carbon OSBB cranks, but the new Shimano RS685 hydraulic brakes and mechanical shifters with R785 hydraulic calipers - we wrote a first ride on these new brakes and were hugely impressed 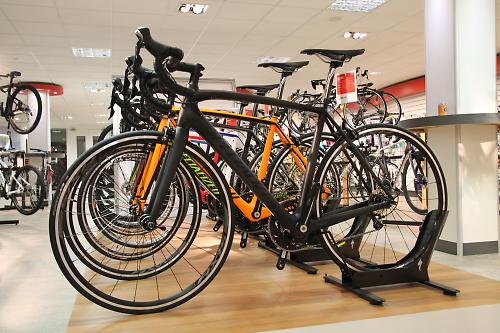 At the other end of the Tarmac range, is the Tarmac Sport (£1,500). It’s the most affordable model in the range, uses the older SL4 frameset rather than the new Tarmac frame higher up the range (the SL4 is a frame that was still being raced on the WorldTour this year and has many race wins to its name, so it’s no slouch). You can take your pick from two colours, this black or the brighter orange paint job you can see in the background. The Sport is equipped with a Shimano 105 groupset with AXIS 2.0 wheels and an FSA Gossamer chainset. 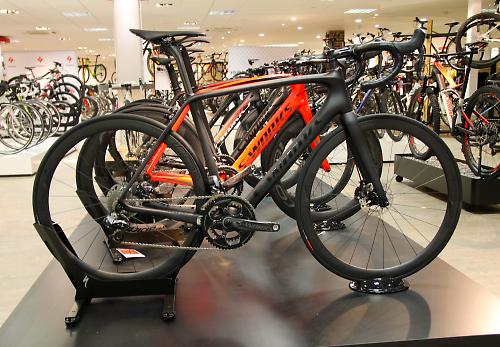 We've saved the best till last, possibly, depending on your bank balance, this is the Tarmac S-Works Disc (£8,000), and sits right at the top of a pile with a Dura-Ace Di2 groupset and RS785 hydraulic disc brakes. The non-disc version of the Tarmac S-Works is also available and costs £6,500.

Then there are the Roval Rapide CLX 40 SCS Disc wheels with CeramicSpeed bearings, and 24mm S-Works Turbo tyres and a Toupe Pro saddle. All proper top-end finishing kit.

The Roubaix SL4 goes into 2015 unchanged but there are now more disc-equipped models to choose from. The Roubaix has long been a popular model in the Specialized range, it was one of the first sportive bikes released nearly a decade ago, and continues to be a strong seller for the US company and very popular with UK cyclists. 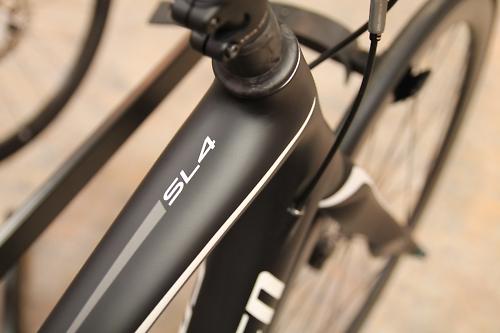 A disc brake version of the Roubaix was made available two years ago, and for 2015 they are offering four disc-equipped models in the UK market (last year there were only two disc Roubaix bikes in the UK) with the Roubaix SL4 Elite Disc (£2,000) kicking off the disc line-up. 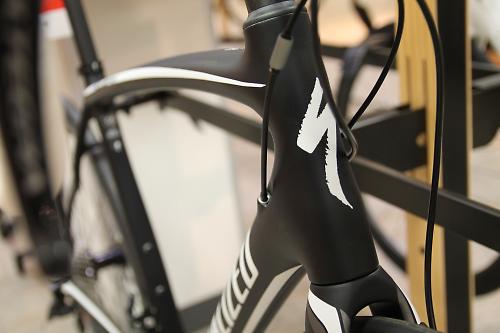 The Roubaix is a natural candidate for disc brakes, with its combination of speed and comfort ideal for UK riding. Unlike many other endurance disc-equipped bikes like the Giant Defy and Cannondale Synapse, Specialized have given the Roubaix Disc frame and fork mudguard mounts, making it ideal for year-round riding. 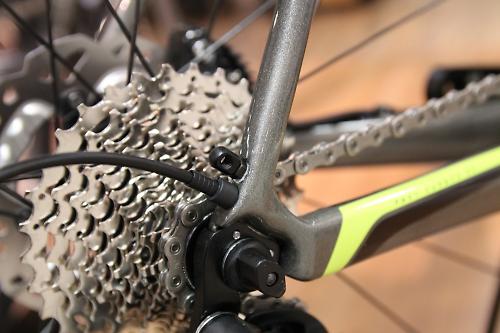 The mounts are neatly concealed in the frame, you wouldn’t notice them with a casual glance. 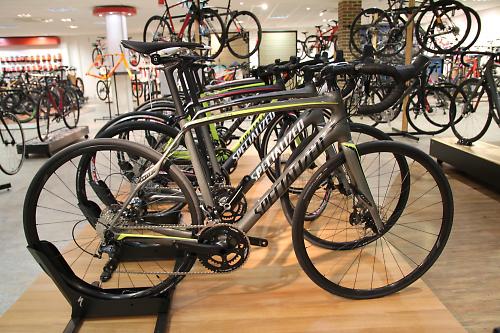 This here is the Roubaix SL4 Comp Disc (£2,500). It comes with a Shimano Ultegra mechanical groupset with the new R685 hydraulic brake levers. Other parts include the TURN Zayante cranks, AXIS 4.0 Disc wheels and FACT carbon CG-R seatpost. 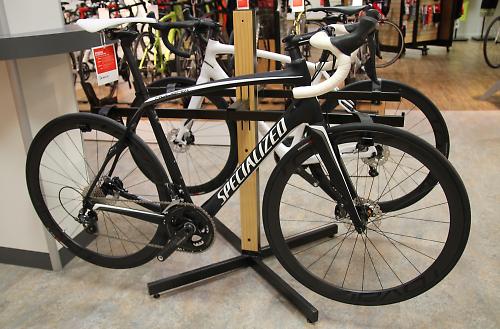 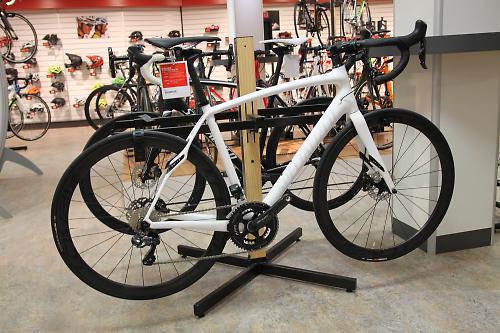 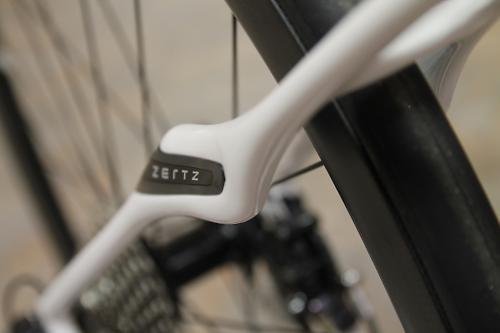 The white paint job might not be the most practical colour for a UK winter but it sure looks pretty. 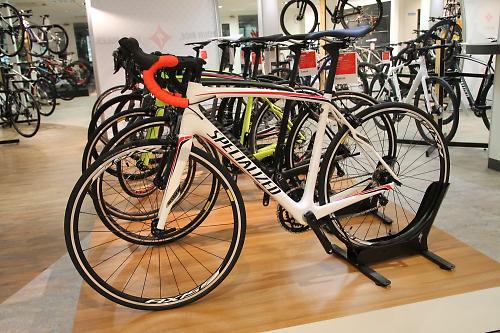 Moving away from disc brakes, and at the other end of the price scale, this is Roubaix SL4 (£1,300). Yes, the SL4 frame is used right across the range now. So the same frame essentially as the S-Works model that is raced on the WorldTour and has bagged many race victories over the years. 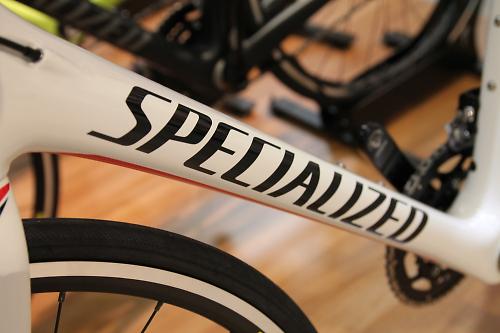 It’s equipped with a Shimano Sora groupset, available in either double or triple chainsets, with AXIS 1.0 brakes and wheels and a FACT carbon CG-R seatpost to provide further damping qualities.

The Venge, Specialized’s dedicated aero road bike and the choice of sprinter Mark Cavendish, hasn’t been changed for 2015, but there are some new colour options. 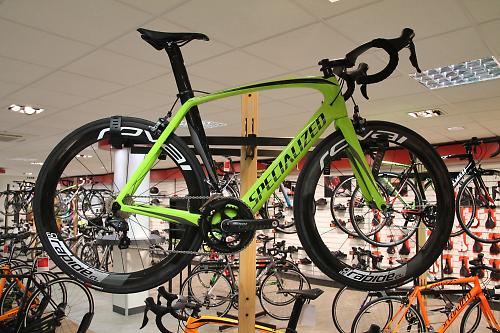 This is the top-end Venge Pro Race (£4,200), and comes in this green colour. It looks better in the flesh, my camera skills don’t really do it justice. The bike is equipped with Roval Rapide 60 carbon clincher wheels, Shimano Ultegra 11-speed groupset and features the new S-Works Aerofly handlebar. 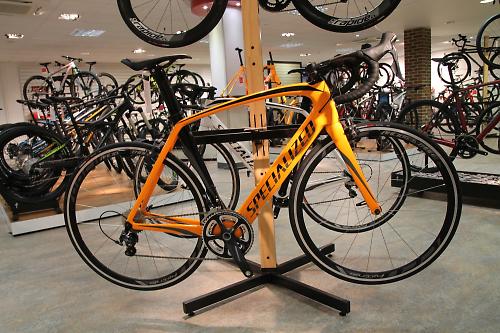 One rung down the Venge ladder is this Venge Expert (£3,000). You get an orange frame, Shimano Ultegra mechanical transmission with an FSA carbon chainset, Fulcrum S3 wheels and S-Works Aerofly handlebar. 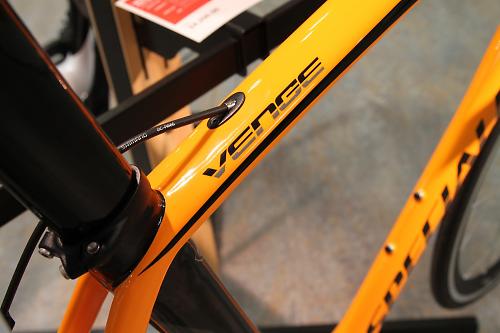 This is the S-Works Aerofly handlebar, spotted on the Venge, a new development from Specialized, and which is claimed to save 17 seconds over 40 km compared to a regular handlebar and stem setup. 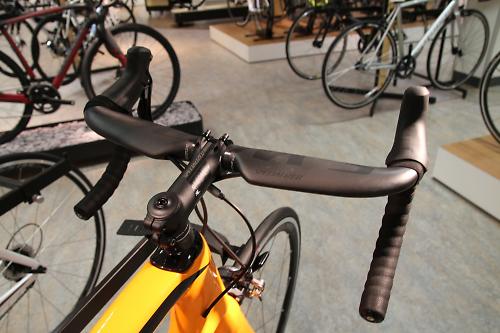 It seems aero bars are becoming a bit popular this year, with Cervelo also developing a similar aero handlebar, and Canyon an integrate handlebar and stem for their update S5. 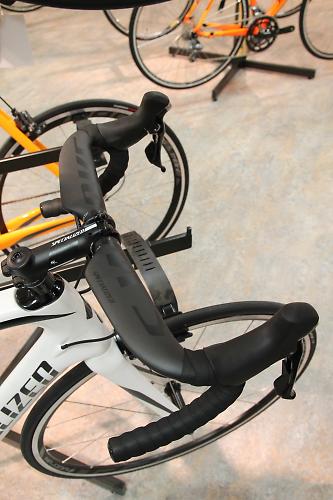 More highlights from the 2015 Specialized range soon. Check out www.specialized.com for more info on these new models.