Specialized’s Roubaix is the classic endurance road bike and this year it comes with SRAM’s new Red hydraulic disc brakes as an option. We took it for a spin last week at Eurobike.

Now before we start, we need to warn you about something: Specialized UK aren’t bringing the S-Works Roubaix SL4 Disc over to these shores. We thought you’d like to know that at the start rather than springing it on you right at the end. They will be offering the Roubaix SL4 Expert in an Ultegra Di2 build with Shimano’s new hydraulic disc brakes (£4,500), and there will also be a Sora build with Shimano 315 mechanical discs (£1,500). There are several non-disc versions of the Roubaix available in the UK too, but none that are SRAM-equipped.

Of course, if the Specialized S-Works Roubaix SL4 Disc – snappy name, that – does tickle your fancy, there are ways and means of getting your hands on one in the UK, it just won’t be as straightforward as nipping down to your local Specialized dealer with a credit card. It’s priced at $8,500 in the US, which is £5,441 at today’s exchange rate. And it’s the same price for a bike equipped with SRAM’s hydraulic rim brakes. 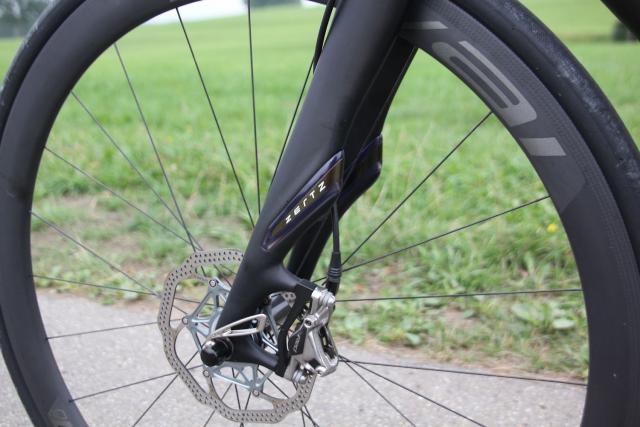 Right, with that out of the way, let’s crack on with the business in hand…

The Roubaix started the whole endurance bike thing – or, at least, it has come to be seen as the archetypal endurance bike, inspiring many designs from other manufacturers. To sum it up very briefly, the idea is that it provides a comfortable ride position that’s more upright and relaxed than that of a traditional road bike, and it is engineered to offer a smooth ride. In order to deal with vibration, Specialized scoop hollows in the trailing edges of the seatstays and fork legs, and plug the gaps with Zertz viscoelastic dampers. As well as absorbing buzz and impacts, the design is intended to keep the bike planted on rough roads, rather than skittering and jumping. A little birdie has told us that the Zertz material itself doesn’t do a lot, it’s the fact that the seatstays and fork legs have been shaped in this way that’s important. Specialized’s slim (27.2mm) CG-R carbon seatpost is designed to provide more vibration damping. It’s a curious-looking piece of work but the idea, as you can tell just by looking at it, is that it offers a generous amount of give – vertical compliance, if you like – to isolate you from bumps and buzz. That’s another Zertz insert within that switchback section at the top.

The CG-R post is actually more solid than it looks. It doesn’t flex as soon as you sit in the saddle, but you can feel that it’s quite active as you ride along. Specialized reckon it will provide up to 18mm of movement if push comes to shove. The fitting of 26mm tyres (they’re S-Works Turbos with BlackBelt puncture protection) is intended to provide more comfort. 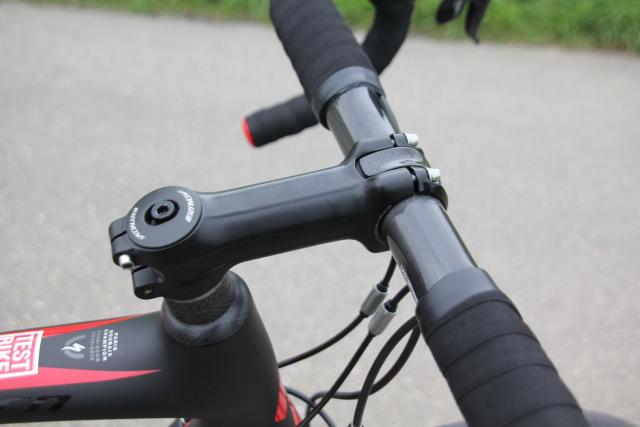 We’d love to tell you how successfully this Roubaix deals with vibration but that’s pretty much impossible to tell on the roads around Friedrichshafen, Germany. The road surfaces around there are glassy smooth. You could ride a boneshaker out there and it would feel absolutely fine. Having ridden plenty of Roubaix bikes in the past, we suspect this one will be right up there when it comes to papering over the cracks, but we couldn’t tell you for certain. I know that makes this First Ride a bit like Hamlet without the prince, but short of rolling up our own section of British road and taking it to Germany with us, there's not a lot we can do about it. 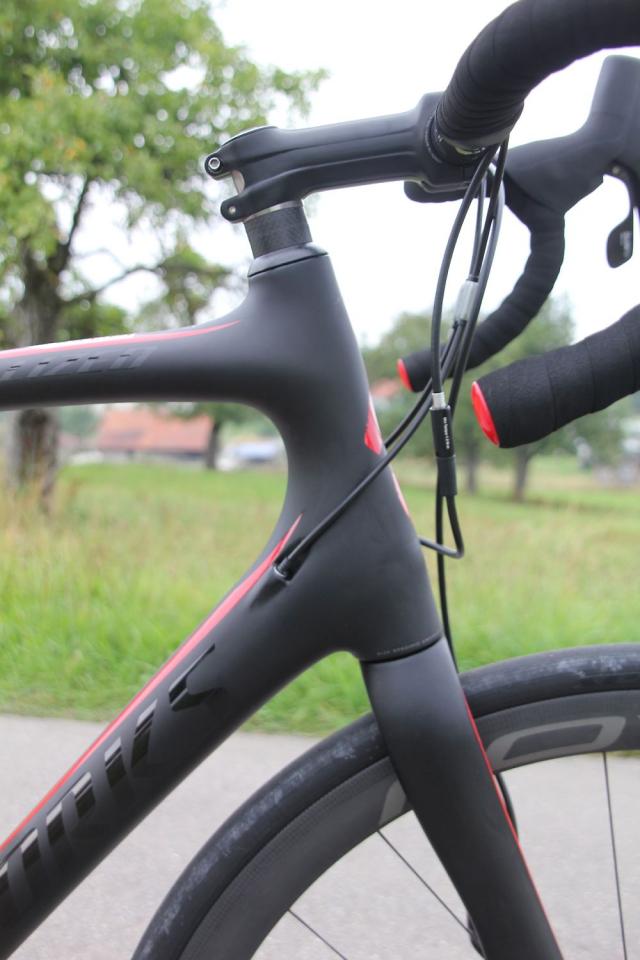 What we can comment on with confidence is the geometry. I was on a 58cm model but I’ll tell you about the 56cm size because that’s one that more people can relate to. The 56 comes with a 565mm effective top tube and a 19cm head tube. The stack is 590mm and the reach is 387mm.

Essentially, that means that the ride position is short and high. I found the front end too high for my taste, to be frank. I like quite an aggressive ride position and here the handlebar height was boosted by the inclusion of 20mm of headset spacers on top of an 8mm cone spacer. That’s just me, though. You might love the set up – and you’d obviously want to check it out closely before laying down this kind of money. What’s certain is that if you do want a more relaxed ride position, you’re better off going for a bike with a tall head tube, like the Roubaix, rather than a bike with a short head tube and a bunch of spacers. A big stack of spacers can spoil the handling.

Unusually, Specialized vary the length of the chainstays slightly according to the frame size, and the Roubaix has a long wheelbase (1,011mm on the 56cm model). This results in a bike that’s more stable than it is manoeuvrable. 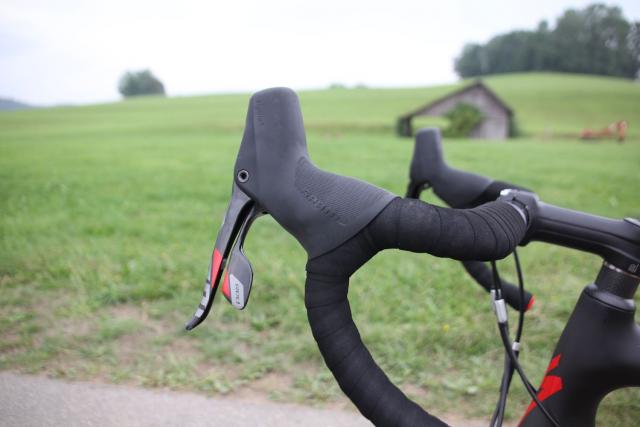 Specialized also alter tube diameters, seatstay angles and the carbon-fibre layup for different sized frames to get the same performance across the lot. They alter the size of the lower headset bearing according to the frame size too. Like pretty much everyone else, Specialized use a 1 1/8in bearing at the top, but the bottom bearing is either 1 1/8in, 1 1/4in or 1 3/8in depending on the frame size, the idea being to create a more stable and balanced ride across the range.

850 words in and I’ve not mentioned the hydraulic disc brakes. That must mean there’s a lot to talk about here. We’ve been through the SRAM Red 22 brakes in a huge amount of detail in the past so check up our previous write ups for the full story on them. By now you probably know whether or not you’re into the idea of disc brakes for road bikes and I won’t try to influence you one way or another. What I would say, though, is that if you’ve not yet had the chance to try them out for yourself, do so. I’m not entirely sold on the idea if you’re guaranteed dry conditions, but it hoofed it down just after we took these shots and the brakes just carried on performing super-strong… But give them a spin and make up your own mind. One thing we didn’t do with the Specialized S-Works Roubaix SL4 Disc was weigh it, but although it’s a big, rangy bike with disc brakes, it felt lively and those Roval Rapide CLX 40 wheels spin up to speed quickly. Really, though, I should have gone a size smaller for more chuck-it-around potential. I couldn’t get right over the front end of the 58cm model when riding out of the saddle. Mind you, if you’re after an endurance bike that you can pedal all day, maybe that’s not as high on your list of priorities as a comfortable ride position – and you certainly get that with the Roubaix.