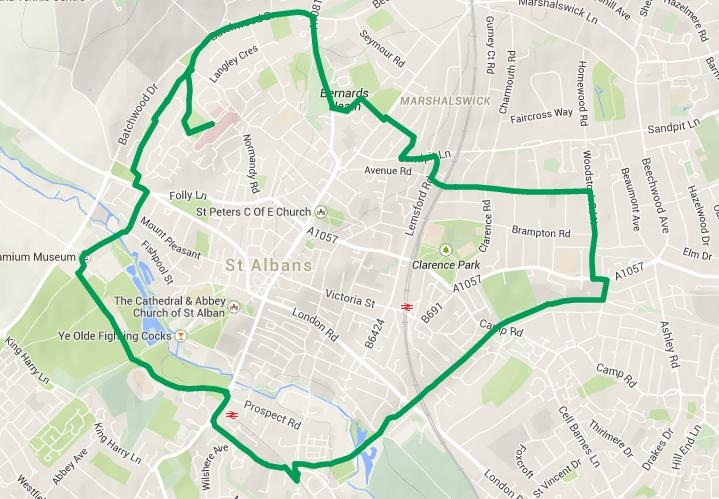 The Herts Advertiser reports that work has begun on the Green Ring, a 9km walking and cycling route that will encircle St Albans city centre. The £1m scheme funded through the Department for Transport’s Local Sustainable Transport Fund (LSTF) could be complete in nine weeks’ time.

The Green Ring is a joint venture by Hertfordshire county council and St Albans district council. New cycle paths and road crossings are to be created to link up with the current cycle and road network to create a 9km route circling the city. The concept came about as part of the ‘City Vision’ for St Albans in 2009; an application was made for LSTF funding; and £1,091,000 was allocated for the project.

Terry Douris, county council cabinet member for highways, said that the Green Ring had been designed to increase use and enjoyment of the city’s green space. He added that the provision of easy and attractive cycle and walking routes would also help to improve the health and well-being of local residents.

“The Green Ring will make it easier for people to get around St Albans on foot or on bicycle. The District Council has almost completed upgrading cycling and walking paths along the route. Now work to link these paths is being carried out on behalf of Hertfordshire County Council at key junctions. Once this work is finished in the spring, the Green Ring will be open for everyone to use, helping to enhance their enjoyment of our beautiful city.”

One of the sites listed for construction work is at Hatfield and Sutton Road around Morrisons. However, cycling campaigners have been critical of recent work in this area. Work to widen the Alban Way, a 3m shared footpath and cycleway which will eventually form part of the Green Ring began in October, but Peter Wares said that the path still wasn’t wide enough.

“It should have been widened by 2m as 0.5m is not enough. It is going to be even more used when it becomes part of the planned Green Ring route. Some people feel we shouldn’t be chopping down the trees as they are oak and are of some value but they will still have to come down in a few years’ time because the problem is going to get worse.

“The trees will continue to grow out across the path, which will inevitably lead to further narrowing and I feel at least one of the trees should have been removed as a compromise.”

While acknowledging that the path wasn’t perfect, Daly disagreed. “There is a compromise between protecting the trees and encouraging people to use the footpath. I frequently use it as a cyclist and have never encountered a problem with it being too narrow and I would think this is common sense as a cyclist.”