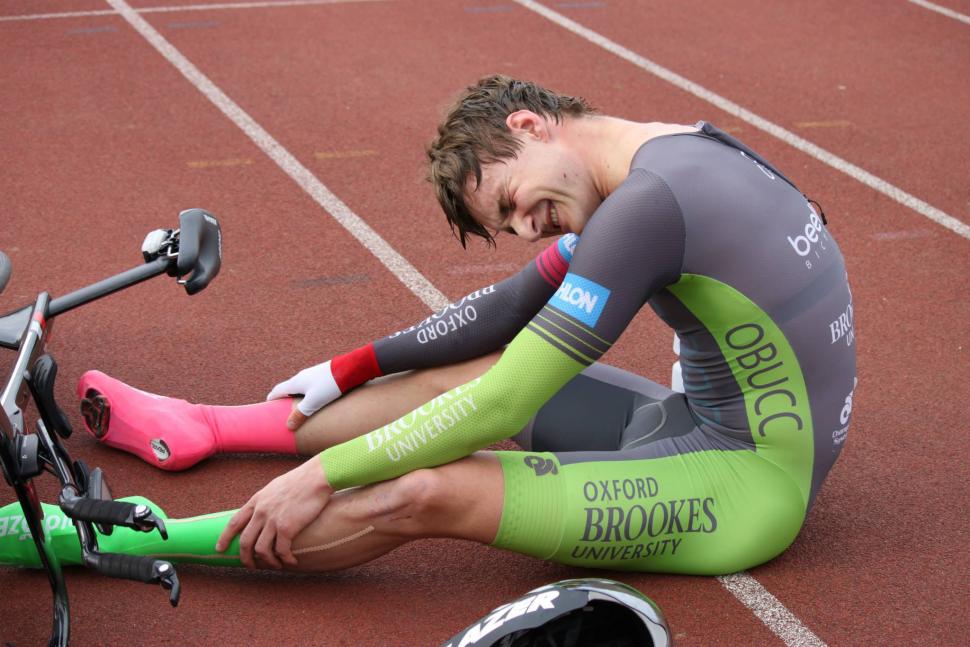 Student sets himself Hour challenge - and rides 46.7km - Fancy seeing if you can beat him?

A student in Oxford has had his own crack at the Hour record – and rode just shy of 47 kilometres last Wednesday. With the UCI Hour record back in vogue and Sir Bradley Wiggins among those planning an attempt, Dan Bigham says he hopes he has set a benchmark to inspire other students to have a go themselves.

Bigham, who studies at Oxford Brookes University and is a member of Beeline Bicycles RT and Cowley Road Condors CC, recorded his ride last Wednesday afternoon at the outdoor track at Reading’s Palmer Park Stadium – where competitive racing is currently suspended on safety grounds – on Strava.

Commenting on the post of his ride there, the 23-year-old from Stone, Staffordshire, said: “I was in a world of pain at the end, just fell off the bike and lay there for a while. Hamstrings are destroyed.”

So why did he decide to take on a challenge that even seasoned pros such as multiple track world champion Jack Bobridge have described as the hardest thing they have ever done on a bike?

“I did it because I found a nice vein of form these past few weeks and with BUCS [the British Universities & Colleges Sport track championships] just round the corner I wanted to set a benchmark, both for myself and for others to look at and go ‘I fancy a go at that.’

“I had an inkling of the distance I could do, but I went to the track on Monday to perform some aero testing, from which I settled on 47km as an achievable target. On the day it didn't go quite as well I had hoped.

“My legs were still quite fatigued from Sunday's Brill Hilly TT where I'd totally buried myself, and was 14w down on what I had aimed for and what appeared possible.”

He also outlined his goals for the months ahead: “Plans for the future are to absolutely smash the BUCS TTs. I've ridden the 10 course a lot, and just raced on the 25 course today, taking the win. I also hope to go well at BUCS RR and Track Champs (despite not racing on an indoor track ever and not currently owning a track bike!).

“I also plan to have a go at the hour record indoor when I'm fresh (probably summer) as I think 49-50km is doable on a track bike with the better aero indoors. I also will be targeting the National 10 and 25, and the National Elite TT Champs!

Jonny Revis of Cowley Road Condors, who is president of the Oxfordshire Road Race League, told road.cc that Bigham progressed from 4th to 2nd Category last year and was second overall in the league with “some pretty epic wins, usually from a breakaway,” adding that “his most formidable weapon is his time trialling ability.”

He described the 46.7 kilometre ride, undertaken on a Trek Speed Concept supplied by Beeline Bicycles, as “a heroic effort from a guy who was a 4th cat rider this time last year.”

We’d love to hear from any other students who have had a crack at the Hour themselves, or are thinking of doing so.

If you fancy having a bash, upload the ride to Strava and post the link in the comments below, together with a bit about yourself - age, where you study, etc.

Besides aiming at Bigham’s distance, let’s see how close anyone can get to Rohan Dennis’s UCI Hour record of 52.491 kilometres, set in February.