Three models of new go anywhere road bike - including SRAM 1x version - on the way. We get our hands on one
by Tony Farrelly

Cannondale have released another video featuring their new Slate gravel/adventure/gnarmac (think about it) bike and we’ve also got our first chance to take a look at one in the flesh at the recent CAAD 12 and SuperSix Evo launches in Austria.

The video and our pics also show that there’s going to be more than one Slate - in fact Cannondale have now told us it will be a three bike range. The bikes in the video are Slate 105s, I wont insult your intelligence by telling you what the groupset is. Okay I will then, it’s Shimano 105, well the front and rear derailleurs, chain, and cassette are. The 52-36 chainset is Cannondale’s own BB30a Si offering. Shifters are Shimano R505 non series hydraulic mechanical shifters.

The bike we got to see and photograph was the Slate Ultegra. This model comes with Shimano 6800 in place of 105 as well as upgraded Shimano hydraulic brakes, and a Cannondale Hollowgram Si chainset and a Cannondale C2 Carbon seat post in place of the alloy one on the Slate 105. The bike we saw had 38mm Maxxis Detonator 650b tyres rather than the 42mm tyres that will come on the production version. The Slate will run tubeless tyres. 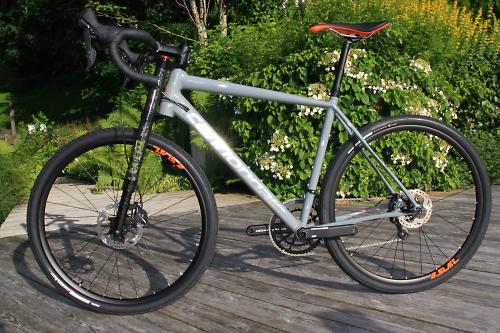 The third, and as yet unseen model in the range is the Slate Force CX1, which replaces all the Shimano bits with SRAM CX 1x and Force components. So the drivetrain is a 10-42 cassette matched to a Cannondale Hollowgram Si BB30a crank with a 44T Spider ring - hence the band on front mech on the two Shimano models.

What colour is it going to be? I’m guessing black with maybe some purple details… I dunno, maybe the cranks and the front hub, but that’s just a guess. Although they would neither confirm or deny my guess, those who've seen pictures inform me that it will look "sick to the power of rad." But looks are such a subjective thing.

The new vid showcases once again the Slate’s all road/adventure… no, let’s stick with gnarmac - credentials as Cannondale’s road product manager, David Devine and Tim Johnson of Cyclo-cross World put it through its paces on the roads, hills, and trails of northern California locking out the Slate-specific Lefty Oliver fork for the road climbs but getting the full benefit of its 30mm of travel on gravel road and singletrack descents.

They aren't hanging about either - Cannondale obviously being keen to emphasise that speed is also part of the Slate's all-rounder armoury. That's further underlined by the bike's riding position - which Cannondale say is half way between the all out race position of the SuperSix Evo and the more relaxed endurance position of the Synapse.

The video also features the duo riding in the rain, and while they don’t stop to slap on some mudguards (the Slate does feature eyelets for rear guards) it does showcase the tencious grip offered by the combo of the short 400mm chainstays when hooked up with properly fat tyres.

So having watched the vid and seen the bike for ourselves - unfortunately we only saw it because Cannondale were showing a non-rideable sample, what more can we learn about the new machine?

Well, although it's a very different bike from the CAAD 12 it does shares some notable similarities.

Like all of the new CAAD 12 range the Slate(s) are all Di2 compatible - giving you the chance to upgrade to electronic at some point in the future and laying open some interesting future speccing opportunities for Cannondale - esp if/when Shimano 105 Di2 hoves in to view. 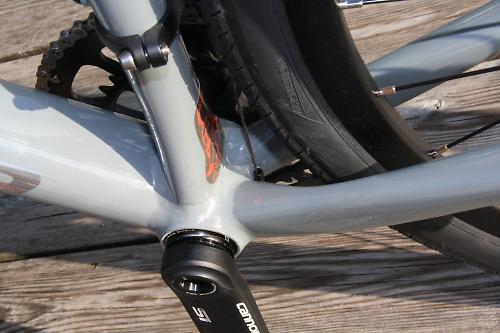 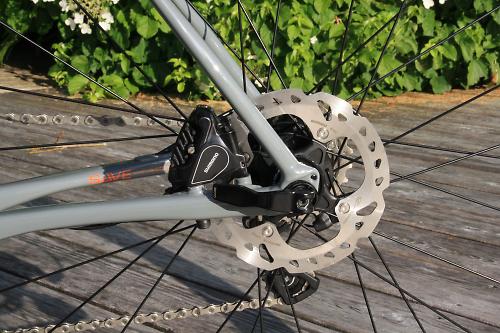 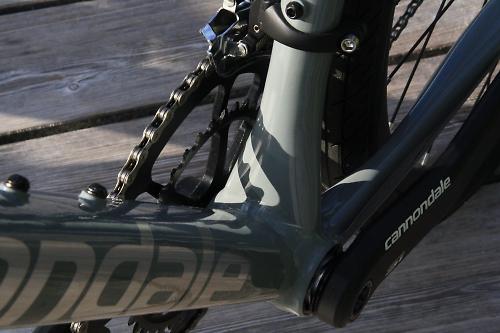 Cannondale have used the same True Flow Modelling system they used on the CAAD 12 to prototype and test the tube profiles, shapes and wall thicknesses. Indeed they’ve used some of the same shapes so the the seat tube uses their Delta profile - seen on both the new CAAD 12 and the SuperSix Evo - which flares at the seat tube junction for added stiffness but narrows from the mid section to give a bit of compliance to the rider. 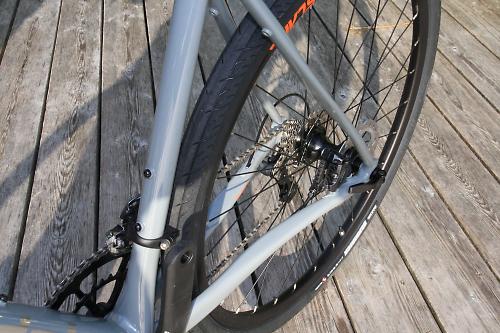 Like the CAAD 12 the Slate utilises Cannondale’s SAVE micro-suspension system to boost rider comfort. SAVE basically combines strong but compliant tube shapes, profiles, and wall thicknesses with a compliant seat post. In the Slate’s case this is a 27.2mm post - which means you can also retrofit a suspension seat post if you want. Cannondale’s performance road bikes have moved to 25.4mm post diameters to get their dose of micro-suspension via more for and aft flex. 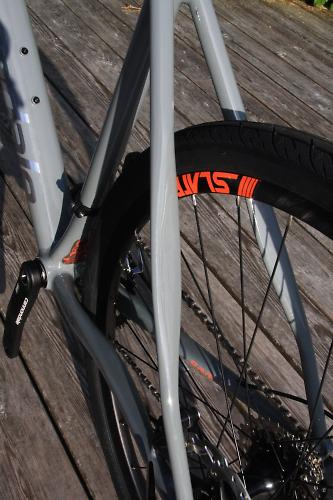 The other difference is that while the Slate’s seat stays are thin they have the flattened profile of Cannondale’s Synapse sportive/endurance bike rather than the pencil thinness of the CAAD 12’s stays. That’s because the Slate’s shorter back end needs the extra flex afforded by the Synapse shaped stays to help mitigate the stiffness caused by that shorter length.

While the Slate’s rear triangle is notably shorter than the CAAD12, the chainstays feature the same smooth, squared profiles, with none of the dents or kinks traditionally associated with aluminium frames. That smooth appearance is something typical of both frames - at first glance you wouldn’t know either the CAAD 12 or the Slate was an aluminium bike.

So that’s the similarities, what about the differences? 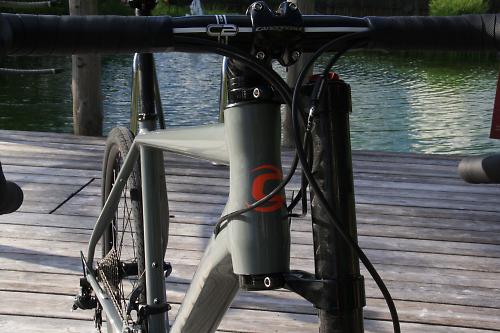 The most obvious two and ones we’ve already talked about are the wheel size - 650b and that Lefty Oliver fork.

According to Cannondale the Slate’s 650bs shod with 42mm tyres gives the same outer wheels circumference as a 700c road wheel with a 23c tyre. Giving the claimed benefits of road speeds, with limpit like grip - especially in the corners and masses of comfort and a super-smooth ride. Certainly looks grippy in the vid - you’d hope though eh? 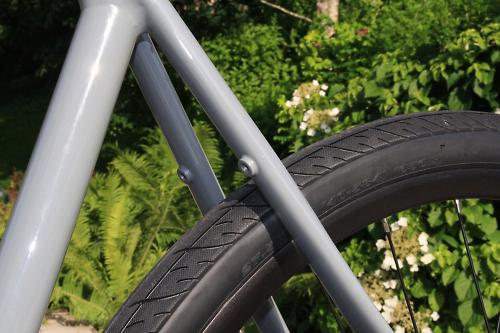 Comfort and smoothness and control looks to be the name of the game with the Lefty Oliver fork too. According to the Cannondale tech blurb I caught a sneaky peek of, the fork is designed to give 30mm of travel, with (this bit’s for mountain bikers) “heavily tuned low speed compression damping” and a “unique COG (Coil over Gas) negative spring to minimise bobbing. PBR on-the-fly lockout and rebound adjustment. Carbon outer structure and OPI forged alloy inner leg.” Before adding rather unnecessarily you might think given the level of competition “it's the most capable front suspension the road has ever seen." 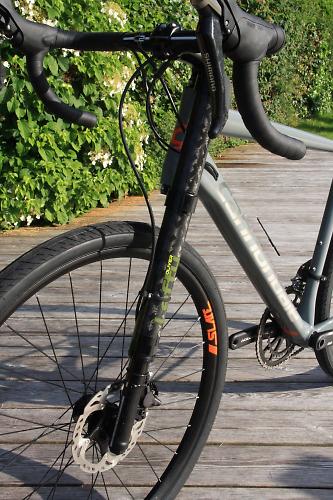 Up close and personal the Lefty looks a very capable bit of kit indeed. In theory at least the fork/tyre combo matched up with those short rear stays, the Slate’s long centre to front, and slack head angle - a geometry setup Cannondale dub “Full fun” should make for a very forgiving bike for gnarmac* novices venturing off the blacktop. Having picked it up it’s not outrageously heavy either, another big plus point. 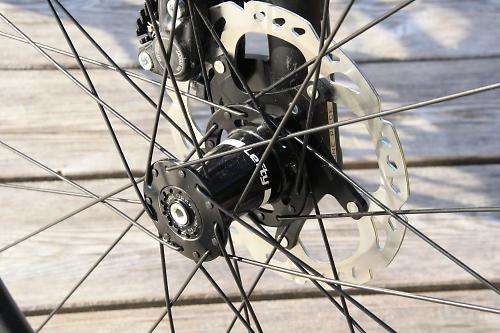 One last thing that’s worth commenting on. As you might have noticed the Slate has thru-axles front and rear - Syntcw 142x12mm as it happens - given that it is designed to go well off the beaten track this shouldn’t be a surprise, they’ve been pretty much the norm on mountain bikes for years to boost handling and lessen the chances of front wheel ejection - off-roaders used to worry about that back in the day with some justification. Oh, a thru-axle also means that you worry less about aligning your wheel and disc brake - so the rotor is always in the right place, minimising the chances of wheel rub. 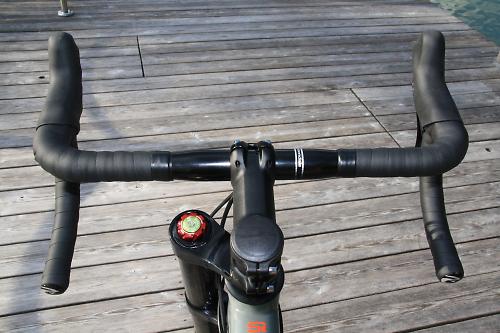 Now that we've had a Slate in our hands and seen some of the new gnarmac/gravel/adventure bike competition such as the Merckx Strasbourg 71 one thing that does occur is that Cannondale could create even more of a stir by making a Slate with a rigid Lefty fork. The Lefty Oliver looks cool, but it also looks like it is going to account for a fair chunk of the change a Slate will cost. Given that the frame also incorporates a Headshok anyway and the bike has the benefit of 42mm tyres - you would wonder whether that isn't more than enough bump-taming capability for a lot - if not most - of its potential customers. Cannondale do make a rigid Lefty it featured on one of their Bad Boy commuter bikes, and the Hooligan also has a rigid monoblade fork too. Easy win we'd say.

We’re hoping to see the Slate range in its full glory at Eurobike at the end of August and we’d expect it to launch either just before or just after that and we predict it will be available in four sizes: small, medium, large and extra large. We’ve got our name down for a test bike already.

*If they’re having 'Full fun geometry' we're having gnarmac.