Fabric unveils lots of new cycling products for 2016, we've been checking them out
by David Arthur @davearthur

Fabric, a brand launched last year by the people behind Charge Bikes, has made quite a name for itself in a short space of time with its range of saddles and bar tape, but for 2016 it is expanding its offering with the launch of a new Chamber multi tool, Cageless Water Bottle and three new saddles. 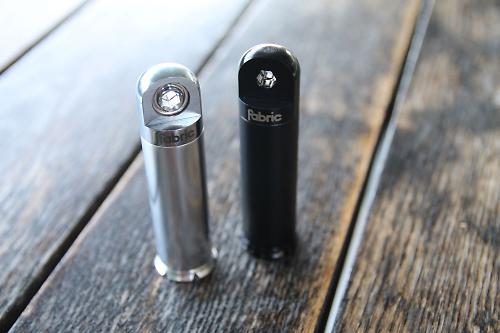 The Chamber is a compact and very smartly designed multi tool. It is available in two versions, a fixed head or a ratchet head, but both contain 13 tools, held inside a caddy which when slides into the chamber. Very easy to use. The Chamber Fixed will cost £29.99, the Chamber Ratchet will be £34.99

Fabric set out to design a multi tool that was smaller, lighter and more functional than other similar multi tools available in the shops. One advantage of the Chamber, according to Fabric, is the ease of access to bolts in tightly restricted areas - some seatpost clamps instantly spring to mind.

“Functionality, reliability and durability are first and foremost with any Fabric tool,” says Fabric. “But we go further, ensuring our strong design ethic is reflected in everything we do and that we bring real, tangible benefits to cyclists in everything we make.” 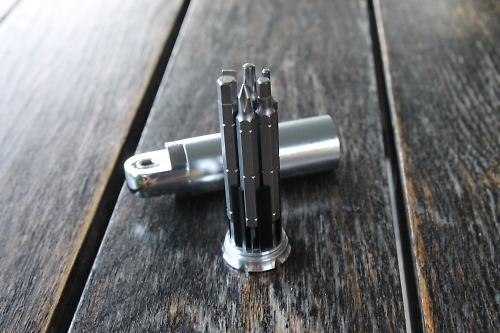 Tools available include 2, 2.5, 3, 4, 5, 6 and 8mm Allen tools, two Phillips and two flat head screw drivers, plus T10 and T25 Torx bits. To use, it’s simply a case of removing the tool bit you want from the caddy and sliding it into the head of the chamber case. The position can be adjusted so you can get more leverage or better access in tighter spots. 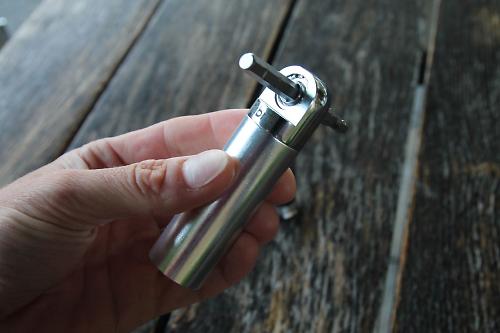 The ratchet head version is the most ingenious, and offers further functionality than the fixed head model. Fabric has developed its own very small, double-sided ratchet. 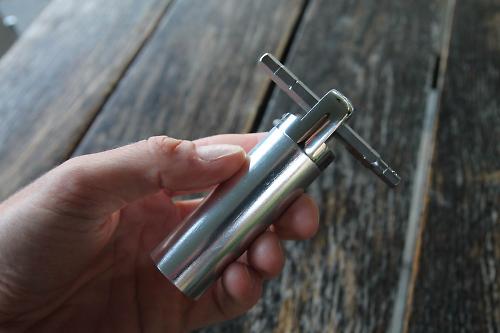 You simply switch the tool bit from one side to the other to tighten or loosen the bolt. It’s intuitive with a satisfying action. The fixed Chamber weighs 162g, the ratchet one is 165g 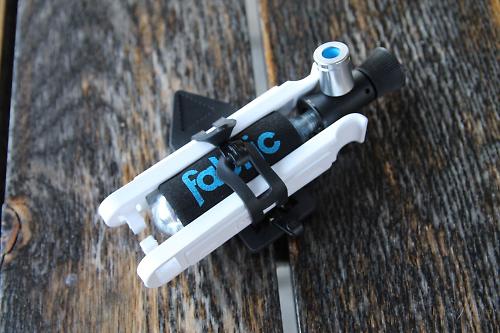 Another new addition is the Co2 and tyre lever kit. A thick silicone band wraps around the Co2 canister and two tyre levers, and the whole lot can then be stuffed into a bag, pocket or, using the supplied mount, fixed to the seatpost. 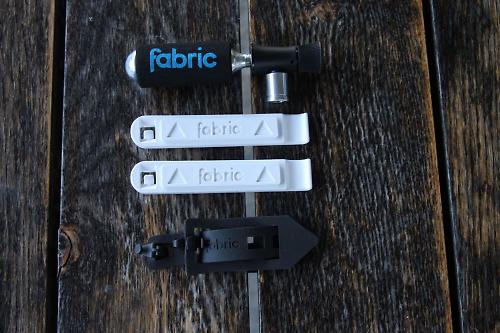 The launch event was the first chance for us to see the company’s new Cageless Water Bottle. It dispatches the traditional water bottle cage to the history books, and replaces it with two small bottle bosses that hook into the specially designed water bottle. 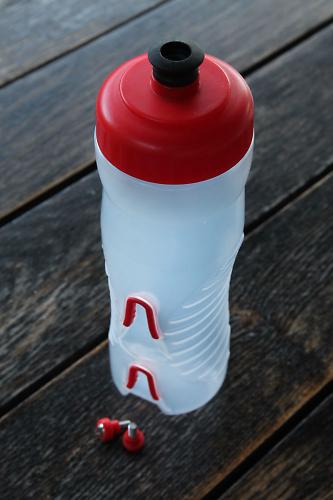 It’s taken the company over a year to develop it and speaking to Fabric it’s clear that they didn’t just want to make another water bottle when they embarked on this project, instead wanting to make something better while adding extra customer benefit to a product that most probably take for granted. 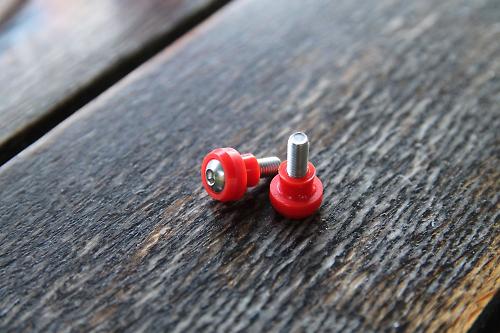 The Fabric Water Bottle offers unique selling points, which according to Fabric include its light weight (just 3g), lack of cage, clean lines and the fact that, at £9.99, it’s cheaper than a regular bottle and cage which you normally have to buy separately. This is a whole system, you get everything you need in one package. 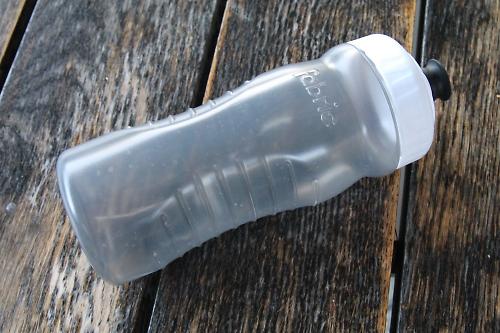 Fabric has much more up its sleeves with this product, and reckons there are plenty of opportunities for adding more choice, including the obvious like extra colours and graphical designs, but more interestingly insulated and aero water bottles. We reckon the concept could easily be expanded to other uses as well, such as tool cases or food boxes for bikepacking or triathlon uses. 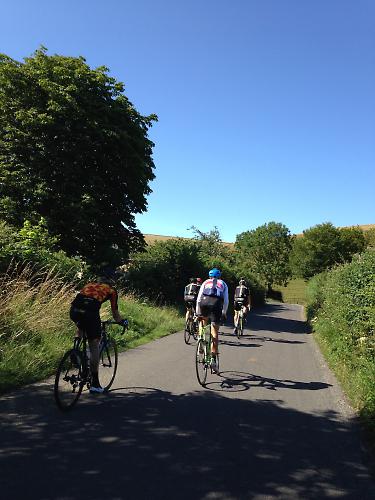 I had the opportunity to try out the bottle on a hilly ride around Somerset with the Fabric boys and assembled journalists. Trying anything new can take a period of adjustment, especially when the action of extracting and replacing a water bottle into a cage is one that’s so ingrained from so many years of cycling. Think about how often you might use a bottle on a regular ride. A lot is probably the answer. 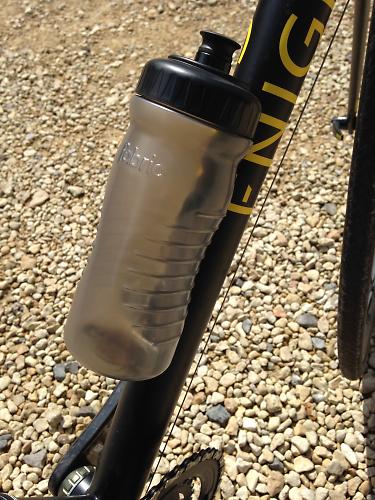 The Fabric Water Bottle though is intuitive. The action required echoes that of a regular bottle and cage. Removing it is a cinch, it comes right of those two bosses with only the merest tug required. Relocating it requires a bit more accuracy and a firm push. I found myself look down at the beginning of the ride, but towards the end of the 60km loop, I was able to stick the bottle back on without taking my eyes of the road. I’m sure it’s an action that would become as second nature as using a regular bottle cage is after a few more rides. Look how smart the bike is without the bottle attached. Obviously the bottle has to be positioned with the recesses facing down, but that never proved to be problem. The shape of the bottle does ensure you’re not likely to try and remount the bottle with it upside down. 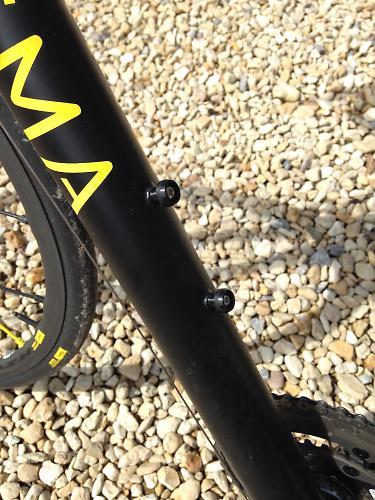 The actual bottle itself is very nice to use. The nozzle dispenses a decent flow of water, and can be locked down. The plastic is very squeezable and it’s shaped in such a way that it comfortably fits in the hand. A series of ridges on the side provides a bit of extra grip, useful when on a hot and sweaty ride, as was the case on this occasion.

I’ve taken a bottle away with me and will continue to test it over the following weeks, so watch out for a full review soon. First impressions are good, but the big question is can it replace a regular water bottle and cage? I’ll soon find out.

Fabric’s first saddle, the Scoop, has been hugely popular, so much so that it won the recent road.cc People’s Choice awards. And after teasing us with new saddle models a year ago, Fabric has finally added the Line and Cell saddles to its 2016 range. 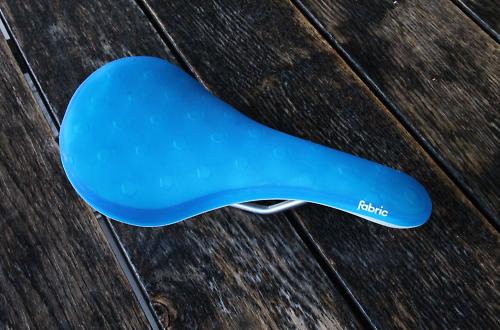 The Cell is the most unusual looking saddle, with a unique construction technique borrowed from a well known trainer company. It’s a saddle built for the utmost comfort, not performance, and Fabric reckons it surpasses the Scoop for comfort which is impressive as the Scoop isn’t short on comfort. We reckon this would be the ideal saddle for touring, Audax and adventure bikes, where comfort priorities trump outright speed. 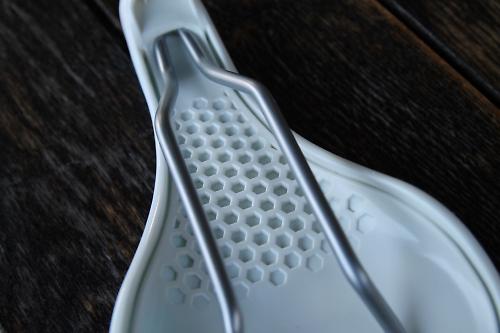 The saddle top comprises deformable pyramid structures with air pockets, which it calls Hex-air. Each cell can compress individually, Fabric claims this maximises comfort at all times but the saddle keeps its shape through the life of the saddle. The Cell comes with hollow chromoly rails and a claimed weight of 360g. It’s wider than Fabric’s other saddles, measuring 155mm - the widest Scoop is 142mm. The Cell costs £49.99. 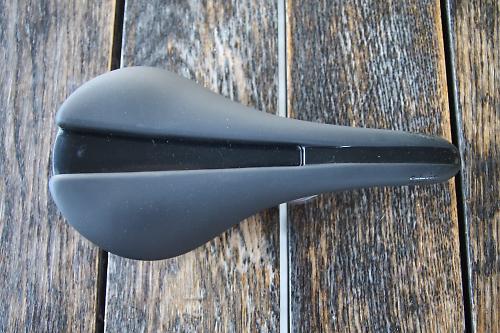 The Line is another brand new saddle that we’ve seen before, but it’s finally released now. Compared to the Cell, this one is all about performance. It’s based on the Scoop but provides a 10mm deep pressure relieving central channel. The new saddle is also 6mm narrower than the Scoop, being 134mm wide. 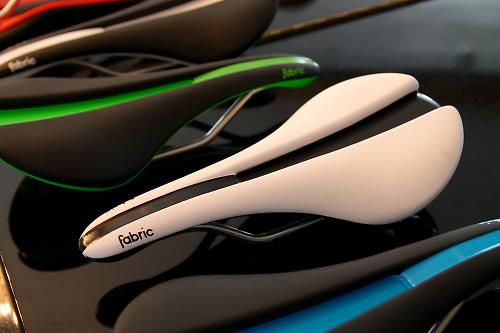 Fabric says the three piece construction of the Scoop made it possible to add the channel without having to reinforce it. It’s available with hollow titanium rails and a claimed weight of 237g, or hollow chromoly rails for a 250g weight, and is priced £59.99 and £39.99 respectively. 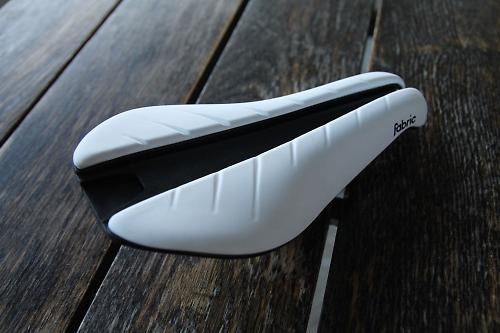 Lastly, Fabric has launched the new Tri saddle, which as the name kind of gives away, is a triathlon saddle. It may interest time trial cyclists as well. It’s much shorter than the company’s other saddles and has a wide central relief channel with angled drainage indents across the top of the saddle.

“It’s designed for performance but not at the expense of comfort,” says Fabric. 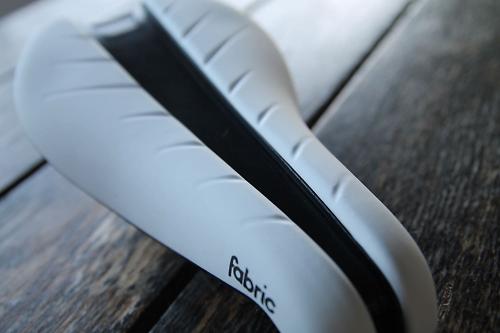 Rather cleverly Fabric has developed a clip-on bottle mount that attaches to the rear of the saddle. The Tri saddle costs from £49.99 and is available in an array of colours. 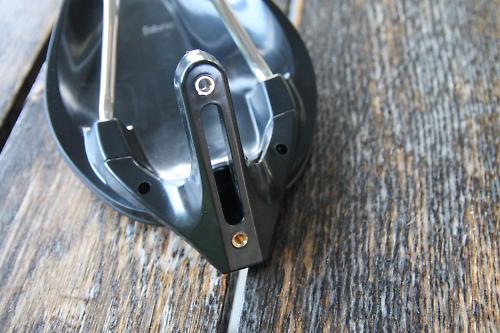