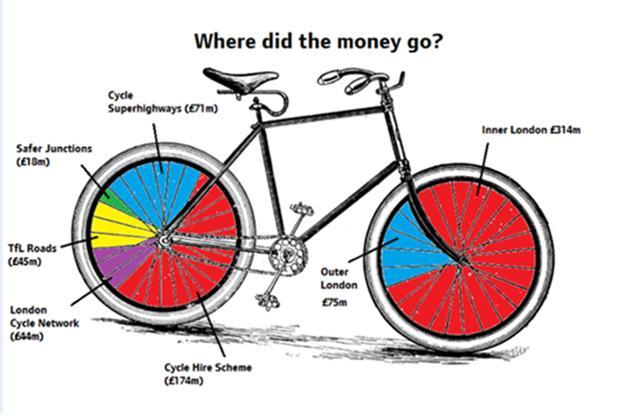 Cyclists in outer London boroughs have been failed by Mayor Boris Johnson, a report by the Green Party ahead of this year’s Mayoral election has claimed.

Just a fifth of money set aside to fund infrastructure improvements has been spent in the outer boroughs since 2008, according to London Assembly member Darren Johnson - who calls on the next Mayor to make the situation more equal.

The research suggests that inner London boroughs have benefitted from £314m of cycling schemes while outer London benefitted by just £75m.

This comes despite two thirds of all outings by bicycle being made in the outer boroughs.

Mr Johnson said: “We are now seeing some top quality cycle lanes in parts of central London and that is very welcome, but people who want to cycle in outer London have had a raw deal while Boris Johnson has been in office.

“We know that millions of short suburban car trips could be made by bike instead, freeing up road space, cleaning up the air and making people fitter. This Mayor dithered for years, then finally started to build some quality schemes such as the Waltham Forest mini Holland.

“The next Mayor must expand this programme and complete all of the superhighways and quietways in the pipeline to kick start an outer London cycling revolution.”

Boris Johnson’s own research has found that while over  2.7 million outer London journeys could reasonably be cycled every day from start to end, just a fraction of these trips - 133,000 of them -are taken by bicycle.

Mr Johnson created an infographic showing who the spending had been allocated - and says it proves how the top 5 projects  funded by the Mayor(left wheel) overwhelmingly benefit inner London.

He says that the large amounts of money needed to engineer and follow through ambitious projects in car-heavy London boroughs like Brent just weren’t supplied - with only £300,000 allocated to that borough.

And of 12 proposed cycle superhighway routes into the city, only five will be completed by the end of Boris Johnson’s reign. In Hounslow, where Cycle Superhighway 9 was to be built, an ‘inflexible council’ caused the planning to be ‘bogged down’, said Darren Johnson.

In Enfield, he said, a proposed Mini Holland will not be ready till 2018, and in the meantime cyclists face dangerous routes.

As we reported last year, Oxford Street is likely to close to motor traffic, and cyclists to be allowed to turn left at red lights, after this year, since the biggest London mayoral candidates have agreed to pursue the policies, if elected.

In response to Stop Killing Cyclists' 10 by 2020 campaign, which sets out ten asks for mayoral candidates, there was unanimous support to improve air quality on one of Europe's most polluted streets and, perhaps more surprisingly, for the Idaho Stop law (link is external), named after the US state where cyclists can treat red lights as stop signs, and proceed if the way is clear.