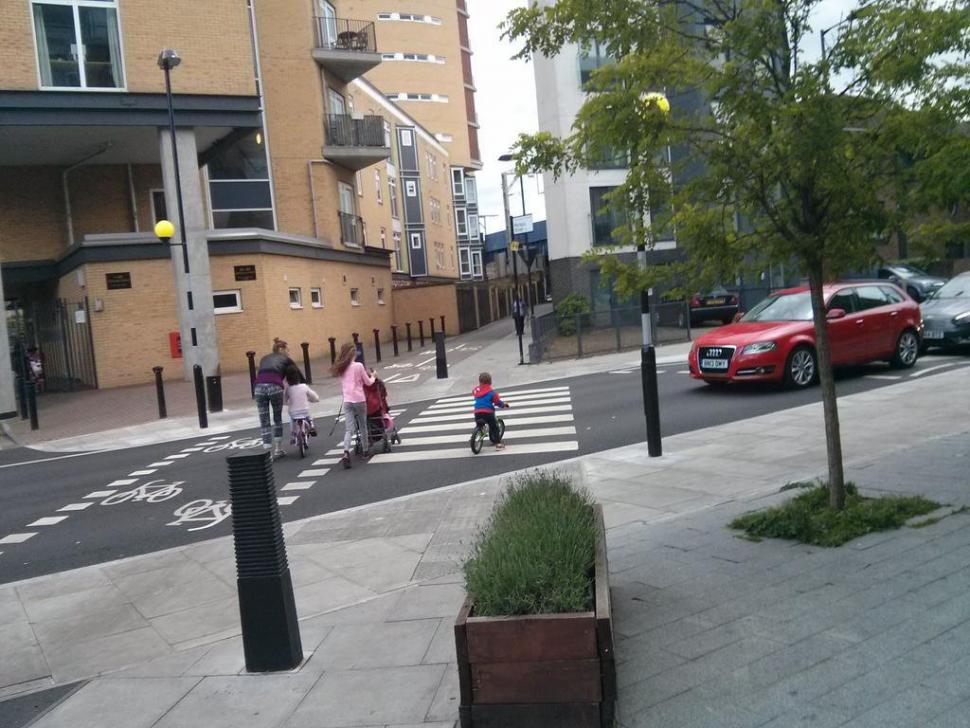 Changes to signs regulations - six years in the making - mean councils can legally introduce dual zebra crossings. This crossing was technically installed illegally by one frustrated council.
by Laura Laker

The Department of Transport (DfT) has made long-awaited changes to infrastructure regulations, meaning mandatory bike lanes and low level traffic lights can now be used without a special application to central government, while parallel pedestrian-and-cycle zebras can be legally introduced for the first time, making Dutch-style roundabouts possible in the UK.

Changes to the TSRGD (Traffic Signs Regulations and General Directions), which take effect on 22 April, were finally approved six years after the signage review began. At least two councils, frustrated by lengthy delays, illegally introduced cycle-friendly infrastructure in the interim.

Phil Jones, of Phil Jones Associates, is a transport planner and traffic engineer who trains councils on cycle friendly infrastructure. He calls the changes “significant”, and says there is no reason, from the 22nd April, why every new bike lane shouldn’t  be mandatory, rather than advisory, giving cyclists legal protection against encroaching traffic, and says people should be asking for these improvements from their local councils.

Jones said: "Local authorities have been chomping at the bit to put in that style of [pedestrian and cycle] crossing even though it wasn’t lawful. Personally I think that is one of the most significant things because you can put them in for cheap and you can put them all the way around a roundabout - so you can have a Dutch style roundabout."

“In the past people have put in dashed (advisory) cycle lanes because it doesn’t need a special traffic order. Although it is just paint, a driver is legally committing an offence by entering a mandatory cycle lane, unless in a situation where a large vehicle has to cross the lane because of its size. As of the 22 April there is no reason now why all of the lanes going in shouldn’t be mandatory.”

Jones said: “Some of these things are tools that other countries have used for years. These are now part of the everyday tool bag that traffic engineers can use".

He said though the changes may take a while to reach council engineers, and whether or not the changes are used at local level depends on political will, it's also about councils having the confidence to use those tools.

“Campaigners need to be aware of this stuff now because there’s an inertia in the industry - it takes time to filter through,” he said. “People tend to do things the way they have always done, and if so campaigners need to ask [councils]: ‘why aren’t you considering this?’”

Jones and colleagues are producing a leaflet explaining how to use the new designs, ahead of changes to the DfT’s TSRGD document.

In the DfT’s release Transport Secretary, Patrick McLoughlin, focuses on the benefits to motorists of the changes, which also mean “unnecessary” road signs can be removed, including signs repeating the speed limit, after the number of road signs in the UK more than doubled from 1993 to an estimated 4.57m in 2013.

He said: “Road signs should only be installed on our roads when they are essential. Our common-sense reforms will help get rid of pointless signs that are an eyesore and distract drivers.

“These new rules will also save £30 million in taxpayers’ cash by 2020, leaving drivers with just the signs they need to travel safely.”