Off to London town to hang with some hipsters, and TR for the Charge Bikes 2011 Press Day, this is Charge's launch for the mainstream press and is somewhere between a sneak peek and a range launch, but with a free bar and pizza thrown in and minus the Powerpoint presentation on frame angles and tube profiles.

It was also probably supposed to be minus us, the main launch will be at Eurobike but there were was plenty to see here: new bikes, kit, and accessories, including the Hob, a new women specific version of the Plug, two new cyclo-cross bikes - works in progress with an all-round commuter flavour, plus the promise of a very interesting addition to the Mixer range featuring Shimano's hotly anticipated new Alfine 11-Speed hub.

As it turned out the evening was almost as interesting for what wasn't there as what was on display… almost.

It wasn't just about bikes and components, Charge's success has also spawned the Surface clothing brand and there were some interesting developments on show from them too… could 2011 be the year of the geography teacher elbow patch? Surface think it might. In the meantime they've got some natty looking new gloves to show off - the Oven Gloves.

First though, let's look at the bikes…

Charge are cooking with gas (sorry) when it comes to the Hob, this was the impact bike on display as you walked in, and it certainly was an attention grabber. The Hob's frame is a metallic red mixte affair with a split top tube that runs all the way down to the rear dropout making for a triple-triangulated frame that looks both pretty and purposeful. It's also a further statement of intent from Charge mastermind Nick Larsen who makes no secret of his desire to crack the women's cycling market. The Hob follows on from last year's launch of the Lazy Susan (expect to see a 700c version of that bike later this year) and the strong indication we get is that there will be plenty more women's bikes from Charge in the near future. 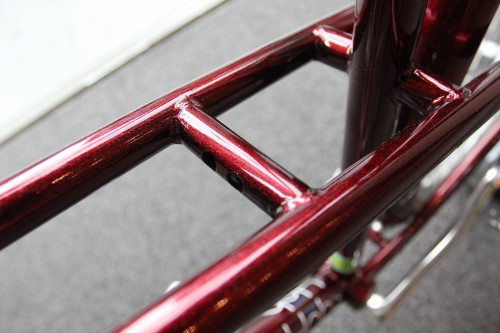 In the meantime the Hob delivers a female-oriented version of the Plug Grinder, with a combination of practicality those mudguards plus a dash of performance, there's also something of the Sink singlespeed about it with those swept back bars. The Hob's performance edge is underlined by the absence of a rack or indeed any rack mounting points – not sure that Charge aren't missing a trick here by at least offering the option for extra utility by having front and rear mounts. 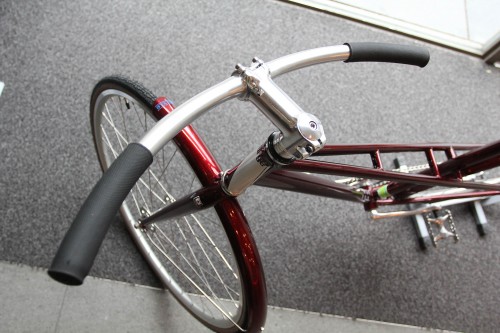 The rest of the Hob conforms to the tried and trusted Charge Plug formula: Tange cro-mo singlespeed frame matched up to a Whisk fork. Drivetrain is a 42T Sugino RD2 Messenger crankset, turning a choice of fixed for free 18T rear cogs using a Charge Masher chain. The male Plugs get a 16T rear cog so a slightly easier gear set up, but also it could be argued one that's a better all rounder, certainly a 42 – 18 set-up is going to be more liveable with for more riders in cities that aren't as flat as London.

Other spec highlights include: Tektro's R316 calliper brakes with stainless steel cable clips (for those who want a clean look to the frame if running fixed without a back brake), Charge's own Sweep bars, some elegant Wellgo alu flat pedals, and Charge's women specific Ladle saddle. 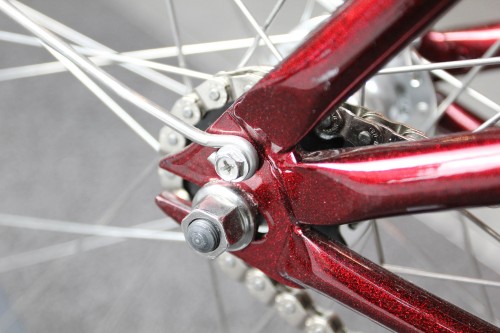 The wheels are Alex DM18 rims running on Charge large flange hubs and sporting Kenda Amberwall, gumwall tyres – a nice touch all Charge 2011 bikes will be running on gumwalls.

There will be three hop sizes at launch: XS, S, and Med, corresponding to 50, 53 and 56, word was that an XXS 47cm might at some point be available in the UK – Charge are big in Japan, where a lot of people are quite small and the XXS will be available there.

The hob will cost £629.99 and like the rest of the 2011 Plug range and all components and accessories wil hit the shops in October.