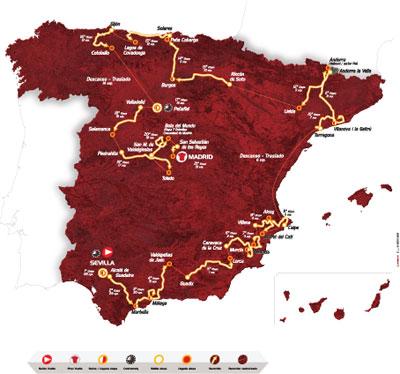 Vuelta Stage 1 reaction: Cavendish happy to be in red, but stresses he's here to win stages

Reaction from the leading teams, including what went wrong with Team Sky's challenge...
by Simon_MacMichael

Manx Missile Mark Cavendish will start today’s Stage 2 of the Vuelta a España in the race leader’s red jersey after leading his HTC-Columbia team over the line late last night in Seville as they set the fastest time in the 13km team time trial in the Andalusian city, but says it won’t distract him from his goal of notching up stage wins to consolidate his form ahead of October’s World Championships in Australia.

The British rider was quick to praise the contribution of the other eight members of the HTC-Columbia team that line up on the starting ramp outside the La Maestranza bull ring, however, saying: “My team-mates have impressed me so much that I wonder if we could have lost. After two turns, I was already killed. This is the first stage of my first Vuelta and I already have the red jersey but I only represent 10% of the win and each of my team-mate deserve to wear the jersey as well.”

The 25-year-old, who will follow leading the Great Britain team in the World Championship Road Race from Melbourne to Geelong by looking to win a Commonwealth Games gold medal for the Isle of Man in the same event in Delhi, added: “For me, to wear the jersey doesn’t change anything for stage 2 on Sunday because it should be a bunch sprint and we would have controlled the race anyway. It doesn’t take me away from my real goal here, which is to win stages.”

Italian outfit Liquigas-Doimo came closest to thwarting HTC-Columbia, but in the end finished 10 seconds down on the US-based team as the Czech rider Roman Kreuziger, one of two potential general classification riders in the team alongside the Sicilian Vncenzo Nibali, led them over the line.

Directeur Sportif Mario Scirea said afterwards: “We’ve put a strong performance, considering that the guys rode with a bit of fear because of not being used to race at night time. We have so many young guys here, they have ridden really well with Roman Kreuziger, Vincenzo Nibali and Daniele Bennati who have been the drivers of the team on the road. Bennati is looking good, so we’ll try and get a stage win in one of the first bunch sprints.”

Team Saxo Bank finished two seconds further back, with Fränk Schleck, aided by brother Andy, looking to exit the team – the pair are moving to the new Luxembourg-based outfit being set up by Brian Nygaard – with a maiden Grand Tour win. With the time taken for the team based on when the fifth rider crosses the line, the fact that Saxo Bank, whose line-up included World Time Trial Champion Fabian Cancellara appeared to be in some disarray at the end cost them vital seconds and a chance to pip Liquigas to the number-two spot.

The Denmark-based team's Directeur Sportif Bradley McGee commented: “Between km 8 and 9, we had a split in the team on a slightly false flat section. It was the hardest part of the course. Some guys were caught between turns. We lost the momentum. But everything else was spot on. It’s incredible. The guys were exiting the curves together. The only thing we missed was a specific high effort training but we accepted that. We got Fränk Schleck up in good position. We rode with no pressure until the warm-up on the home trainer. Right now it’s a successful day.”

Although there had been concerns about the impact of a floodlit nocturnal time trial on rider safety, in the end there were few problems, although one Garmin-Transitions rider did hit the deck, as Directeur Sportif Bingen Fernandez explains.

“Julian Dean crashed on a bike lane that was five centimetres higher than the road. He didn’t see it. It happened one hour before the race during our second lap of warm-up. He has a scratch on his shoulder and bruises on his right elbow and right side,” said Fernandez. “After one kilometre of racing, he was off, so we basically rode with one rider less and Julian is a very important guy in our team,” he continued.

“Otherwise, five or six guys rode really well,” adding, “David Zabriskie is strong at the moment.” However, Fernandez couldn’t hide his disappointment at the end of an evening on which Garmin-Transitions had been expected to challenge for the stage win. “The team time trial is our speciality,” he said. “We always want to win it. We were one of the favourites, so we can’t say we’re happy with sixth place but it’s not too bad either.”

Team Sky finished in a disappointing 14th place, which Team Principal Dave Brailsford explained was partly due to the team’s GC contender Thomas Löfkvist struggling to keep up with the early pace, meaning that Kjell Carlström had to fall back to support him, That, in turn, meant that the remaining riders out front had to ride harder than had been anticipated.

"They went off like a train and Thomas just got distanced a little bit on one of the chicanes. That meant he had to fight really hard to get back which put him into the red and it was hard going for him from then on," Brailsford told the Team Sky website.

He added: "Marcus [Ljungqvist one of Team Sky's Directeurs Sportiof] made the call to wait for Thomas - he did everything he could to get back on but it was tough for him.

"Once your rhythm has been disturbed it's hard to get it back but these things happen. It's not the result we were looking for but at least there's a reason behind it and they'd have been a lot higher up the leaderboard with a smoother run,” contined Brailsford.

"There are a lot of good legs in there - those front guys were flying - but these Grand Tour prologues continue to be pretty dramatic for us; we got the jersey at the Giro with Bradley (Wiggins), we then had the rain at the Tour de France and now this," he concluded.

Today’s Stage 2 takes the riders 173.7km from Alcalá de Guadaíra to Marbella and while some are predicting a stage finish, although not until after the riders have had a bit of a lie-in, with a later-than-usual start of 1230 UK time, and it’s also a day when, given the stage profile, a breakaway has every chance of succeeding.

The route runs through the provinces of Seville, Cadiz and Malaga to finish in Marbella and includes the first mountains points of the race, with two Category 3 climbs, followed by a fast descent in the final 50km to Marbella, with a vertical drop of 740m.