Bath & North East Somerset Council is to launch a close pass awareness campaign in partnership with Avon & Somerset Police. A "highly visible display on a bus" will be used to advise motorists of the need to give cyclists space when overtaking.

In January, Avon and Somerset Police announced that it would be running a close pass operation similar to that pioneered by West Midlands Police.

It has since said that off duty police officers will carry cameras while out cycling and that the footage could be used to prosecute.

As part of the operation, the force has carried out close-pass crackdowns on ‘hotspot roads’ which often see near-misses – albeit one of them had to be aborted as gridlock meant the cyclists were the ones passing cars. 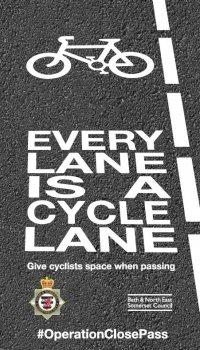 Over the last five years there has reportedly been a reduction in the number of people injured in road traffic collisions across Bath and North East Somerset. However, the number of cyclist casualties has remained relatively consistent over the period.

Councillor Mark Shelford (Conservative, Lyncombe) Cabinet Member for Transport, said: “As a cyclist I all too often witness drivers not giving cyclists the time or space necessary to complete their journeys in a safe manner.

“Drivers should give cyclists at least the same amount of space as vehicles when overtaking, which is 1.5 metres or approximately a car door width. We want to encourage people to use sustainable forms of transport, such as cycling, but cycling on our roads needs to be safe and all road users need to work together to achieve this.”

Chief Inspector Kevan Rowlands, Head of Road Safety at Avon and Somerset Police said: “Since the beginning of 2017 we’ve received more than 350 reports of near misses, which suggests that people aren’t aware of how much space they should leave when overtaking, or perhaps choose to ignore this advice. Anyone failing to leave enough space puts cyclists at risk and could be prosecuted for driving without due care and attention.”