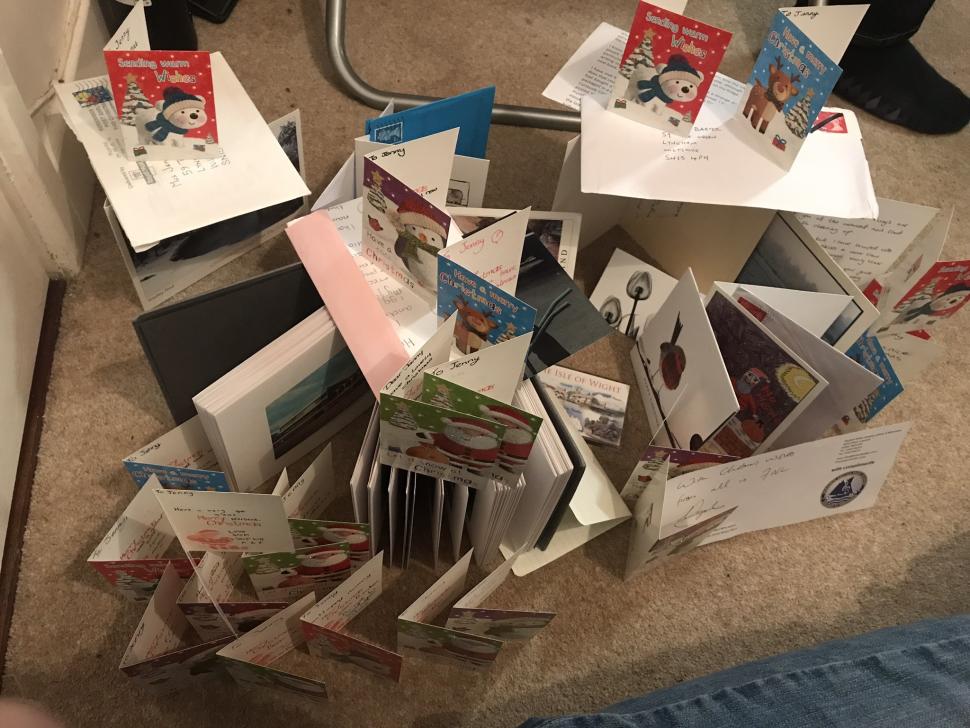 Cyclist asks bikepacking community to show support for his mother, who has cancer - and response is overwhelming

Dave Barter asked fellow riders to write to his mum, and they did in droves ... now he's asking you to do likewise...
by Simon_MacMichael

A Wiltshire cyclist who asked fellow members of an online bikepacking forum to show their support for his mother, who has battled cancer for more than 20 years says the response has been “overwhelming” – and is calling on more people, including road.cc readers, to write to her.

Dave Barter’s mother Jenny initially fought and conquered ovarian cancer, but was then diagnosed with bowel cancer with tumours subsequently discovered elsewhere in her body, including her lungs.

Before Christmas, in a post to the Bear Bones Bikepacking Forum, he wrote:

I rode over to see my parents tonight as I do all the time. My Mum is now permanently disabled caused by cancer that found its way into her spine. The knock-on effect was nerve damage that has now rendered her legs useless and she’s chair-bound and relies on carers. To compound things her latest scan shows lung tumours that are growing, not rapidly but they are not going away.

Now my Mum is a very hardy and generally positive woman who has fought cancer for nigh on 20 years but tonight understandably she was not as chirpy as usual. So I am on a mission to cheer her up and if you have ten minutes you can help. It would be great if she could get some random postcards or letters from complete strangers saying ‘Hi’.

I have no idea what would come after ‘Hi’ but I don’t think an essay in sympathy is her kind of thing. Maybe something along the lines of ... ‘Dave told us you could do with cheering up so here’s a picture of me with a ferret’.

Even if only one person did it, I think it would give her a few minutes break from my slightly insane Dad who she has to share a room with all day long. Think me in 20 years’ time.

Anyway I’d thought I’d ask. If anyone’s up for it. Drop me a PM and I’ll give you her address.

“I’d hoped one, maybe two would respond and the odd letter would drop through Mum’s door, maybe with a picture of a ferret,” he recounted in a post on his own blog.

“The response was overwhelming.

“It started with some beautiful flowers sent anonymously. Then a card arrived with a picture of myself semi-naked on the front, a memory of a trip to France the year before. A letter was next from Pete who described his last ride in Wales and another sent a box of chocolate sprouts.

“Mum loved every one. I received texts daily telling me of the offerings that had arrived. A hand designed Christmas card, a postcard from a 13-year-old who bikepacks with his Mum, a calendar of firemen (mostly undressed), fridge magnets and a letter from Becky with picture of her dog.”

He continued: “Mum’s heart nearly exploded when Nigel sat down with his class of schoolchildren and each sent her an individual Christmas card with a fact relevant to the festivities. One child poignantly wrote inside ‘Don’t worry Jenny, you are not alone’.

“Every single gesture took Mum away from this horrible disease for a few minutes whilst offering a brief sense of solidarity. Today’s text told me of a game of pocket Scrabble from Karl and Cat. They’d decide to send her every letter and try to improve her son’s vocabulary at the same time.

“I saw Mum the night before last and saw her face as she told me of each communication. There was no facade this time, the bikepackers had pushed aside the suffering and delivered some genuine warmth into Mum’s life. And not one of them had ever met her.”

Having received such a huge response to his appeal from mountain bikers, Dave got in touch with road.cc earlier this week to ask if we could help spread the word among road cyclists, which of course we are more than happy to do.

As he wrote on his blog: “It would be great for the letters to continue, a stamp and a few words are all it needs. The cheerier the better but be advised that she’s seen enough dodgy photos of me.

“My email is dave [at] phased.co.uk, (@citizenfishy on twitter), drop me a line and I’ll give you Mum’s address. This is your opportunity to be ‘medicine’ … something that nobody has offered you before,” he added.