Looking for a road bike that'll help you on the hills? The choice is getting wider and wider.....
by dave atkinson

We were out at the Eurobike show at the start of the month. It's the world's biggest bike show and there's masses to see, so much so that we're still working through it all even now. For this week's five cool things we'll be turning our attention to the world of e-road.

e-Road is one of the most talked-about sectors of the bike market right now, with lots of companies launching assisted road bikes. Every year there's a type of bike that you need to have on your stand: it's been fixies, fat bikes, road disc bikes and gravel bikes in the past, and this year a lot of the buzz was around e-road. And Bafang, who make an awful lot of motors for an awful lot of e-bikes, have decided they want a piece of that action. The M800 system is the result. It’s a small-format mid motor that kicks out 200W; that’s less than the bigger motors but still a useful shove on the hills. The lower power means lower weight, and the motor weighs in at 2.3kg with the full M800 system – including the 200Wh battery and the display and remote switch – adding a total of 4.4kg to your bike. 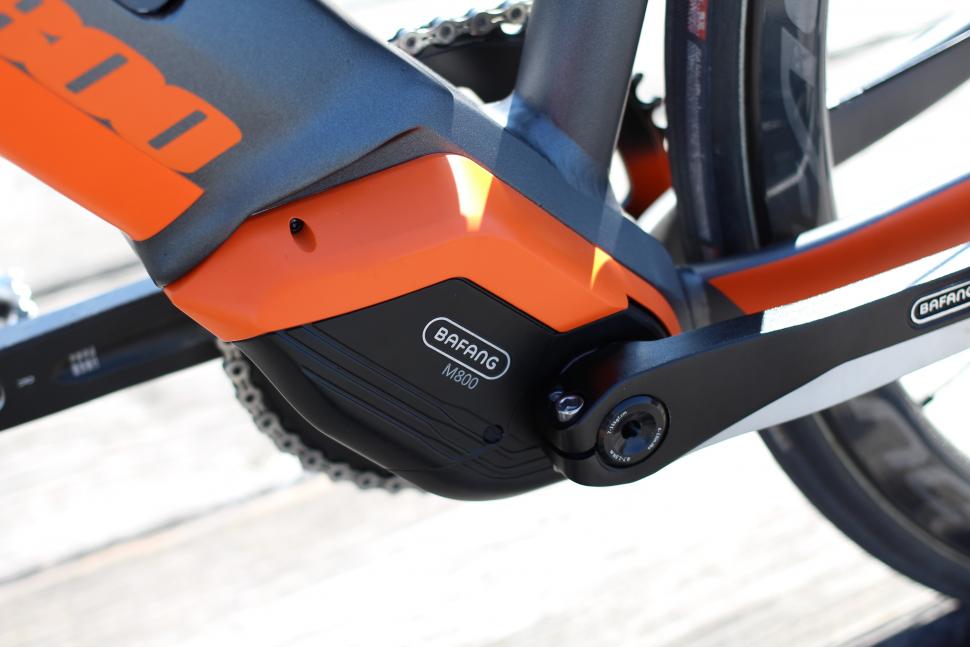 The ride experience is good: we took the test bike for a quick spin around the roads and paths outside the show and it’s a smooth, quiet motor that has plenty of assistance available. Here’s Dave talking about the new motor…

Carrying on around the halls, have a look at this. It’s the new carbon-framed Bianchi Aria e-Road. 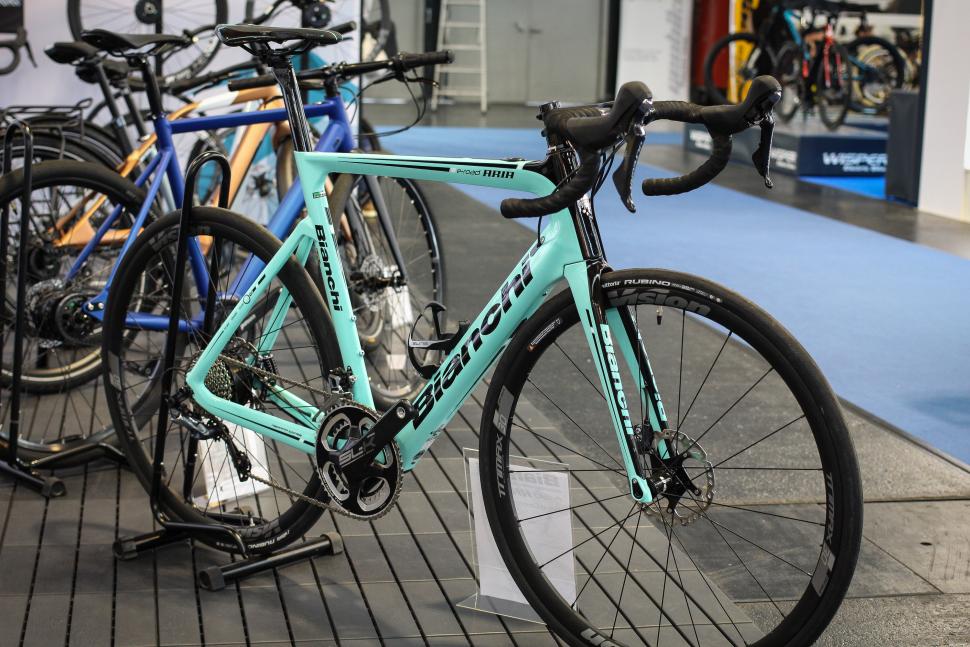 Bianchi didn’t have a stand at the show – the bike was on the ebikemotion stand, who are the motor supplier. This Bianchi is using the same X35 motor system as the Orbea Gain (which ebiketips recently reviewed) and the Wilier Cento Hybrid. 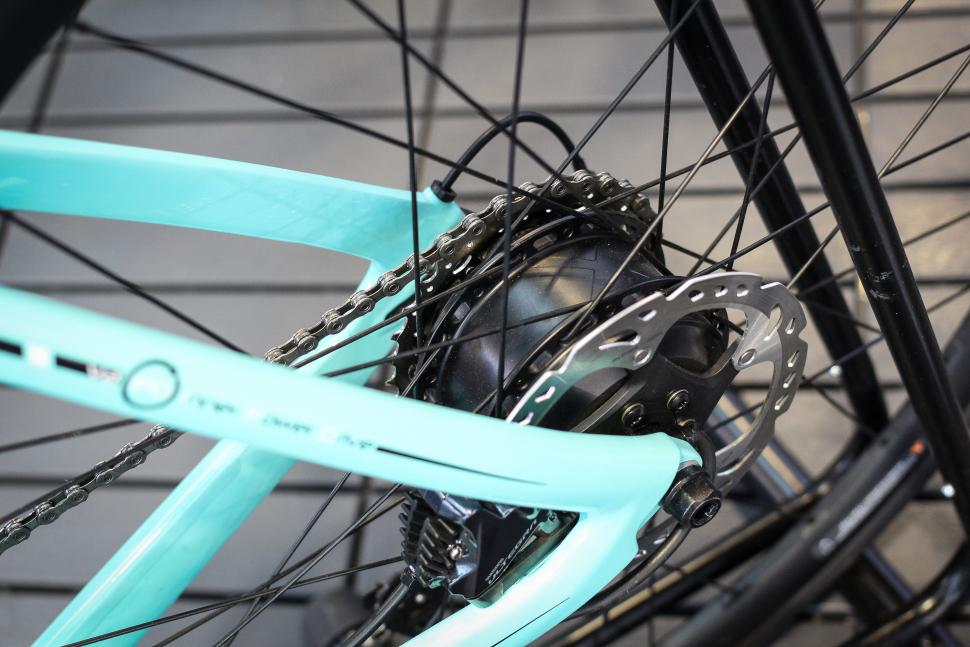 The integration of the ebikemotion system is about as neat as any out there at the moment. The rear hub motor sits inconspicuously between the cassette and disc rotor, and the battery is hidden inside the down tube. 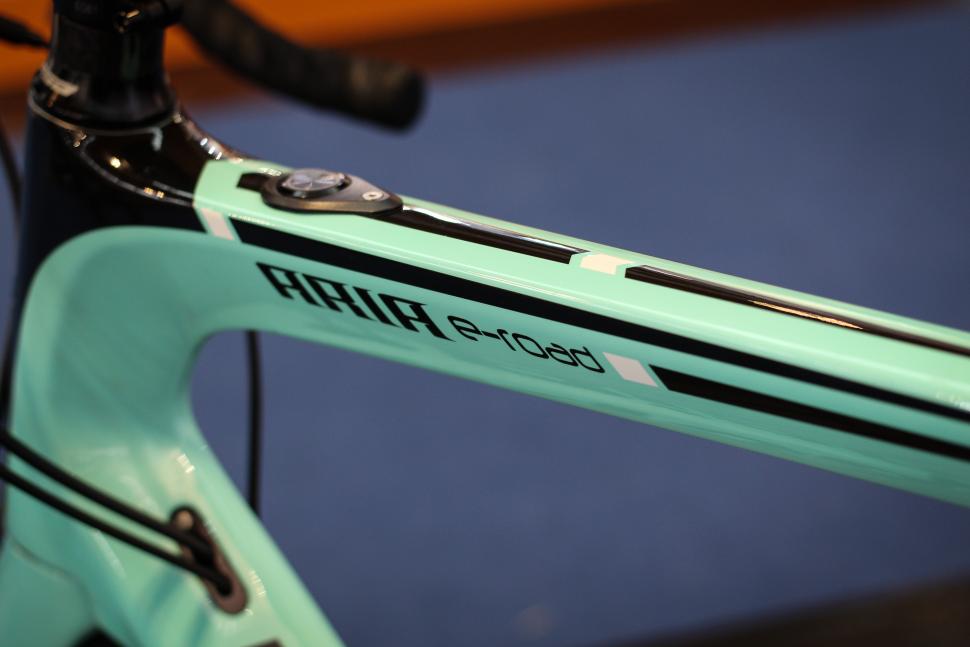 The only real giveaway is the control button on the front of the top tube. But it’s be easy to miss the whole system. The bike has a claimed weight of 11.7kg, which is feasible given the carbon frame and the fact that the motor system weighs only 3.5kg. The info panel suggests this is a concept bike, but it’s not: these are already in production. CKT is a company that’s gone down the route of developing its own motor system rather than buying something off the shelf. Its motor sits in the down tube of the bike, and drives the bottom bracket, but unlike the Vivax system which acts in a similar way the CKT bike has a gearbox between motor and axle which allows the motor to fully disengage. 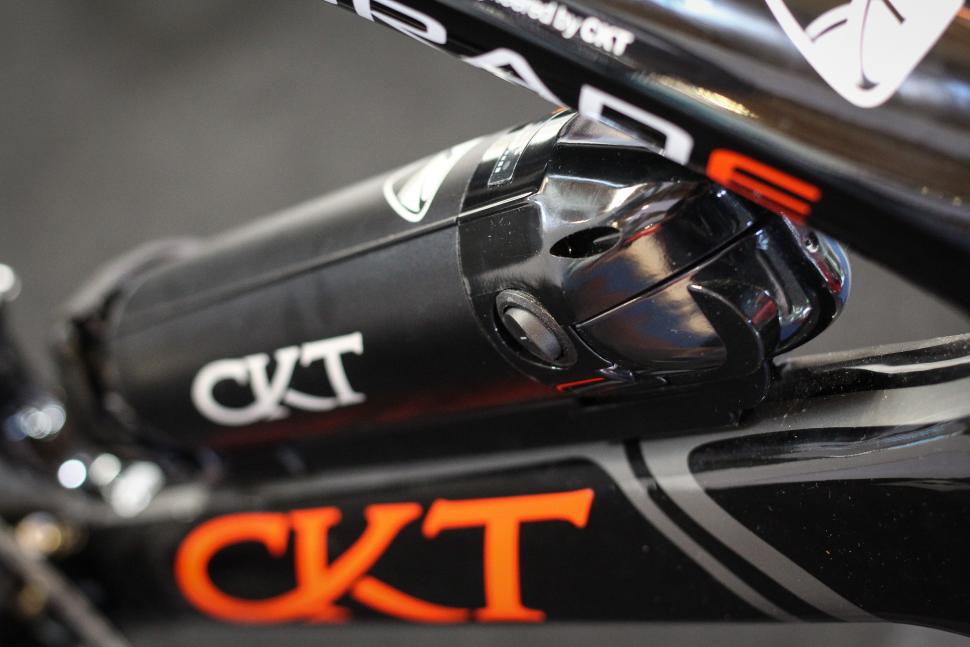 The bike uses a bottle-style battery that CKT claims will give the bike, which weighs between 13 and 14kg, a range of 80-120km. That’s presumably with fairly limited use of the motor along the way. 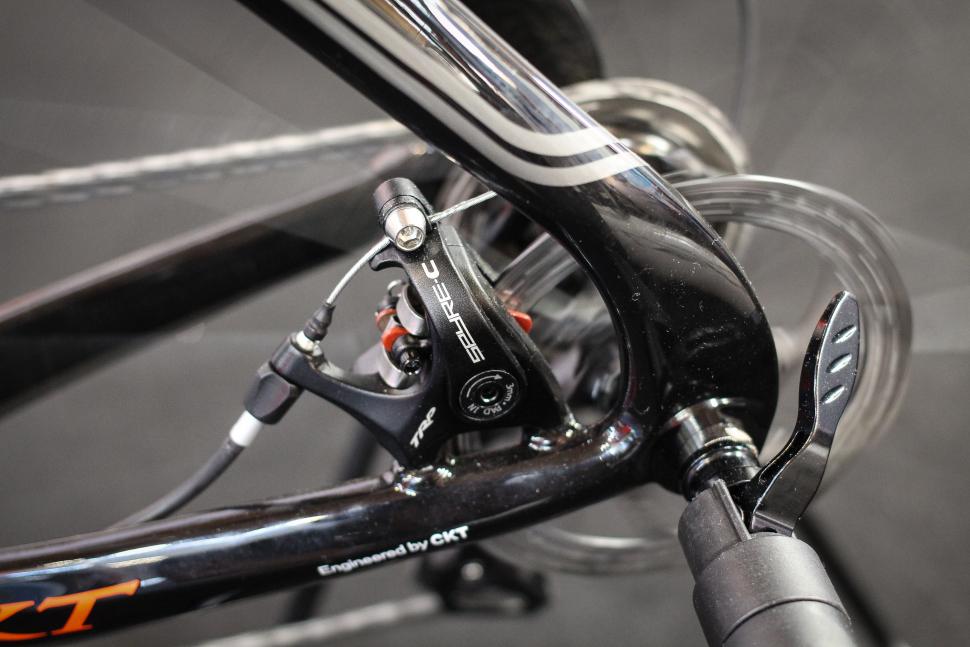 CKT’s full carbon bike is running a Shimano Ultegra mechanical transmission, and cable-actuated TRP Spyre discs. The price for the full bike is €5,900. 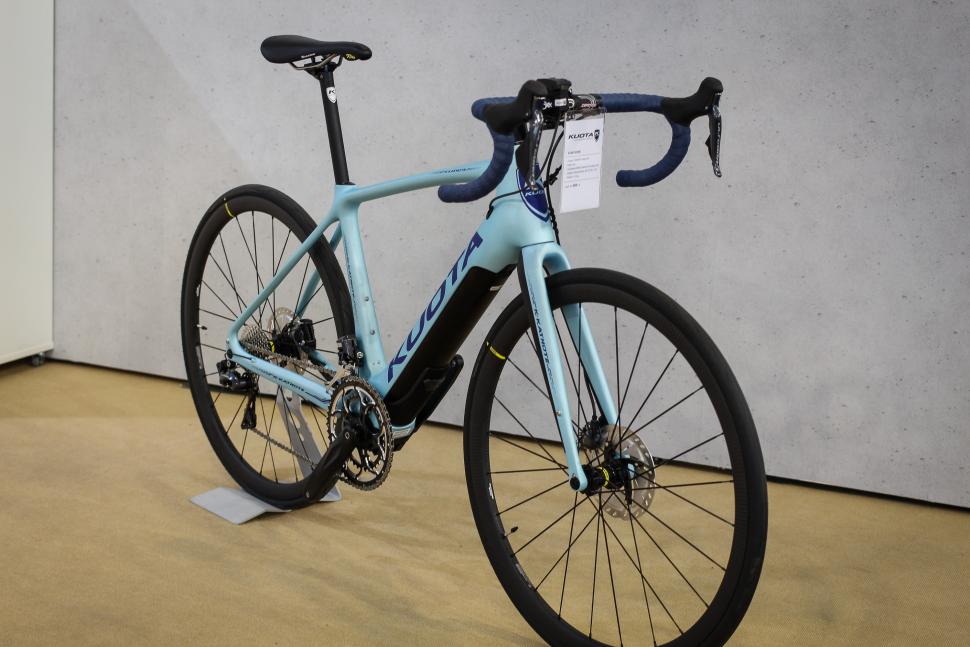 Kuota is getting its foot on the e-Road bandwagon with the K-Kathode. The most popular road bike motor at the moment seems to be the Fazua Evation system, and that’s what Kuota has gone with here. 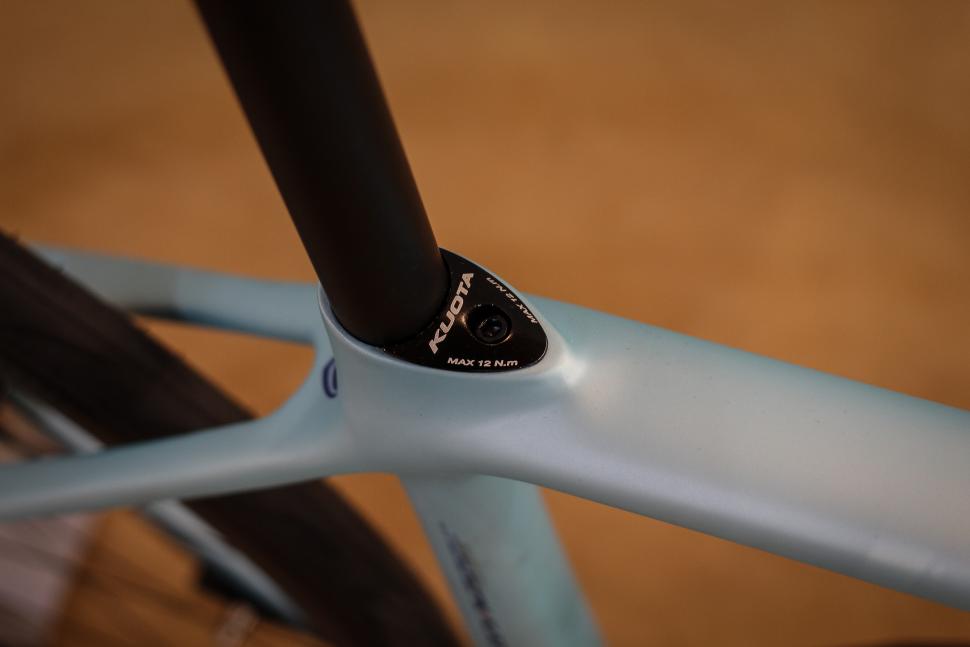 This is a high-spec build,  and that’s reflected in the €6,599 ticket price. The bike gets a full Shimano Ultegra Di2 drivetrain and Ksyrium Pro Carbon UST wheels. The frame looks like it might be based on Kuota’s K-Allroad gravel bike; there’s plenty of clearance for bigger tyres. One of the unique selling points of the Fazua system is that you can remove both the motor and the battery, leaving just a low-friction gearbox bottom bracket in place. That means you can ride the bike unpowered and the weight penalty is only around 1kg. 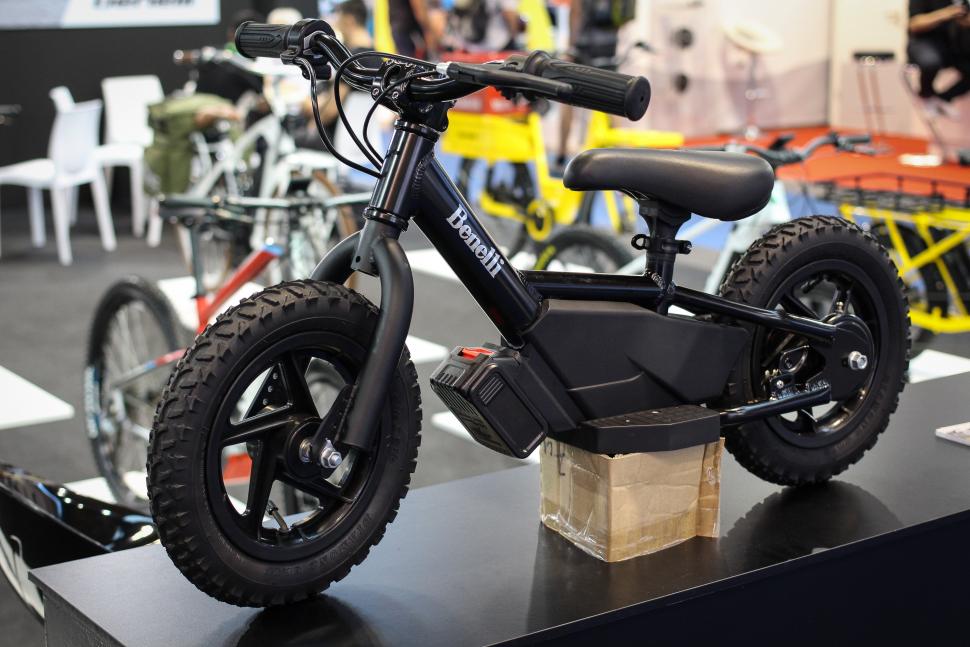 Not specifically e-road, but what if your toddler sees you on your e-road bike and wants to emulate mummy or daddy? Not to worry, Benelli has the answer in the form of this e-balance bike. Yes: this is a real thing. Although we suspect they only made it for a laugh. 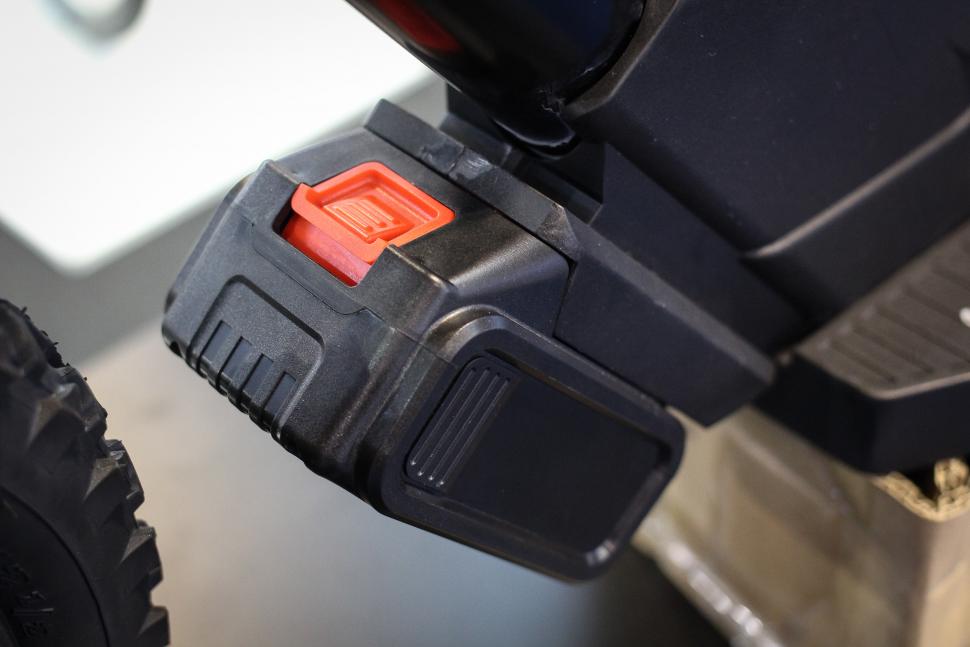 The e-balance bike is powered by what looks like a power tool battery. That won’t give it a massive range, but really: how far do you expect your two-year-old to be going? There’s a motor somewhere in the middle, sensibly it’s fully enclosed so little johnny doesn’t stick his fingers in the chain.

That’s all for this round-up! Stay tuned for more...