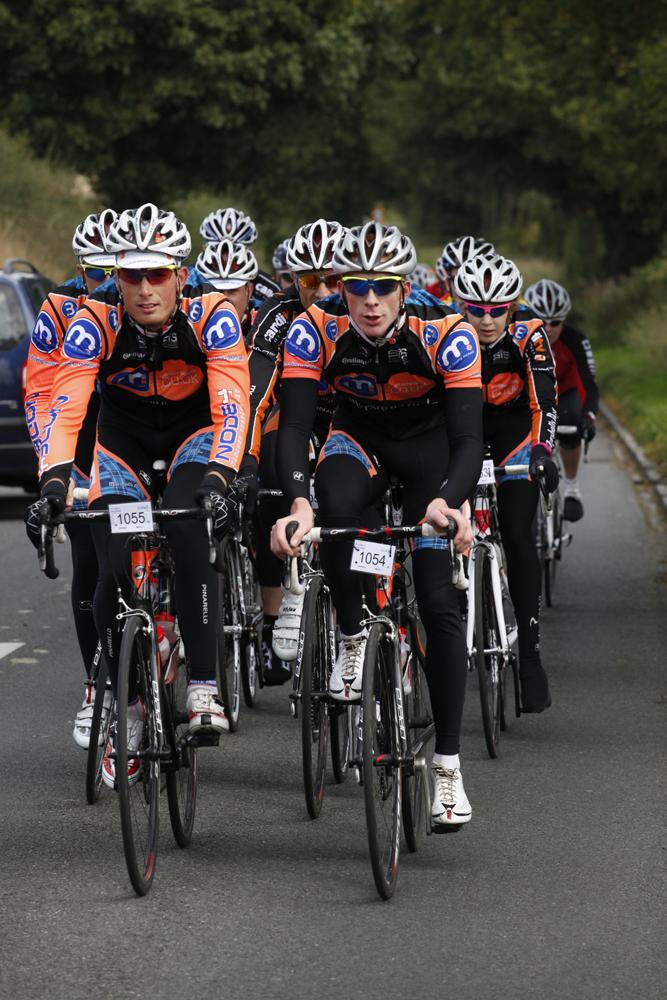 It may be over a week since this year’s Tour of Britain finished, but some of the stars of the race were back in the saddle yesterday to ride part of the route with 1,800 other keen cyclists - including five lucky road.cc users who won places on the ride through our Schwag Grab last week.

The occasion was the third and final Prostate Cancer Charity Tour Ride which followed the itinerary of Stage 2 of this year’s race, starting and finishing in Stoke-on-Trent, with pros taking part including Ed Clancy and his Motorpoint-Marshalls Pasta team mates and Kristian House with colleagues from Rapha-Condor-Sharp.

Clancy and his team mates, including the evergreen Malcolm Elliott, rode the 80km sportive route, and afterwards the Olympic gold medallist said: “I enjoyed it. It was a good day - and nice to see my teammates on a day when we are not competing, in a stress free environment.

“The number of cycling fans has really grown in the past few years, largely following the success we have had at the Olympics and in the Tour de France. You could see on the Tour of Britain stages, a few weeks ago, there were a lot of spectators out on the route especially to watch the bike ride.

“The Tour Ride is a great opportunity for people to be able to actually ride the same route themselves and challenge themselves against the pros. It was really well organised with food stops along the way, race cars and good signage. Prostate cancer is the most prevalent cancer in men in the UK, so it was also good to do this for a good cause and get the message out there,” Clancy added.

Riders were able to ride three separate distances, all using the Tour of Britain route – a family ride of between 1 and 25km, the 80km route Clancy and his team mates chose, and the full 161km itinerary used in the Tour of Britain itself, equivalent to 100 miles to mark this year’s centenary of the incorporation of the city of Stoke-on-Trent.

That stage had been billed in advance as possibly the toughest of this year’s race, including as it did the climb of Gun Hill, although foul weather on the following day’s Stage 3 in Wales, including the climb and descent of the Black Mountain plus the merciless Constitution Hill in Swansea, meant that accolade went to the Welsh stage.

“There was a really good atmosphere,” enthused House, a former Staffordshire resident, afterwards. “It is not often we get to ride when there is no pressure to compete or to ride with our sponsors. It was great to have Paul there too. One thing that really impressed us was the number of kids we saw riding. It is brilliant that the ride is open to families too. This is how we are going to see the sport grow, by getting children involved early.”

Molyneux, whose efforts in the United States helped race £80,000 for the charity, said of yesterday’s ride: “It was really well organised and we had great weather for it. I think The Prostate Cancer Charity Tour Rides will just grow. It is a great concept, allowing people to ride the same route as the pros. I will be back in 2011.”

“I did the London Ride for the Charity last year and decided to up the stakes this year with a tougher challenge, in Stoke-on-Trent,” said former Port Vale player Bright. “As a Stokie, and keen cyclist myself, it was a proposition I could not turn down. It was pretty impressive to see so many people, from all across the UK, at the start line. As well as enjoying a good day’s cycling, everyone taking part was also showing their commitment to getting the message out there about prostate cancer.

“I have been an Ambassador of the Charity for several years now. In particular, I am a supporter of their fantastic work to break down the taboos around the disease in the African Caribbean community, where men are three times more likely to develop the disease than white men.”

The three Tour Rides this year form part of the charity’s endeavour to get people to ‘Unite ByCycling’ to help raise awareness of prostate cancer, the most common cancer contracted by men in the UK.

Mark Bishop, Director of Fundraising at The Prostate Cancer Charity, commented: “It was great to see hundreds of people joining together on two wheels to Unite ByCycling and help to spread the word about prostate cancer. We were delighted to be joined by the professional riders. The event today was a huge success and we would like to congratulate all of our fantastic riders who took part and thank them for all of their hard work and determination.”

Hugh Roberts, CEO of The Tour of Britain added: “The Prostate Cancer Charity Tour Rides are a real testament to the success of our partnership, which is now in its second year. To see so many people, from professional riders to families at the event in Stoke-on-Trent, shows how the unique concept of the Tour Rides has caught the imagination of all cyclists.”

The five road.cc users who took part in the ride were Fasted, Flandrian, Alexlnumber1, Munded and Demoff, so don't be shy, let us know how you all got on!