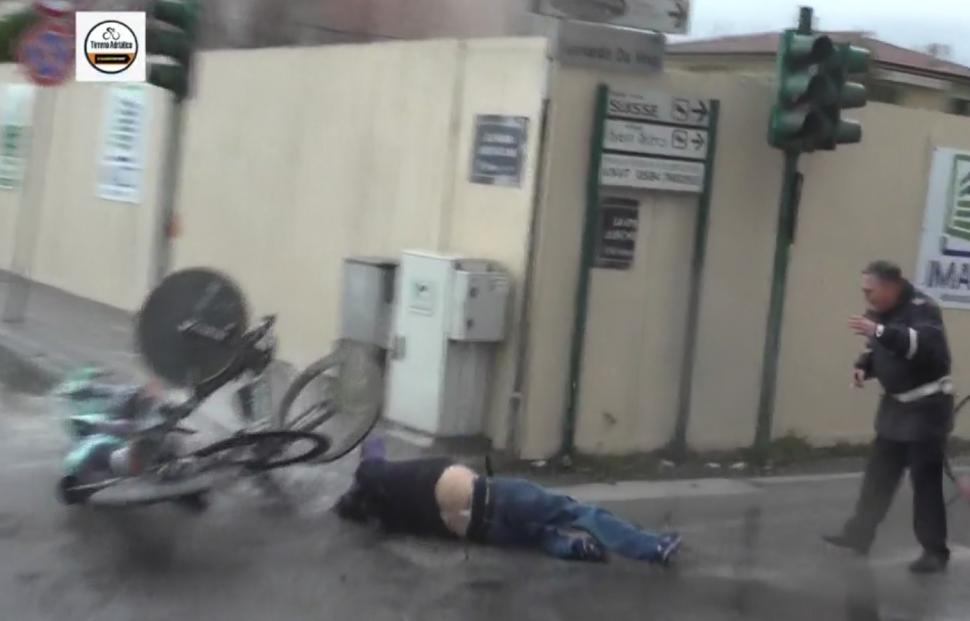 The riders would have been doing around 60kph!
by Liam Cahill

Sagan's Bora-Hansgrohe teammates Rafal Majka and Oscar Gatto were taken down by a pedestrian midway through the opening stage of Tirreno-Adriatico in Italy this afternoon.

Peter Sagan was also nearly involved but managed to keep his time trial bike upright on the wet roads in Lido di Camaiore.

The crash was caused when a pedestrian crossed the road in front of the Bora-Hansgrohe team as they rode the 21.5km team time trial.

With a flat course, the riders were travelling at some speed, probably close to 60 kilometres an hour when the man seemed to ignore the police officer who was stopping traffic at a junction.

Bora-Hansgrohe continued with the race with five riders, needing only four to register a time for the stage. Majka and Gatto finished several minutes behind with Majka looking the worst affected. Blood could be seen coming from his face and he may now be a doubt for the rest of the race.

It's not the first time that something like this has happened to a Bora-Hansgrohe rider at the Italian race.

Peter Sagan had to dig deep into his (rather big) box of skills to avoid a lady walking her dog during an individual time trial in the 2017 edition.

And let's not forget the time that Team Sky's wheels smashed to pieces. The crash left Gianni Moscon with some nasty road rash.

What is it about TT bikes and Tirreno?