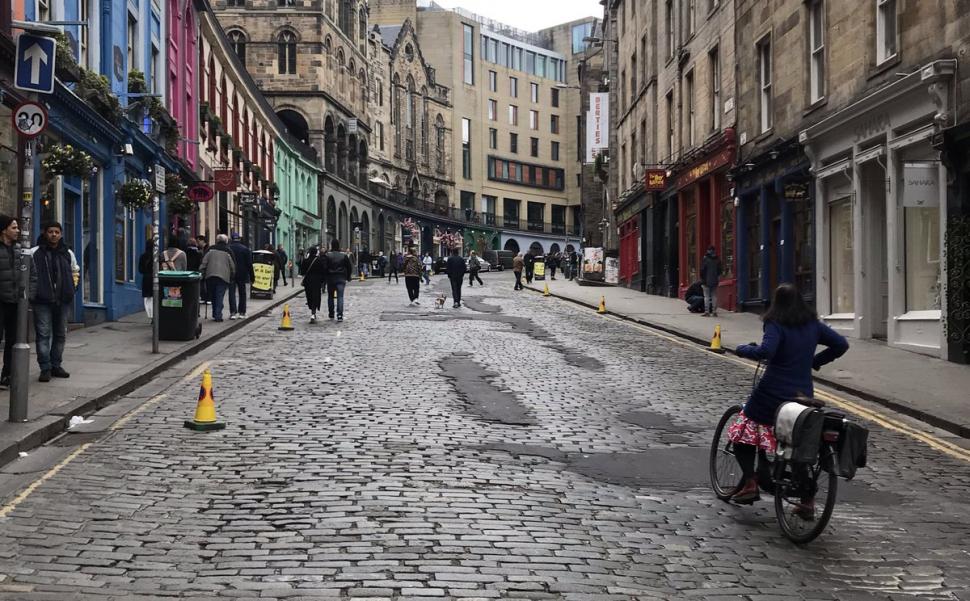 Victoria St (via City of Edinburgh Counccil on Twitter)

Scotland's capital is having an 18-month trial of car-free days on first Friday of each month...
by Simon_MacMichael

Streets in Edinburgh were given over to people on bikes and on foot as Scotland’s capital today became the first city in the UK to join the global Open Streets movement.

The city’s Old Town, a UNESCO World Heritage site, was closed to motor vehicles, enabling people to enjoy a traffic-free Canongate, Cockburn Street and Victoria Street, among other roads in the historic centre.

City of Edinburgh Council’s transport and environment committee gave the go-ahead in February, to an 18-month Open Streets initiative that will see a gradual building of closed streets on the first Sunday of each month in the Old Town.

The city’s transport and environment convener, councillor Lesley Macinnes, said: “I’m delighted that Edinburgh will very soon be joining cities around the world to reap the benefits of Open Streets.

“We’ve seen how successful similar schemes internationally have proved by encouraging active travel, improving air quality and creating a safer, more relaxed atmosphere so I can’t wait to see this take shape in the capital.

“Climate change is a real threat to society, it’s clear that we have to act, and Open Streets is undoubtedly a step in the right direction,” she added.

“Evidence is very clear that vehicle dominance of our urban environment is a major cause of air pollution.

“Closing streets to traffic does have a big and positive impact. As an example, last year’s London Marathon, which includes road closures across the city, coincided with an 89% drop in air pollution in central London,” she continued.

“Open Streets is a great initiative to make our city centres healthier, greener and safer places for everyone.”