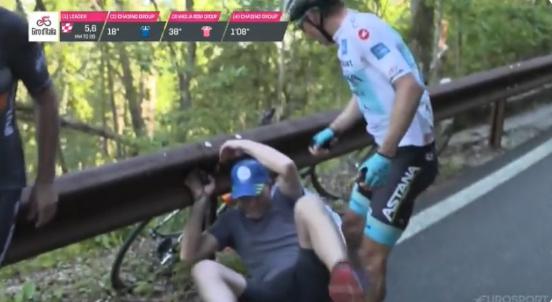 Italian newspaper Corriere dello Sport reports that the UCI is reviewing Miguel Ángel López’s altercation with a fan at the Giro d’Italia on the grounds that the race jury’s decision not to impose a penalty sets a precedent.

Lopez was shown on television striking a spectator several times. The man had inadvertently knocked him off his bike after colliding with another fan while running alongside the Colombian.

According to UCI rules, hitting a spectator draws a 500 to 2,000 Swiss franc fine, a deduction of 10 to 100 points from the rider’s UCI rankings and elimination or disqualification from the race.

Lopez escaped punishment and Cycling News has previously reported that the Giro d'Italia judges were called to UCI headquarters to explain the decision.

Astana boss Giuseppe Martinelli initially suggested that Lopez should have 'punished' the fan even more.

"I think it's normal that he reacted as he did. He was on the way to winning the stage… I'm only sorry that he didn't give the spectator some more punishment, he deserved it for what he did."

Martinelli later said that Lopez’s actions were “wrong” but seemingly only on the basis that he’d wasted time.

"He should have jumped back on his bike because he could have still won the stage,” he told La Gazzetta dello Sport. “Instead he started arguing with that guy and lost at least 30 seconds. That was a mistake.

"Despite his mistakes, it's clear something has to be done to better protect the riders. What? I don't know. But something got to be done."

Speaking after the stage, Lopez offered a qualified apology.

“I am sorry for my emotions, but in the rush of the race, especially, in the final of the queen stage it is hard to control it.

“It was a bad situation, but, anyway, I am very sad because of the bad security level of the riders during the race.

“It is a pity I lost my chances today because this incident happened, but, unfortunately, this kind of situations happen regular and this is not good. I’d like to see more respect to the riders, who are doing their best during a cycling race.”