Iconic Bristol bike shop and café Mud Dock has celebrated its 25th anniversary – but at the same time as it has been hit by a whopping 74 per cent rent rise from its landlord, the city council, something the business’s co-founder says has put it in “an invidious position.”

Bike shops combined with a café are commonplace these days – but not when Mud Dock opened on the south-western city’s Floating Harbour a quarter of a century ago, and we suspect it may have been the first such venue in the UK.

Its standalone site, around the corner from the Arnolfini Arts Centre, also makes it a local landmark.

First, the happier side of the story. Founded in 1994 by Beverly and Jerry Arron, Mud Dock threw a party last Friday to celebrate 25 years in business in which it has sold 12,000-plus bikes, as well as hosting guests including writer Will Self, fashion designer and cycling nut Paul Smith and, in a city which is a rugby union hotbed, the All Blacks team. 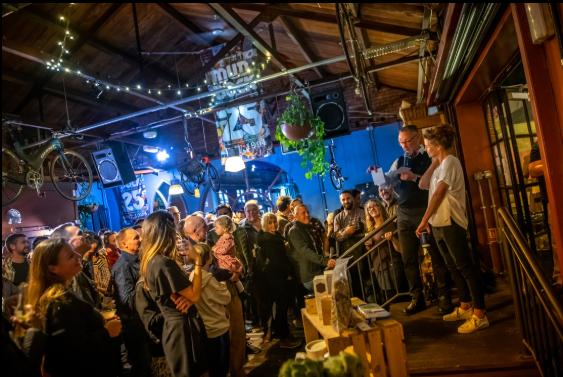 It now also has a bike shed, workshop and showering facility, developed in partnership with the council to cater for the city’s bike commuters, and is even licensed for weddings.

Looking back on the past quarter century, Beverly Arron said: “There have been glittering highs and brutal lows, but I’m so proud of what we’ve built, and the great friends we’ve made,

“I remember selling a cup of tea to our first customer, back in 1994, as though it were yesterday. It was so strange after months of paying contractors to finally have someone offering me money – I almost turned it down!

“Some of my favourite memories are of the Mud Dock race team turning up to races – usually late – in our Dodge Ram pick-up truck, plastered with Mud Dock logos and full of bikes and beer.

“It’s been thrilling to watch the cycling community in Bristol grow around us, and I can’t wait to see what’s next.”

On the same day the 25th anniversary bash took place, however, BBC News Bristol ran a story about a challenge facing the business as it enters its second quarter-century of trading – a massive rent increase, backdated to 2015, that has landed it with a bill in excess of £100,000.

The premises are leased from Bristol City Council, which says the rent is “regularly reviewed by an independent surveyor,” whom it insists “negotiates the new rent with the council and tenant.”

Jerry Arron told BBC News that rent review meetings, which take place every five years, had “usually been very amicable,” but at the latest one the council had put forward an increase of 73.6 per cent.

“We're a small independent business. It puts us in a very invidious position.

“What we're adding to the city is something more than a fiscal transaction. We do bring quite a lot to the city.

“The rent is being assessed on a restaurant use on the ground floor, but it has only ever been used as a retail space” – something that is abundantly clear to anyone who has visited Mud Dock over the past 25 years.

In a statement, the council told BBC News: “If no agreement can be negotiated then the Royal Institution of Chartered Surveyors appoints an expert or arbitrator to set the level of rent independently.”

That’s a standard feature of commercial property leases containing a five-year rent review clause (which in itself is often defined as “upwards only” – ie the rent will go up, but never down – but one that tenants may be reluctant to invoke due to a combination of the cost of legal and other specialist advice, plus the effect it may have on their future relationship with the landlord.