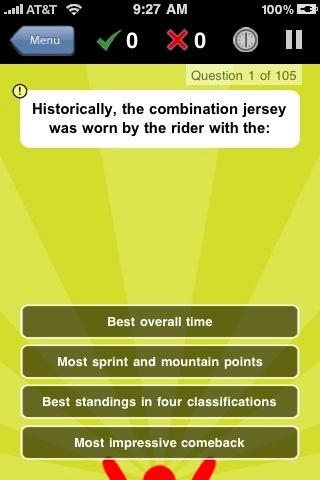 Own an iPhone? App lets you test yourself on the Tour de France

More than 100 questions to quiz your knowledge of cycling's biggest race...
by Simon_MacMichael

Summer may seem a long way off with Britain currently swathed under a blanket of snow, but if you have an Apple iPhone, there’s an app that allows you to you’re your Tour de France knowledge wherever you are, whether that be waiting for your flight to sunnier climes to leave Heathrow, or snowbound at home meaning you can’t get over to the in-laws.

According to its developers, “The KnowPro Tour de France quiz is based on the history, facts, racers and personalities of the biggest bicycle race in the world. With more than 100 questions covering topics ranging from the Tour’s inception over 100 years ago to contemporary riders, this app will help you appreciate and enjoy the annual three-week spectacle that is the Tour de France.

We imagine the answer to the latter question is the replacement of trade teams with national ones, although you could certainly argue that to French villagers who line the route, the publicity caravan, which made its first appearance the same year, has had more impact than who the riders are racing for.

The app has been developed by KnowPro, which is perhaps best known for its apps aimed at the US educational market, allowing students to revise for tests such as SATs, but which also produces a number of quizzes on less academic subjects.

From the screenshots we’ve seen, the graphical interface is pretty basic, the background colour of yellow being the main tie-in with the subject, although of course that gets around issues such as licensing logos from Tour organsisers ASO or images from photographers.

If you are a fan of bicycling racing or the Tour, you will love KnowPro’s Tour de France quiz! One reviewer on iTunes, who goes by the name GoEric, awards five stars and says: “This app is terrific! I could quiz myself anywhere! Quick way of reviewing and studying for my exams.”

We’re assuming he’s talking about another app made by KnowPro rather than the Tour de France one specifically, although if anyone does know where you can take a degree in Tour de France studies, we’d love to know.