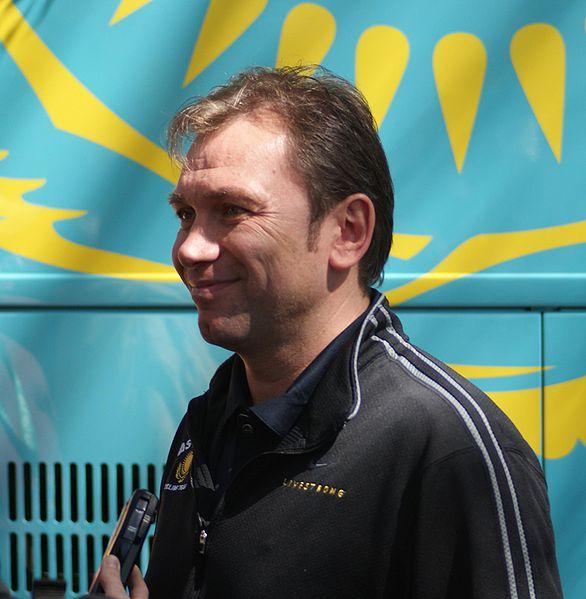 The Court of Arbitration for Sport (CAS) has rejected an appeal lodged by Team RadioShack manager Johan Bruyneel, against the timing of a two-month ban imposed on him last October by world cycling’s governing body, the UCI, following the team’s appearance at the start of the final stage of the Tour de France in unauthorised jerseys promoting Lance Armstrong’s Livestrong charity.

The start of the stage was delayed as millions of TV viewers around the world watched riders change back into official kit – handily stowed in the team cars – and fumble with safety pins as they changed their race numbers over, all the time gaining valuable exposure for the stunt, which swiftly became known as 'jerseygate.'

Once the stage was over, the team were back in the black jerseys, emblazoned with the number 28 to signify the number of millions of people affected by cancer worldwide to take to the Champs-Elysées podium after winning the team classification.

Dismissing the Belgian’s appeal against his ban, which will prevent him from carrying out his duties as team manager in February and March 2011, the CAS said in a statement published on its website that “Johan Bruyneel had appealed the timing of his suspension to the CAS asking for his ban to start on 1 January 2011 instead of 1 February 2011.”

Bruyneel's part in the affair also earned him a fine of 10,000 Swiss Francs for having "publicly insulted" UCI officials after he tweeted on the day, “Ok people! Now it's official! To be a race commisar, you don't need brains but only know the rules! Their motto: "c'est le reglement!" [It’s the rule].

The CAS added that it had “communicated its decision earlier today after an expedited arbitration procedure, and that “the award with reasons will be published in a few weeks.”

Yesterday evening, London-based Bruyneel had posted a message to his Twitter account saying “Just got some news I don't like but which makes me only more motivated. Time to break the pattern!”

Bringing the ban forward would have effectively commuted it to a month and a half, given that the season does not get going until the Tour Down Under on January 18, and would also have meant the ban would not have been in force during March, a month that sees some major races including Paris-Nice and Milan-Sanremo.

However, reacting to news of the failed appeal on his personal website, Bruyneel has revealed that his request to have the period of the ban changed was due to the fact that Quick Step rider Carlos Barredo, who also recieved a ban for an incident relating to the Tour de France when he had a post-stage punch-up with Rui Costa, has his suspension running from 1 January.

In a statement on his website, Bruyneel wrote: "After the 2010 Tour de France, I received notice from the UCI (International Cycling Union) that I would be disciplined for Team RadioShack wearing the Team 28 cancer fighting jerseys during the last stage of the Tour de France. On October 29th, I was given a suspension from the UCI for two (2) months, which would be effective February 1, 2011 and run through March 31, 2011.

"On the same day, Carlos Barredo, a professional rider from another team, also received a two (2) month suspension for an unrelated infraction which also happened during the 2010 Tour de France. I was surprised to see that Barredo's suspension would be effective January 1, 2011 and run through February 28, 2011.

"I was unclear why a professional sports governing body would assign two different suspension start dates, especially when the 2011 cycling season starts prior to February 1, 2011 (first World Tour event starts January 16). Only out of principle, I questioned the UCI on the reason my suspension started February 1 and not January 1 like Barredo's.

"When I didn't receive an answer, I filed an appeal with the Court of Arbitration for Sport (CAS). I was not appealing the suspension, but rather asking the ban to start on January 1 - the same start date as Barredo's. I received notice today that CAS has rejected my appeal and that the UCI's decision is maintained. The letter that I received from CAS also does not provide any justification on the ruling.

"As originally ruled by the UCI, I will now have to serve my suspension starting on February 1. To this day, I am still left wondering the reason the UCI has not acted in a uniformed and consistent manner using common sense. I will start the season as a sports director on January 16th in Australia at the Santos Tour Down Under, and after this event I will serve a 2 month suspension in February and March. My protest was solely out of principle as this is just one example of many where people in our sport are forced to accept arbitrary decisions."

The website includes a poll inviting visitors to choose which sanction, if any, the UCI should have applied in the case, and Bruyneel concludes:

"This particular one, like so many other things in our sport, really makes no sense to me at all, but it is what it is... Does it make sense to you???"