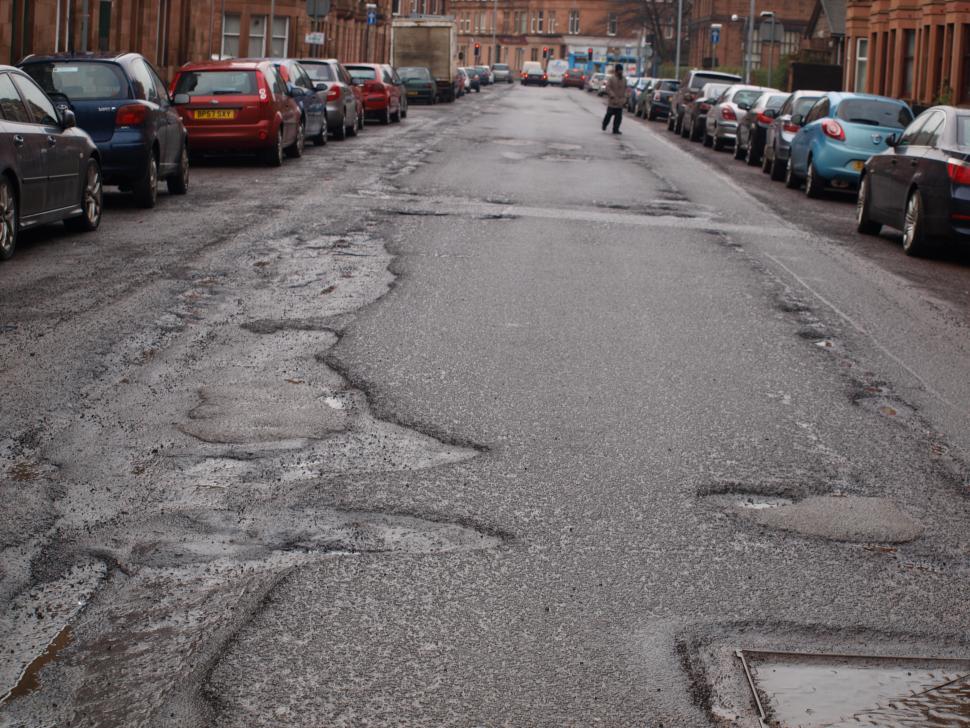 Over a third of nation's roads unacceptably poor...
by Mark Appleton

To anyone who cycles in Scotland it will come as no surprise to learn that, officially, over a third of the country’s roads are in sub-standard condition.

What might come as more of a shock, however, is the news that it would cost a staggering £2.25 billion to put them right – and that’s before the severe weather that took a heavy toll on road surfaces late last year.

Audit Scotland – the body charged with ensuring public money in Scotland is used properly – produced the figures in a report which calls for a major rethink of how Scotland’s road network is managed and maintained.

The organisation said: "Despite high levels of overall spending on public services, the condition of Scotland’s roads worsened over the past six years. In 2010, only 63% of roads were in an acceptable condition."

The cost of repairing the backlog now stands at £1 billion more than it did in 2004 and Auditor General for Scotland, Robert Black, added:

“Members of the public are increasingly dissatisfied with the condition of our roads. The pattern of spending and scale of backlog means that the value of these public assets is not being sustained.

"But by deferring essential expenditure on infrastructure, public bodies are storing up problems for the future and passing a greater burden onto generations to come.”

"We will fully consider the findings of the report which clearly highlights the challenges for both local authorities and the Scottish Government in maintaining road networks being used by increasing levels of traffic.”

"Maintaining the condition of our trunk road and motorway network is vital to the economy of Scotland and we will continue to carry out maintenance work on our trunk roads and motorways to ensure they are safe, despite the £1.3bn budget cut from Westminster.”

Glasgow City Council, meanwhile, told road.cc that they have recently tripled the budget for road maintenance from £4m to £12m. But even that sum appears to be hopelessly inadequate given the parlous state of the city’s road network, an alarming proportion of which represents a genuine danger to cyclists.

The council says that the context in which road maintenance is carried out includes 20,000 utility openings (gas, electricity etc) made in the city every year – which they say are often subject to a very poor quality of repair.

“Many of our roads have been developed from Victorian times and were never designed to accommodate vehicles of the size or weight we now see – or, for that matter, the sheer volume of traffic on today’s roads,” a spokesman told us. He also said there had been a lack of investment in roads on a national level over decades.

The spokesman continued: “After enduring three consecutive harsh winters - the latest the worst in 100 years - there has been a marked deterioration in the condition of the city’s road network and an explosion in the number of new potholes developing.

"The extremely low temperatures, snow, ice and rapid freeze/thaw cycles experienced over a prolonged period throughout December and early January have led to a more rapid deterioration than would normally be expected.

"A comparison of the number of potholes being reported annually demonstrates that we are dealing with 73% more new potholes than we were in 2008/09."

As an indication of the deteriorating situation in the city, the number of potholes reported January to January in recent years isas follows:-

The spokesman continued: “In addition, we are increasingly finding that many of these reports are not a simple, single pothole but a whole series of potholes or a larger damaged area which requires to be surfaced.

“Clearly, this is extremely challenging. However, additional investment made in the network (£12m in the current financial year) had helped, prior to the winter."

Glasgow City Council says it is difficult for them to make long term plans for road maintenance as they currently receive only a one-year budget from the Scottish Government and therefore cannot predict future levels of funding.

So while the Scottish Government appears to be implicating Westminster in the shambolic state of Scotland's roads, the country's largest local authority says it cannot plan road maintenance for the longer term due to Holyrood's inability to offer guarantees about future funding.

The advice for cyclists in urban areas of Scotland in particular, therefore, appears to be: don't expect an overall improvement in the state of the roads any time soon, continue to watch very carefully where you are going and pray that a pothole-swerving motorist doesn't wipe you out.