It is one of the most shocking injuries seen on a cycling track in recent years.  But in this video  shot by British Cycling just hours after removing a substantial piece of wood from Malaysian track cyclist Azizulhasni Awang's leg, a surgeon offered a reassuring prognosis.

Awang suffered the freak injury in the keirin final at the World Cup in Manchester on Saturday but both he and his coach were unaware there was a nine inch long shard of track embedded in his calf when he was put back on his bike following the crash. The Malaysian completed the event after the pile up which brought down virtually the entire field apart from Sir Chris Hoy who crossed the line to claim victory unopposed.

And while the crowd was in a state of frenzy celebrating Hoy’s win, Awang was literally collapsing into the arms of photographer Tony Colllins at the side of the track. Tony spoke exclusively to road.cc about those moments when he had no choice but to put down his camera and assist the stricken rider. Read his account about what happened below.

Awang was promoted to the bronze medal position after the Spanish rider Juan Peralta Gascon who crossed the line in third spot was demoted to last place. Further good news has come from the operating surgeon at Manchester Royal Infirmary who said the Malaysian, nicknamed the Pocket Rocket, should be able to get back on his bike in a fortnight. Awang will, however, miss the World Championships in Apeldoorn, Holland next month

Road.cc joins the rest of the cycling community in wishing him a speedy recovery.

Photographer Tony Collins writes: “I always feel a bit uneasy when I see press photos of suffering when some revolution or conflict is in the news, and wonder how the photographers can carry on snapping and whether they ever put down their camera for a second to comfort a child.

Okay, so track racing isn’t a war zone and none of its photographers have been victims of friendly fire, but I don’t think any fan of the keirin could deny that the possibility that something could kick off adds a bit of a guilty frisson to the proceedings.

So the scene is set for the final of the men’s keirin at the Manchester finale of this year’s World Cup competition. In the line-up is Sir Chris Hoy, Olympic champion and proverbial 600lb primate of the track and Awang, diminutive Malaysian and leader of the series so far.

We are in for a treat. The winding up circuits behind the derny are over and I am set up inside turn one with my camera ready waiting to get a shot of the bunch scrapping for position on the bell lap. They whizz past with Hoy leading and job done I turn to the big screen to enjoy the spectacle of the last 200 metres, a storming victory for Sir Chris with carnage behind as the whole field tumbles off and slides along the track in his wake.

The aftermath looks like a farce as the fallen scramble up and try to waddle to the line to claim their points toward the overall standings. Awang has somehow been put back on his bike and comes to a halt hanging on the rail just past me and I turn to get a shot of his skinsuit shredded from shoulder to thigh.

It’s pandemonium in the hall as everyone cheers Chris and all eyes are glued to the replays of the crash on the screen. Above the noise Wang is screaming his head off and I go over. No-one else is paying much attention but he is obviously in agony and points at his foot.

He is strapped to the bike and I lean over to hold stem and seatpost until some help arrives. No-one comes. It seems like an age and I start shouting “Medic, Medic” as loud as I can. No-one comes. A few distant photographers raise their lens for a shot and turn away. Eventually one of Awang’s crew arrives, unstraps him and lifts him off. He is still screaming and now I can see why: a nine inch spike of track planking has gone clean through his calf and is sticking out on either side. 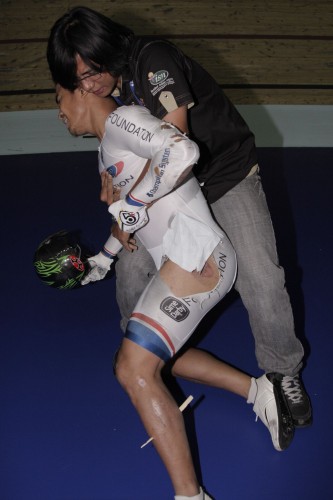 Now that he has someone else helping him I have to get a picture of this. There is no blood or gore and I don’t feel revulsion at the sight. It’s almost unreal. All of the other photographers are elsewhere as Hoy is being mobbed.

I feel a bit guilty; this guy is suffering. A stretcher trolley arrives and the other photographers on the trackside realise that something is up and the pack descends until one of the track medics tells them to back off. They stand back but continue shooting. I’m done though.

Respect to Awang and the other Keirin maniacs - they are the toughest. I hope he gets well soon and is quickly back on the boards. Will he frame that splinter and hang it on the wall I wonder? [In fact the hospital destroyed it as it was covered in blood etc].

Do you need to be different to be a photographer though? A bit detached? Lacking in empathy? I hope I did my best for him, but in the end I got the shot."