British track rider Dave Daniell is heading out to Japan to race on the Keirin circuit between April and September, and London/web-based bike shop Tokyo Fixed have supplied him with the bikes he’ll be using to compete.

Daniell is a hopeful for the GB 2012 Olympic track team with several World Cup podiums to his name and a silver medal from the keirin in last year’s Commonwealth Games.

Max Lewis of Tokyo Fixed said, “A few weeks back, Dave contacted us. He was seeking advice on the NJS [Nihon Jitensha Shinkōkai – the Japanese Keirin Association] kit he had been instructed to use. Dave was also after an NJS-approved track frame.

“From the list of seven top frame builders, two are available from Tokyo Fixed but between Cherubim and Nagasawa, the obvious choice for Dave was the latter. Nagasawa built for 10 times sprint World Champion Koichi Nakana, as well as building frames for Dave’s teammate Matthew Crampton.

“Dave was also eager for a try on a steel track frame and we felt our S1 prototype would be perfect to give him a taste.” 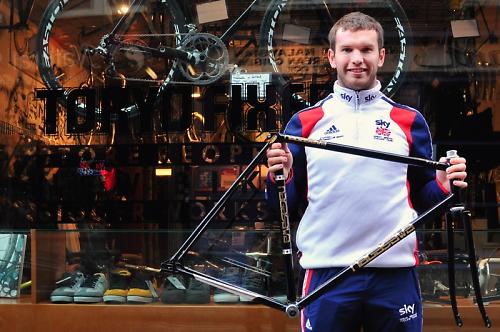 Gambling on keirin racing is big business in Japan so all riders are subject to strict equipment rules that make the bikes technically very similar. All bikes and equipment must be made by a certified builder using approved materials and then stamped by the NJS. It makes the UCI’s equipment regulations policy look positively relaxed.

The Tokyo Fixed S1 that Max mentioned uses stiff and light Columbus Spirit tubing and comes with a fork that features aero Kasei blades. The driveside chainstay is chromed and you get Japanese stainless steel-plated dropouts. The frame and fork package costs £750.

Keirin racing began in Japan back in the late 1940s and was eventually added to the Olympic programme in 2000. Chris Hoy is the current Olympic champion. It’s a 2km mass-start race between 6-9 riders who are initially paced by a derny motorized bike. With 600-700m to go, the derny swings off and the riders sprint it out.

For more details on the Tokyo Fixed range go to www.tokyofixedgear.com.