The bikes designed to take on the cobbles
by Mat Brett

It takes a special kind of bike to get riders over the Paris-Roubaix cobbles in comfort and at speed, and Team Sky reckon they have just the weapon needed.

We’ve been riding with the Sky boys on their recon of several sections of pavé – courtesy of sponsor IG Markets – and Bradley Wiggins, Geraint Thomas, Juan Antonio Flecha were aboard Pinarello Kobh road bikes which have been developed especially for the northern Classics (more on the ride later). 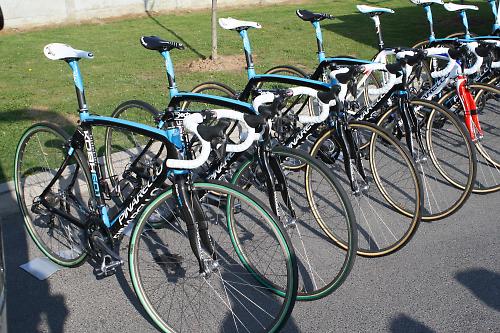 The Kobh has a seat angle that’s about a degree shallower than that of the Dogma, Team Sky’s usual weapon of choice, and the steering angle is slacker too. The rear triangle is slightly extended with chainstays that are a few millimetres longer than standard, and the fork has 47mm of rake rather than the usual 43mm. 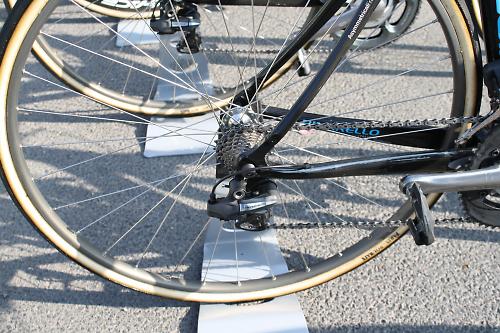 That all means the wheelbase is a touch longer than usual so, Pinarello say, the riders get a less vertically stiff frame and a greater capacity to absorb shocks over the bumpy sections. A longer wheelbase also adds a little extra stability. 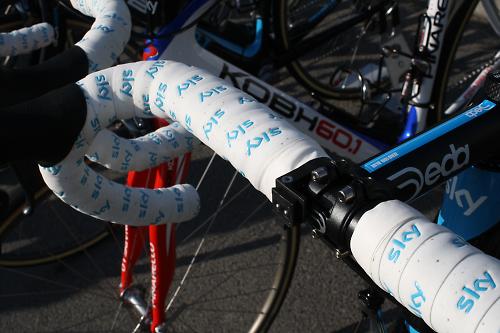 Another concession to the cobbles is acres of bar tape. All the Team Sky riders are going with at least two layers; Wiggins is on three or maybe even four, taped right up to the stem. It doesn’t just add cushioning, it means you have a big old palmful of bar to grab which is great when your hands are tired. The cockpit components are aluminium – Deda Zero 100 Blue bars and stems; there’s no carbon in sight.

As for the wheels, Team Sky are running Shimano Dura Ace hubs on Ambrosio shallow-section, eyeleted rims and some pretty meaty looking spokes – 32 front and rear. The tubulars are from FMB – some 25mm, but most 27s. They also keep the air pressure really low – they vary between the two wheels and according to rider weight, but it’s around 5 to 5.5 bar which is pretty darn soft.

Groupset components for all riders on the team are Shimano Dura-Ace with Di2 shifting, some with additional satellite shifting from the tops. The only slight modification is that they’ve added a blue anodized Token chain drop catcher device (snappy, huh?) inside the front mech to avoid any mishaps on the cobbles. It’s a strip that simply stops the chain over-shifting/bouncing off the inner chainring.

When it comes to saddles, they’re all on standard Prologos although Wiggins’ is personalized with a picture of him on one of his scooters. Geraint Thomas just gets a normal saddle but his bike is red, white and blue rather than the usual Team Sky black and blue, courtesy of his status as current British road racing champ. Oh, and rather than their usual carbon bottle cages, they’re all using aluminium ones that they bend right in to hold their bottles super-tight to stop their drinks jumping out.