This is the brand new Specialized S-Works Project Black McLaren Tarmac SL4 belonging to Team Astana’s Alexandre Vinokourov, the Kazakh rider who is likely to be battling it out for top honours in the general classification of this year’s Tour de France - feast your eyes, we've got words, pictures and video.

As we reported last week, Specialized reckon the new incarnation is both lighter and stiffer than ever before. We got the chance to check it out when we visited the Team Astana hotel last week in the lead up to the big race… before Vino came and nicked it off us. Something about a training ride he had to do.

It’s only a year since Specialized launched the SL3, but they claim that the SL4 is 16% stiffer than previously, with a stiffness-to-weight ration that’s 19% higher. This Project Black McLaren version – McLaren as in the F1 people with whom Specialized collaborated on the Venge – could have slightly different figures again, in fact it's basically the SL4 taken a step further - we're guessing this is more down to material layup than the design though because as far as we can see it doesn't look different in terms of frame profiles from the SL4. So what’s different from the SL3? Remember that, it's only a year old. The SL3 used Specialized’s Cobra head tube design: where the top tube and down tube partially wrap around the tapered head tube. The designers have taken things further with the SL4 to produce the King Cobra design. 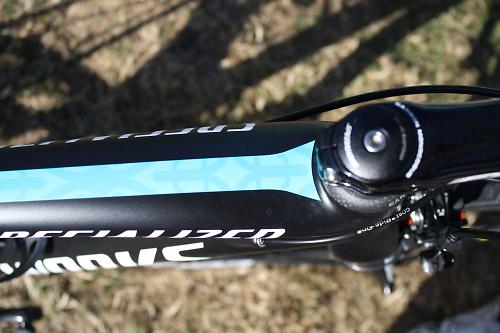 They’ve stiffened and strengthened the junctions through the use of this wrapping technique to the point where they can narrow the head tube slightly. The crown is now 1 3/8in rather than 1 1/2in – so having taken the bearing size up, they’re now bringing it back down a bit – while the upper bearing remains 1 1/8in. This means a little less material in the head tube, and the smaller bearing is a tad lighter; a tiny amount, admittedly. 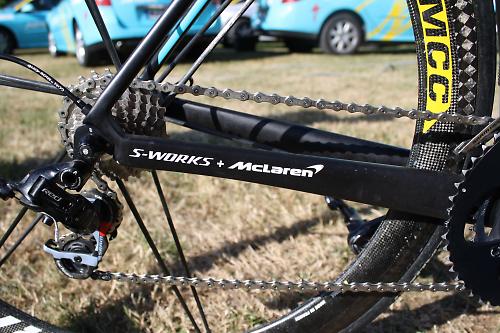 The SL4’s bottom bracket shell and chainstays are constructed as one piece rather than being joined together after moulding. The SL3 is made in the same way – and other manufacturers use a similar process – but Specialized say they’ve managed to stiffen things up back there just a touch with the new model for improved efficiency. There’s internal ribbing in there to add to the stiffness, as there is in the head tube. 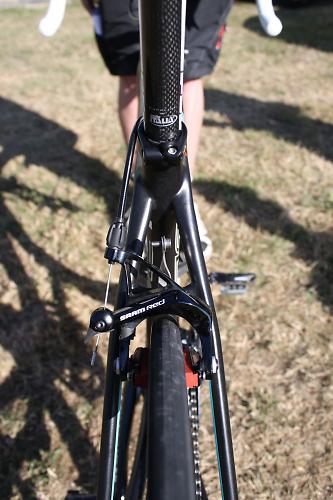 The seatstay design is new, featuring a wider stance than before which is intended to improve stiffness. Specialized reckon that what they call ‘dual-taper shaping’ near the bridge maximizes braking performance too; it’s skinny at the top, flares out for the brake bridge, then tapers in again. Up front, the straight-legged fork is 10% lighter than before and the front and rear dropouts are now hollow carbon with co-moulded steel inserts to increase durability – a design borrowed from the Venge. 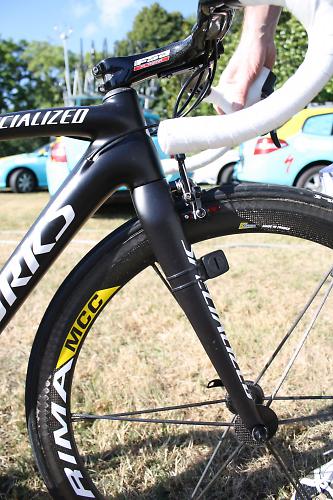 Like many other manufacturers, Specialized have gone down the internal cable route with the SL4, plumbing the rear brake cable inside the top tube and both gear cables through the down tube. That should help keep them clean but we suspect the update is largely down to looks; it just gives a cleaner appearance. It’s Di2-ready, of course, although Astana run SRAM Red groupsets. 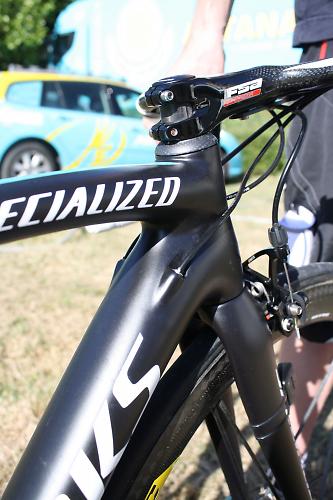 In terms of weight, Specialized quote 1,995g for what they call the SL4’s ‘frame module’. That comprises frame, fork, headset, bottom bracket and crankset. That makes comparing it to anything else out there pretty awkward but the SL4 is certainly among the lightest options out there. Specialized claim is the stiffest complete module in the industry although they’re not making any such claims on the weight front. They say that going any lighter would have compromised the stiffness and handling and they weren’t willing to do that. 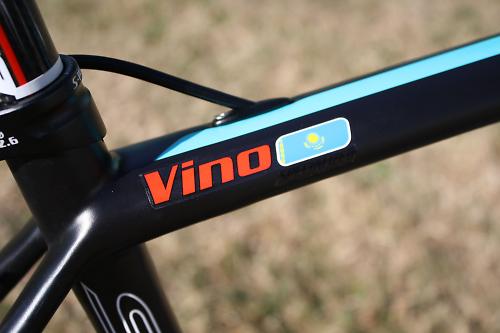 There aren’t too many of these SL4s about. On Team Astana, Vino and Roman Kreuziger have two each for the Tour de France, as do two riders from each of the other Specialized-sponsored teams – HTC-Highroad and Saxo Bank Sungard. The S-Works Tarmac SL4 bikes will be available at some Specialized dealers later in the year although there’s no release date set for the McLaren version. Whether it gets released and, if so, when depends on the fine-tuning necessary after data and rider feedback from the Tour de France.