UK brand Forme are expanding their range to 40 bikes for 2012, offering cyclocross bikes and a time trial bike for the first time and increasing the number of road and urban bikes on offer.

By the look of the bikes and their prices, Forme are continuing to emphasize value for money – which is how they’ve managed to gain a decent toehold in the market already despite being launched just a year-and-a-half ago.

There are three cyclocross bikes on the way, all available from March or April next year. Two of these will be based around triple-butted 7005 Series alloy frames. 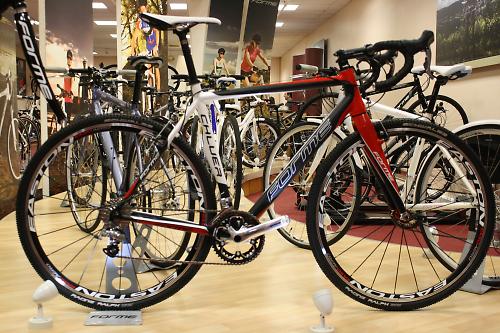 The Calver X Race, as the name suggests, is designed for competition. It comes with a flattened section on the underside of the top tube to add to the comfort when you sling it on your shoulder, and the cables for the canti rear brake and the rear mech run along the upper side of the top tube where they’re out of harm’s way. The head tube is tapered to add front-end stiffness and reduce brake judder; it’s 1 1/8in up top and 1 1/2in down below. The fork is made from high quality carbon composite – Torayca 700 12K – and although the sample frame and fork at Forme’s launch came with eyelets, they won’t be there on the real thing. It’s a race bike, after all. 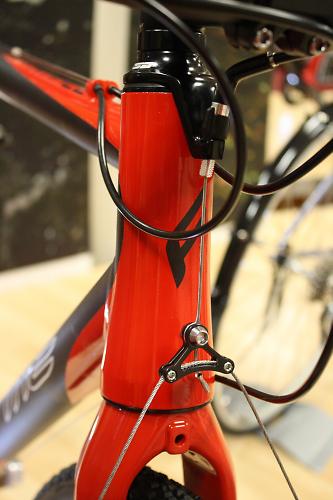 The groupset is Shimano’s mid-level 105 with an FSA Gossamer CK chainset, and like many of Forme’s higher-level 2012 bikes, the Calver X Race gets lots of kit from Easton. They’ve really not skimped when it comes to the spec sheet. Those are Easton EA50 Aero wheels with Schwalbe Racng Ralph tyres and that’s an Easton alu cockpit too. 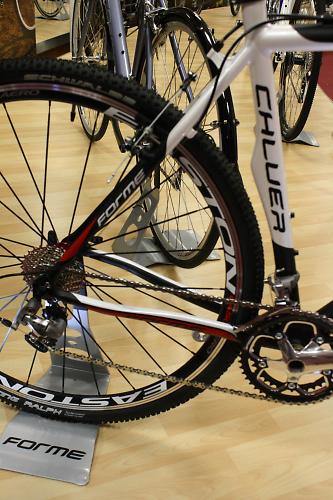 The seatpost is an EA70. Although the sample bike in the picture has an inline clamp, that’s simply because that’s what Easton sent through first. The production bikes will have layback and the same is true of all the road bikes with inline seatposts in the pictures below The Calver X Sport has a similar frame and fork but you do get eyelets on this one because it’s intended to be a crossover bike that you can use on the road – a bombproof commuter, essentially. This one gets a 10-speed Tiagra groupset (the next one down from 105) and you forego big-brand components for in-house kit, although you still get Formula hubs and Kenda Kwicker tyres. That’s still a lot of bike for £949.99, though.

The other cyclocross bike in the range has yet to be finalized although it will have a carbon frame and come in at the top. Forme are still testing the design, though – mainly making sure it has enough mud clearance – before committing. It should be released in the spring, the same as the other two, if all goes well. While we’re on a cyclocross tip, the Hiver frameset has been available for the past six months. It uses 7005 tubing, the fork is full carbon and you can get your hands on one for under £300. 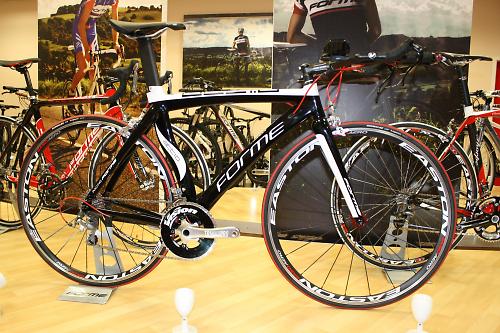 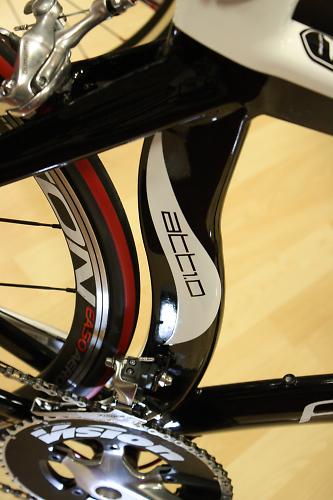 For your money you get a bike built around a 7005-alloy frame that’s been smooth welded so at first sight it could be mistaken for carbon. The cables run internally and the seat tube wiggles around the leading edge of the rear wheel. The aero seat post is carbon and so is the fork – Torayca 700 again. 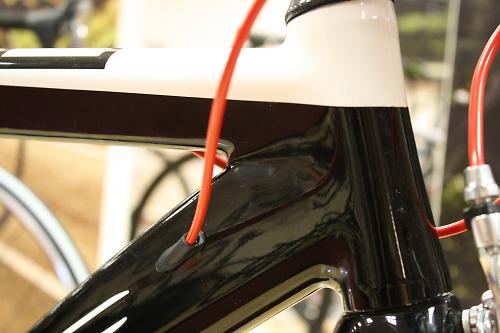 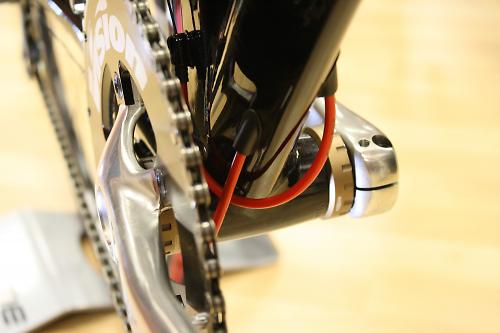 We can see Forme doing well with this one. There aren’t all that many TT bikes priced around the £1,500 mark, especially with branded components more or less throughout. 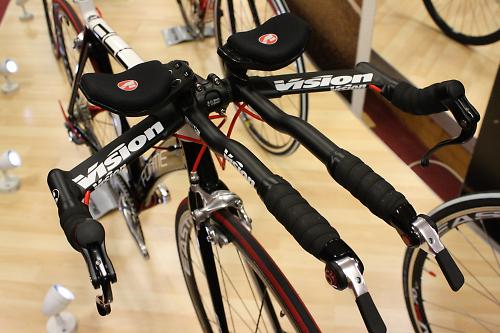 Right, road bikes next… Forme have rejigged things here to the point that none of last year’s bikes continue into the 2012 range. Well, that’s not quite true; none of them has the same name as before… or exactly the same spec, come to that. 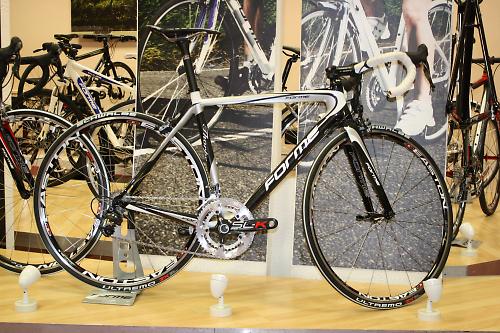 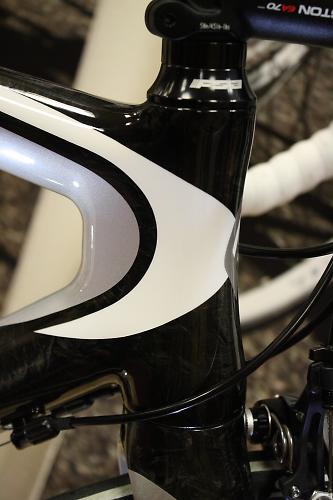 Top of the Thorpe Series is the Thorpe Elite at £2,999.99 (above, quite well camouflaged). Like the other two Thorpe bikes, it comes with a Torayca 700 carbon frame which is a good quality material. Forme haven’t just gone with the cheap stuff here so that they can shout about carbon in the brochure. The fork is made of the same material – both the legs and the steerer. They’ve really not cut corners. 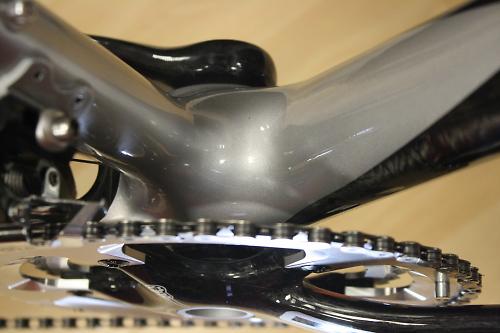 The Thorpe Elite frame comes with a tapered head tube (1 1/8 – 1 1/2in) and a BB30 bottom bracket – features that have become pretty much standard on performance-focused road bikes over the past few years. You get tons of value on the spec sheet. It’s a Shimano Dura-Ace build with an FSA SL-K chainset, Easton EA90 SLX wheels (they have a claimed weight of just 1,390g), an Easton carbon seatpost and an aluminium cockpit that’s also from Easton. Pretty much everything is branded, down to the lightweight Schwalbe Ultremo ZX tyres. The only in-house component we spotted is Forme’s own saddle and that comes with titanium rails. 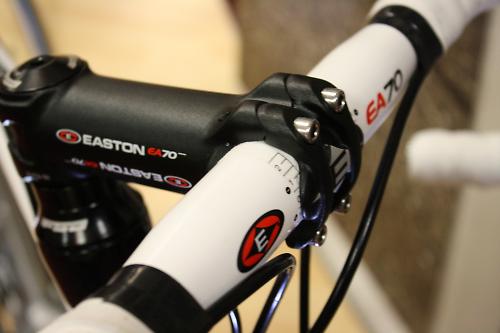 Forme reckon the all-up weight is 14.5lb (6.45kg). That looks like a helluva bargain for £3,000. We know that’s a lot of money, but you’d be digging a whole lot deeper for a bike with a similar spec from one of the bigger, more established brands.

Unusually, Forme aren’t producing an Ultegra Di2 model for 2012. Controversial! Everyone else is. They think it’s too risky to put unproven kit on bikes from a brand that has yet to make its name in the market. We’ve got to say that we think they’re missing a trick here but we can understand where they’re coming from. 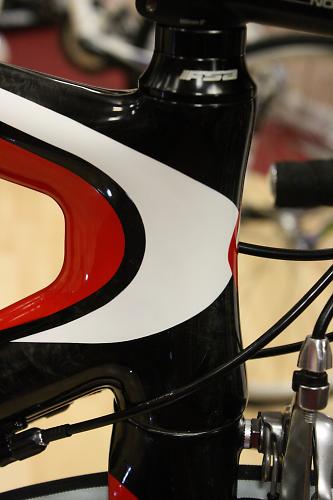 Forme are producing a mechanical Ultegra-equipped bike in the shape of the Thorpe Comp 1.0 (main pic at the top). Again, you get a tapered head tube and a BB30 bottom bracket, it’s just that the spec is a little lower all round. It comes in at £2,199.99. The entry-level Thorpe is the Comp 2.0. This one gets a SRAM Rival build and Mavic Aksium wheels and costs £1,999.99. The Axe Edge Series uses the same Torayca 700 carbon as the Thorpe bikes but the frame design is different. Check out the back ends (Thorpe above, Axe Edge below). Forme reckon the snaking stays of the Axe Edge along with the layup of the carbon provides more comfort. The other key difference is that the Axe Edge bikes come with far fewer branded components, in-house kit being specced to keep the prices low. The top model, the Comp, gets solid, reliable Shimano 105 parts but the hubs, cockpit, seatpost and saddle are all Forme’s own. Still, at £1,499.99 it still looks like excellent value. The other Axe Edge bike, the Sport, has a Tiagra build and costs £1,299. 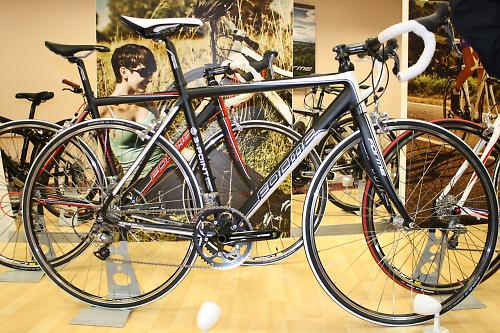 The final road range is the aluminium Longcliffe Series, designed with half an eye on making important price points and built with a less aggressive geometry. 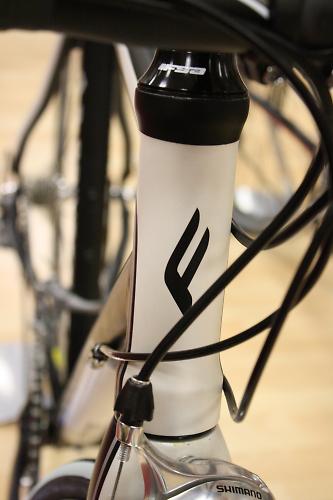 The range-topping Longcliffe 1.0 costs a penny under a grand. You get a triple-butted 7005 Series aluminium frame that’s smooth welded so you can barely see the ripples, and a Torayca 700 fork. Sounds promising. It comes with Shimano 105 shifters and derailleurs, a compact chainset from FSA and Mavic Open Pro rims laced to sealed-bearing hubs. We’ve not ridden it but if you’re in the market for a £1,000 bike, you surely have to take a serious look and line up a test ride. 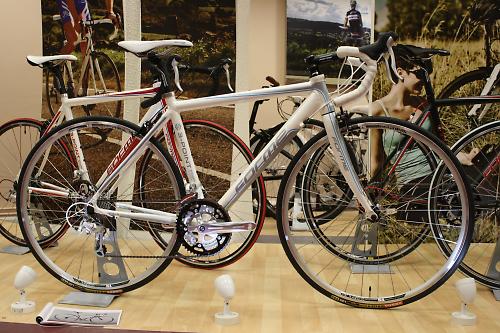 There are three other bikes in the Longcliffe range, two of them with female equivalents. This is the Longcliffe 3FE (Feminine Ergo), for example (above), and Forme haven’t just given it a different paintjob, they’ve made the frame more compact. It has a shorter top tube than on the men’s bikes because women are generally shorter in the torso.

Forme have also increased the length of the steering tube and given the women’s bikes narrower handlebars. They fit female-specific saddles and shorter cranks too. Sounds to us like it’s well thought-out. The Longcliffe 3 FE comes with a Shimano Sora group and, like the men’s version, it costs £699.99. If that’s too much, the Shimano 2300-equipped Longcliffe 4 FE is the cheapest in the range at £574.99. Over on the urban side of things Forme have introduced a new model called the Winster 2.1 (not to be confused with their Winscar mountain bikes). The frame and fork are aluminium and the groupset is Shimano Altus – a triple chainset with a 7-speed cassette. It gets Tektro V-brakes – sorry, linear pull brakes if they’re from Tektro – and Formula sealed bearing hubs. Mudguards and a rear rack are fitted as standard so it’s ready for commuting right from the off. 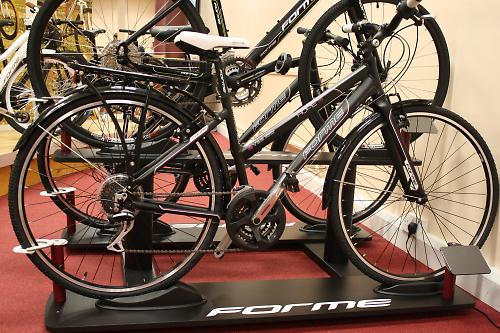 For information on Forme go to www.formebikes.co.uk although the 2012 bikes weren’t on line last time we checked