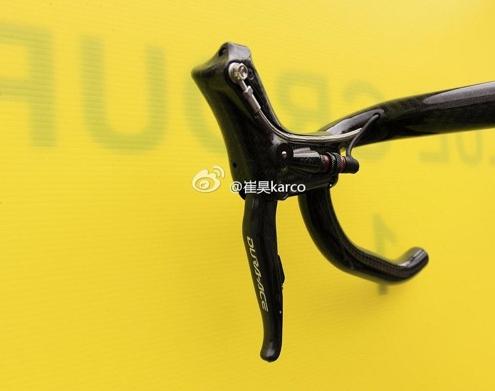 Is this a new Shimano Di2 hydraulic lever? UPDATED

Hong Kong blog blows cover on something but is it really Dura-Ace?
by nick_rearden

A picture has appeared on the website flwrider showing what appears to be a Dura-Ace lever in a new design that appears to combine both electronic shifting buttons and a hydraulic brake pipe emerging from it.

As we posted back in October, Shimano are rumoured to be developing both an 11-speed Dura-Ace Di2 system and some version of disc brakes to go with it.

We say 'some version' because although part of the flying speculation agrees that hydraulic actuation would be an advantage over the convoluted routing of traditional Bowden cable through a modern carbon-fibre frame, others have poo-pooed the idea as an unnecessary step. To be fair, they're probably the people repelled by the very idea of disc brakes on a road bike, anyway. But they're going to have to get used to the idea because as our mystery Insider says in his recent post, they're coming whether we like it or not.

This spy shot seems to raise more questions than it answers. It surely does say 'Dura-Ace' on the lever itself but that may be because the maker has utilised an existing part from Shimano. The American site Bikerumor that specialises in this kind of stuff even appears to have uncovered a connection back to the British F1 company developing the Factor 001 we posted about back in 2009. The lever at the top here does look suspiciously like the one shown in factor 001 pictures on their site.

Update from The Insider

Our own Insider was on in a flash confirming that this is NOT the Dura-Ace Di2 lever or at least not the one we're expecting. As he points out viz a viz the Factor 001, "Giveaways are 1. it looks identical, two Factor 001 use Di2 and 3 it (the body) is carbon – Shimano's would be injection moulded and most probably rapid prototyped at this stage.

Or, in other words, what we're looking at is the existing Dura-Ace Di2 lever with its attendant shift switches to go with the Shimano Dura-Ace Di2 gear mechanisms, all mounted in Formula's own carbon-fibre body with hydraulics built in. Neat. 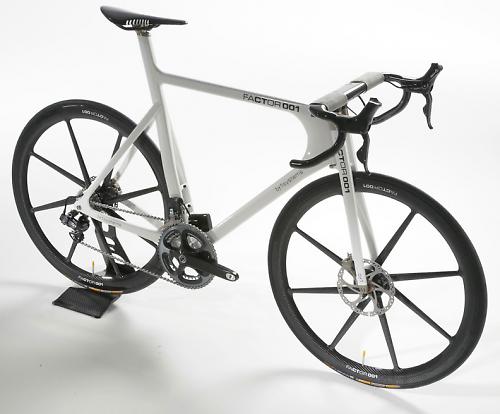 The latest version of the Factor 001 road bike from bf1systems in Norfolk has disc brakes.