Made In England - Book Preview

“Made In England” – Sneaky Book Preview

“Made In England” is a new book showcasing the artisans behind the British hand-built bicycle and due for release in late Summer 2012. Matthew Sowter worked for Enigma bikes, learning his trade under Mark Reilly after being trained as welder in South Africa, and when not building frames he’s racing them on the road and cross-country. Ricky Feather started Feather Cycles in 2008 after a stint as a pro BMXer, and he has become one of the youngest and most promising frame builders in the U.K at the moment. 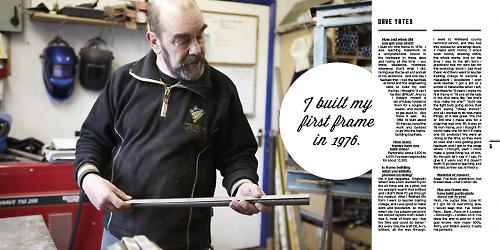 The pair conceived the book to share and extend their passion for frame building, hoping it will inspire more people to follow their foot-steps in the hand-crafted industry. They believe that “Made In England” could uplift the current bike industry as a whole, further encourage the resurgence in hand-made bicycles and create more awareness by shining some limelight into the grubby faces of frame-builders and to drag them out of the shadows where they usually skulk, filing away. But mostly Matthew and Ricky want the book to show, not only in the UK but also globally that British frame-builders are making quality products that are up there with the best in the world.

The artisans behind the handbuilt bicycle from Push Projects on Vimeo.

The book only includes frame-building companies that make all their bikes in the U.K. and features 12 frame-builders and one tubing manufacturer, highlighting the art, skill, methods, quirks, blood, sweat and tears that make up being a frame-builder. Intimate conversations with the builders are conducted in their workshops in a Q & A format with an average of 2500 words per subject. The 200+ page hardcover book is richly illustrated with exquisite photography of the frame-builders and their working environment, contrasting the raw, rough workshops with sleek images of the beautifully finished final products. Photographer Kayti Peschke has been shooting as a freelance fashion photographer for 10 years and has been the official photographer at Bespoked Bristol since its inception. 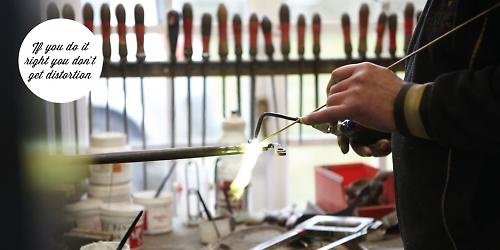