Packing the car in the cold damp dark and clattering the pistons along the motorway to catch the ferry gives the day all the feel of the start of a proper holiday abroad, but it’s just the Isle of Wight. I say ‘just’. The ferry from Lymington to Yarmouth is awash with cyclists all making for the Wight Riviera Sportive, half price crossing for sportivistas thank you very much, and no-one makes a “Ticket To Ryde” joke, there may have been a car on the deck but it was being quiet about it and the brief crossing is soundtracked with the awkward click-clack of cycling cleats trying to negotiate walkways and steps to toilets and coffees. Cyclists would have never discovered America. 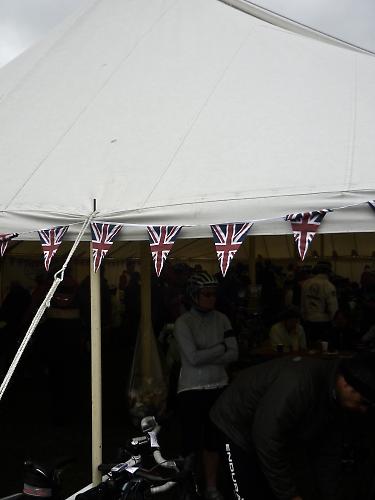 Rolling off the ferry it’s a 30 second freewheel to the Wight Riviera Event Village, with a brass band and marquees decorated with bunting it has a real village fete atmosphere, and they’ve even laid on little spits of rain for that traditional British air. It’s a typical grin-and-bear-it grey day out, but considerably better than it could have been, the habitual half-hourly check on the weather forecast in the preceding days promised a rather grim, wet and depressing day, but it’s turned out to be thankfully just a bit dull and windy to start off with, cheering up slowly over the day to eventually let us sprawl at the finish in bright sunshine, just right for enjoying the free ice cream, cup of tea, muffin and piece of Wight Riviera rock each rider got in their goody bag at the end, and warm enough to swap stinky cycle tops for the free event t-shirt, a good quality one at that, not your usual straight-to-bike-cleaning variety. The Wight Riviera Sportive offers three routes to play out on, 154km, 110km and 65km as well as a more family and have-a-go oriented 25km Riviera Ride that just runs around the initial closed roads “Avant” loop of the event. Oh yeah, whatever length route you choose the first 25km are all on closed roads, a nice touch to the usual sportive course, um, design. The mix of bikes and riders out to enjoy either their quick spin or a day-long challenge means that for the controlled mass-start roll-out a Specialized Venge with all the carbon toys is lined up next to a supermarket-special BSO that probably cost less than the former's Garmin mount, ridden with wellies. Glorious. With about 500 riders of such extreme variety riding side by side there could be carnage on the roads but it’s remarkably well behaved, with no showing off from the fast boys or erratic manoeuvres from the less experienced, and the luxury of being able to take up the whole road for the initial Avant loop, especially when sweeping through corners, is a mildly intoxicating joy. Although it’s not as if we spend the rest of the day on open roads flinching from traffic, there are a few times where the course has to join itself up by using main arterial roads but they’re not exceptionally busy and the motorists are polite and patient enough, and the lanes and minor roads the make up the meat of the ride are empty and suitably carefree tarmac.

The first crunching of gears comes at only a couple of miles in with a tricky downhill-to-dogleg-left-uphill corner, and it catches more than a few unawares as the gutter is sprinkled with broken chains, swearing and cyclists helping each other out. From there it’s a quick blast down to Freshwater and more frantic flapping at STIs with the long draw over Compton Down, the day is still a bit dull and grumpy so it’s not exactly a jolly scamper over the cliffs although the tailwind does help. From there the Avant loop heads north back over the Downs and round to Yarmouth where riders file through the event centre once again, snaffle some food from the first of three feed stations and head back out onto their chosen distances. 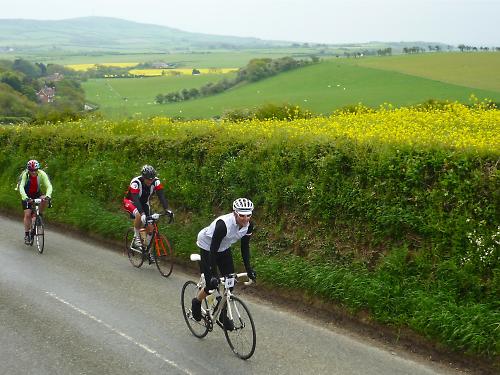 The route is well signed and as it splits for the 65km and then the 110km the mass of riders thins out a little bit more each time so by the end we’re riding pretty much alone on the 154km route around a quiet and seemingly deserted island. When we meet up with riders we join wheels into small pelotons which eases things along nicely, but as is the way of unfamiliar riders and different schedules these disbanded quickly and we were again plugging away alone. I’m riding along with my regular training/riding/racing pal for company, he grew up on the island, although it doesn’t show, and he gives an unique stream of local history to help the miles go by; you can see where my Dad lives, I rolled a car into that field on the way back from the pub, my Grandad’s buried in that churchyard, this is where I lost my virginity, handy information you don’t usually get in the tourist guide.

The long route unrolled an unrelenting undulating course with seemingly no flat bits to get the breath back, and the sheer variety of gradients made it impossible to maintain any kind of rhythm. Long long drags up valleys that got steeper at the top as the road makes a last gasp up the hill, short steep punches up to hilltop villages, rolling roads that slowly chip away at energy and more than enough head-down and grunt away plain old steeps to test the spirit. With just over 2,000m of ascent on the 154km route it’s not exactly a knee-popping litany of wishing you had a compact chainset, but the rusty saw-blade profile was relentless and certainly made up for any chunky lumps of climbing. And what wasn’t uphill was into a headwind. The infamous Military Road that strikes fear into the thighs of any cyclist that’s visited the island before, sticking to the southern edge of the island it’s devoid of cover and was hard work into the sticky headwind. Thankfully the route designer was kind enough not to direct us all the way along the coast road and diverted us into the shelter of inland, even if that takes us over the stiff climb of Brightstone Down, a mean trick at 70 miles in, one of those climbs that hides its wall of tarmac just round the corner and prompt an involuntary “Ooof” under the breath, we saw one rider doing the cleated duck-walk of shame, we’re guessing there were more. 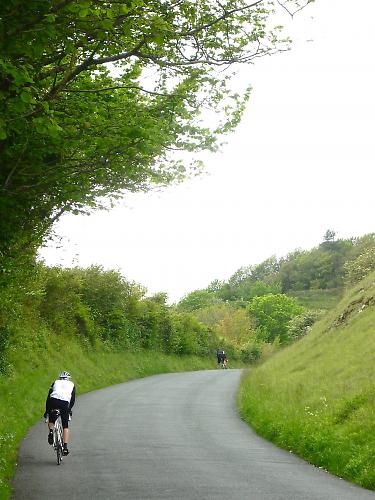 For some reason some sections were really sluggish, despite a good speed the ticking over of bike computer numbers seemed to take forever, maybe it was due to the complete lack of knowing where we were. Are we heading towards the sea or away from it, well, actually, both, is that the same bit of water we were looking at half an hour ago? Maybe it was the weaving in and out and through an eerily timeless landscape of ancient lanes and unchanged scenery? Perhaps a slight fear of the next hill, where’s the next hill, there must be one soon, didn’t we climb this one already?

After 80 odd miles we rejoin the Avanti loop we did several hours earlier but head towards the finish in the reverse direction, which means one more ascent of Compton Down, but into the wind that was so helpful at the start, but also into the eventual sun, swings and roundabouts, swings and roundabouts. There’s a lot of nearly-there groveling up the final climb and the tantalising meandering squeezing-the-miles-in run back into Yarmouth and we’re done, and slightly done in. Is that a free ice-cream, thank you. We drag ourselves away from the emptying event camp and coax weary legs the few hundred yards into Yarmouth for some beer and chips before getting the ferry home, and while waiting to see if we can squeeze on the next boat I’m bumped into by a fellow rider from last years Haute Route, the week-long schlepic 730km ride from Geneva to Nice with 17,000 metres of climbing over all the pointy bits, so quite a hard pedal then. He was slightly stunned as to how hard the Riviera Sportive was, and I could only agree. If people that have survived the worst that the Alps can chuck in front of their wheels can agree that this is a tough ride then it certainly isn’t a day out to be taken light-heartedly. How can it have been so hard, it was just the Isle of Wight.