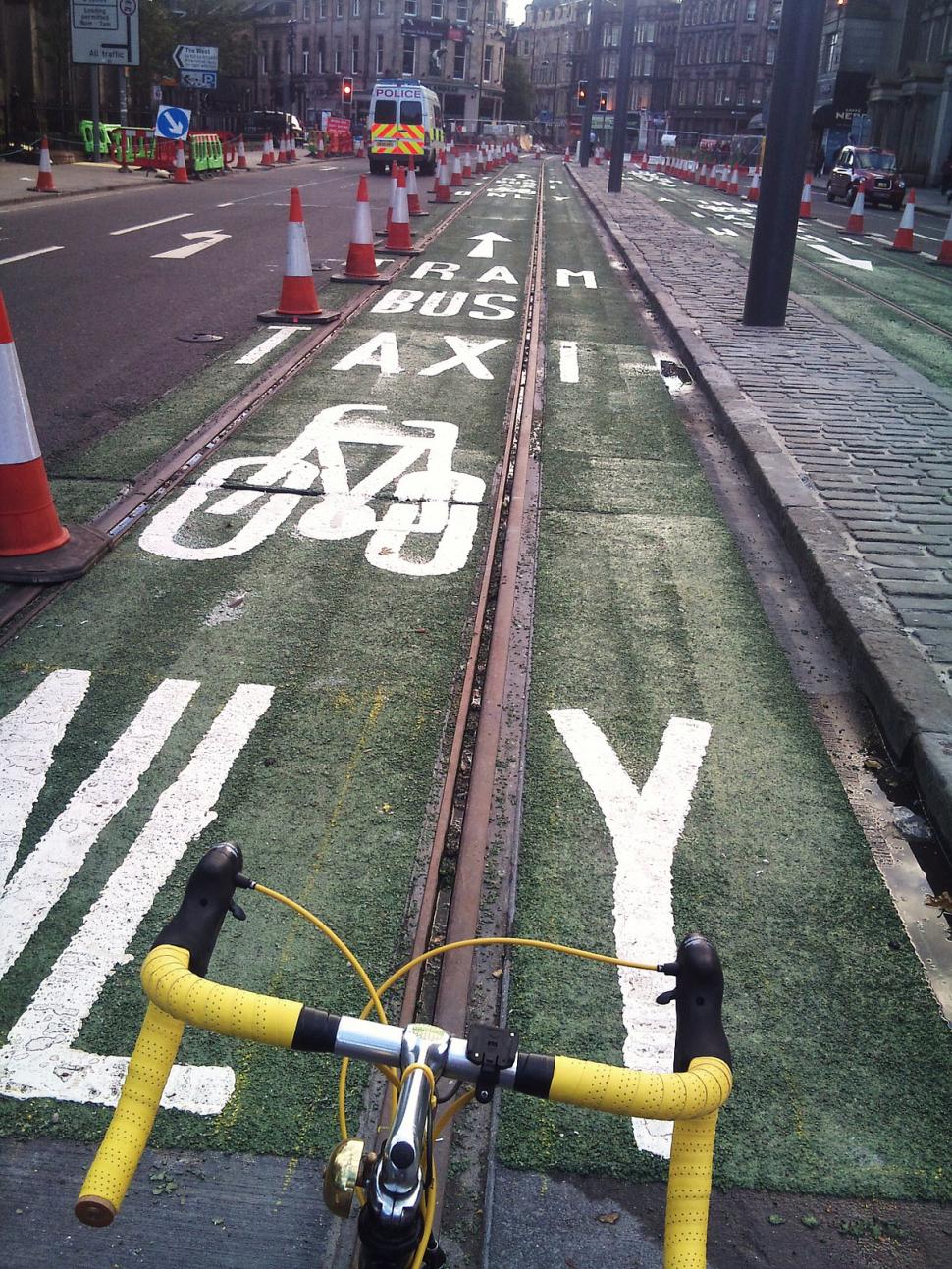 One of Edinburgh's busiest shopping streets has been described as a 'crazy death trap' by cyclists who have been funnelled into multi-use lanes shared with trams, buses and taxis.

Princes Street, which reopened to buses early this morning after several years of renovations, including a new tram system, has been painted green on both sides with white bike signs betwen the tram lines.

Cyclists have been told that they should not cross the lines if a tram comes up behind them, but carry on, potentially delaying the service, the Scotsman reported.

There has also been confusion as to whether the green lanes, painted with bike signs, are actually bike lanes at all.

Official guidance to cyclists in publicity material advised: "Ensure you cross at an angle which is as close to 90 degrees as possible. Unlike buses, the tram path is fixed by the track - keep out of its way."

A council spokesman told the Scotsman that the new markings were not intended to create a cycle lane, merely make it clear that cycling was allowed.

A training video on the Edinburgh Trams website also states: "Unless you're turning right, it's better not to ride between the tracks. The tram can't swerve, so if something goes wrong the driver has to make an emergency stop and that can take the length of the tram.

Kim Harding, a qualified cycle trainer, told STV: "You assume it is a bike lane because they've painted bikes on the road, yet the advice previously has been to not ride between the tracks. This contradicts that.

"I think people will ignore the markings and ride on the left lane, but that just causes problems when buses stop and cyclists have to overtake, which means going over the tracks.

"I came off the bike once while crossing the tracks at a good angle before because it was wet.

More than two years ago, we reported how Edinburgh Tram was sponsoring training for cyclists around tram lines after at least six cyclists had accidents in the area. The work was halted and started again twice since then.

Financial services worker, Andy Arthurs, 29, from the Meadows, told the Scotsman: “It really is crazy, they’ve basically designed a death trap for cyclists. The tracks are wide enough to get your tyre stuck in so how you’re meant to navigate it I’ll never know.

“Danny MacAskill would have problems. It takes just ten seconds for anyone to see how stupid and lethal this is, so I really can’t understand how it’s made it through design and approval without anyone ever questioning it.”

A blogger called the Magnificent Octopus wrote online: "The tram lines have proven to be a nightmare for cyclists - set in smooth concrete or rough setts, with buses and taxis forcing your line and on dark and wet nights, many a cyclist has fallen victim to them and broken their... bones and their bikes.

"It was apparent that the people behind Edinburgh's tram had made absolutely zero allowance in their thinking around how cyclists might "interact" with tram lines when forced across them at shallow angles by poor road design and by other road users.

"It will be a matter of days before another cyclist is brought down here."

In the inter-war years when many UK cities had tram networks trams claimed the lives of many cyclists some celebrated ones amongst them including the celebrated French frame builder and racing cyclist Maurice Selbach who died after colliding with a lorry in South London in 1935 after his wheel clipped a poorly laid tram rail.