More highlights from Core, this time from cutting edge carbon to retro steel, do-anything practical to full on performance
by David Arthur @davearthur

We're back, a bit jaded, from Core Bike Show 2013. The early season show has just drawn to a close, and we've returned with mermory cards bulging with photos. We brought you a quick glimpse of some of the new bikes on Monday, and here's another whizz around some of the hottest brands that were on show. As ever at this show as well as all the bikes you can buy  some of the most interesting bikes on display are ones you can't buy, we've already featured the identiti Initial-d carbon bike and two prototypes from Kinesis - this time we'll be featuring some complete one-offs.

All City and Surly 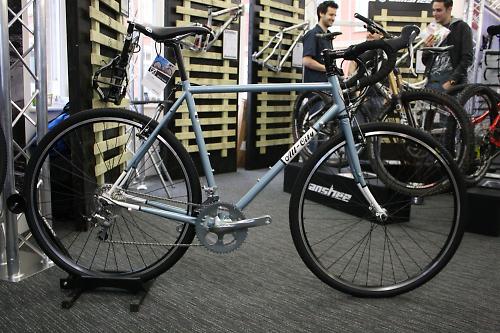 Last year the Space Horse, from US outfit All City was one of the stars of the CORE show, a bike designed for the rider who wants a fast, practical machine, but above all versatile. Built from chromoly steel with double butted seat and down tubes, the Space Horse can be set up to be run either geared or single speed and can take racks front and rear - the geometry is designed to boost stability when loaded, but also to make it nimble when you pour on the speed. It certainly looks good with or without rack(s) or mudguards too and that beauty is more than just paint deep with a full inside and out rust proofing ED coating to further boost durability and longevity. 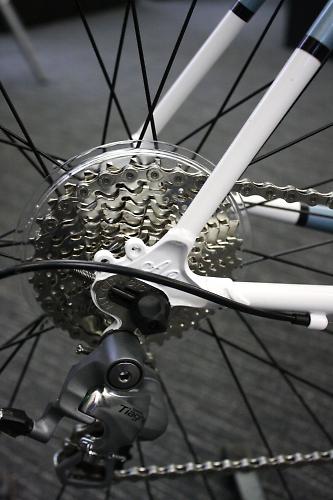 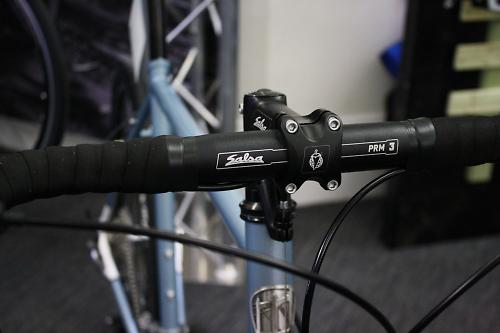 All City haven't been resting on their laurels, with a new silver blue paint job - All City call it Elven Blue, which to our eyes at least is a big improvement on last year's orange. You also get an uprated build kit featuring a Salsa Pro Road handlebar and Pro Moto stem along with 10 speed Shimano Tiagra and an uprated tyre - the 35c Freedom Rider which again fits in with the durable all-rounder theme. The Space Horse is available as a frameset for £499.99 while the RRP on a complete bike is £1349.99. 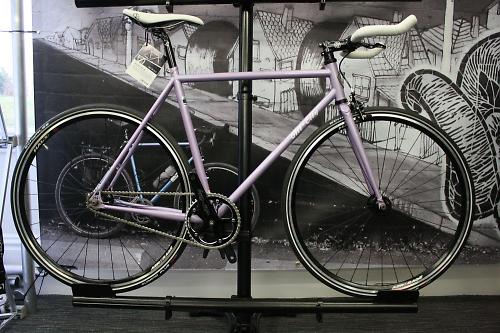 Also attracting attention was the latest version of the All City Big Block, it would be fair to say this baby divided opinion.  The main change here is the paint job… a metallic lilac, dubbed Sir Elton Lilac by the chaps at All City. It's fair to say it divided the room, we loved it as did Pat from Ison, who distribute All City in the UK, apparently though Mr All City hated it as did Chipps of Singletrack fame, but then he liked All City's pale yellow crosser which Tone said made him feel slightly queasy. Horses for courses the Big Block is also available in 'Solid Silver' at no extra charge. The Big Block's other big selling point is that while it's designed as a pure track race bike - All City have increased the tyre clearances to allow you to do plenty of other stuff too - it'll take up to 32Cs. They also reckon they've eliminated toe clip overlap - looking at the geometry we'd say they've shortened the chain stay a tad and lengthened the top tube a smidge (technical terms). A Big Block frameset will set you back £375 while a complete bike is  £829.99. If you want a real super-practical do anything bike the Surly Ogre might be for you - here it was in super-commuter guise with practical fat tyres and a Rohloff Speedhub drivetrain, but you could just as easily slap on a set of knobblies and head off-road, or whack on some racks for a full expedition tour. 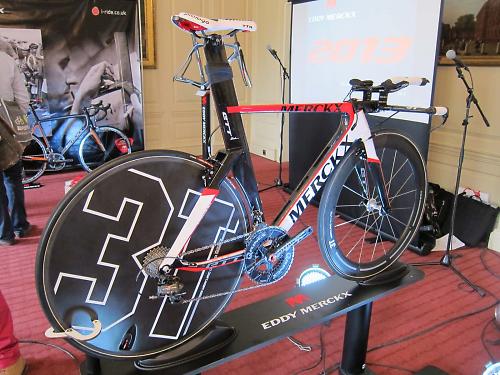 This striking time trial bike is the Merckx ETT. What sets it apart from all the other TT bikes on the market is the slotted down tube - what they call the Venturi Powerbox. The air is funnelled through these three slots and as it does so, speeds up in direct proportion to the reduction in area, which decreases drag. When it was first designed it met the UCI’s rules but they’ve since amended the rules so that no one can replicate it. Merckx have the okay to use it for the life of product, but they can’t change it or carry it over to the eventual successor to the ETT.

Integration is a key design feature. TRP’s mini V-brakes smooth the airflow around the forks and seat stays.

The slammed stem eats into the head tube and keeps the front very low.

The EMX-525 was released last year, we saw it the day before the London 2012 opening ceremony. Its name pays homage to the number of race wins by Eddy Merckx. The frame is all about stiffness in the pursuit of a very sharp handling bike. They wanted to focus on handling with this model, as the battle for weight is being fought out noticeably by other brands.

Both are well specified with 3T stem, bars and seatposts and Prologo saddles. We think, in this white paint finish, that it looks very nice indeed.

The Merckx EMX-3 is the company's fourth-tier carbon fibre road bike and, pictured here with a Campagolo Centaur groupset, it costs £2,399.99.

It has a similar frame to the EMX-1 but a different carbon fibre layup to increase stiffness for the more demanding riders who are going to spend this sort of money. There’s a tapered head tube up front, profiled main tubes and nicely shaped rear stays.

Eddy Merckx Corsa Extra was a frame produced in the late 1980s from a Columbus SLX tubeset.

Merckx's UK distributors i-Ride found this frame, heavily rusted, on eBay, and managed to persuade the Merckx factory to restore it to its previous lustre.

The result, we think you’ll agree, is simply gorgeous. This is a strictly one-off restoration project. 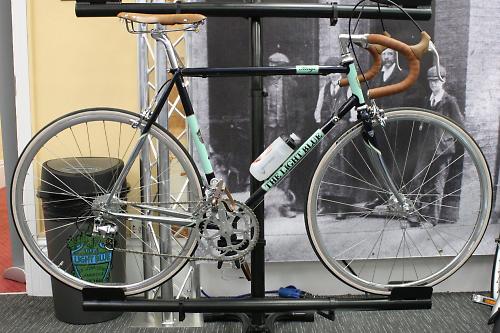 From a retro bike you can't buy, to one you most definitely can, the Light Blue Kings. Light Blue is Ison Distribution's in-house heritage brand… the first Light Blue was built and sold by Ison boss, Lloyd Townsend's great grandfather before the turn of the last century, the name of course is a reference to the fact that they're based in Cambridge. 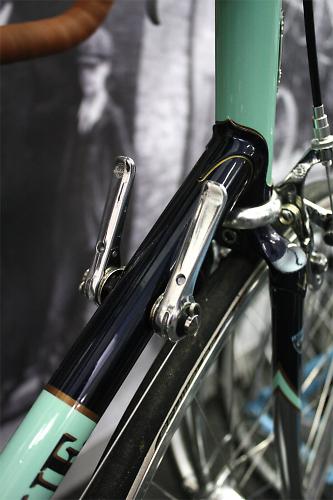 The Kings, made from 853 Reynolds lugged tubing debuted at last year's show, and this time out we saw the production version. The Kings is available as a frameset  for £799.99 - let's call it 800 quid then, and for that you get frame, forks, seat post, headset, and quill stem - you can build it up with down tube shifters for the full on retro vibe or go for modern gearing (it comes with neat little stops to put in the down tube mounts), we know which we'd be opting for thank you very much.

Here’s the latest version of the Felt AR, the company’s aero bike. Felt were one of the first brands to develop an aerodynamic road bike and it’s been due for an update. The biggest change is on the scales, where it’s dropped from about 1,400g to under a kilo. That’s a substantial difference, achieved by improving the carbon moulding process, that should make it more appealing to pro and amateur cyclists alike. Meanwhile, the F1 is to go-to choice for most of the riders on the Argos-Shimano WorldTour professional team. This top model is made from UHC Ultimate+Nano carbon fibre, a proprietary resin produces a stronger than usual bond between the carbon fibres say Felt. (This one belongs to John Deckonkolb and he rode it to a stage win at the Giro last year. There's a separate gallery of pics we took at the show here… and a separate story coming up too.)

The F1 is made using their Inside Out moulding process. Polyurethane inserts are placed inside the frame tubes and junctions during manufacture and pressure is applied to remove excess material. Lighter is the result, and a bike built  up with some nice, but not exotic, parts is easily under the UCI’s 6.8kg weight limit.

There’s also carbon dropouts while the BB30 shell has an aluminium insert. The head tube is tapered and cables are routed internally.

The Storck Multitask e-Bike has been around for a little while, but it was being shown here with a new 36 volt version of the Swiss built Radar electric motor.

It’s integrated into the rear wheel. The more powerful motor delivers more torque and has much more oomph for getting up hills.