A nose around the Cannondale, Trek, Bianchi, Scott and Ridleys at the Giro, plus SRM's new PowerMeter
by David Arthur @davearthur

In our first tech installment from the Giro d’Italia we had a good nose around the latest Pinarello, Specialized, BMC and Focus bikes. In this second roundup we turn our attention to Cannondale, Trek, Bianchi, Scott and Ridley. Races like the Giro d'Italia offer an interesting insight into the build kits of the team bikes and sometimes a glimpse of the latest products soon to make their way to a bike shop near you. 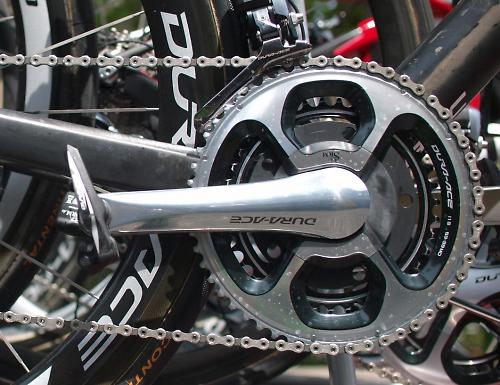 SRM now offer their new PowerMeter-compatible with Shimano's latest 9000/9070 chainset, with the four-arm spider, as opposed to the older five-arm design, still using the 7900 crank arms, however. 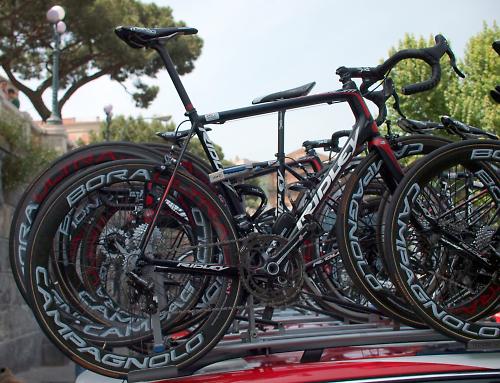 Ridley give Lotto-Belisol riders a choice of two bikes, the aero Fast and the lighter Helium. The latter, seen here, is the all-round choice and favoured by most of the riders apart from the sprinters who go for the aero advantage of the Fast. It’s a very light bike: just 790g of carbon make up the frame. Sponsorship from Campagnolo means a full complement of Record EPS (just about the entire team ride electronic over mechanical; how much of that is personal choice is unclear) along with Bora Ultra 50mm deep-section carbon wheels. They’re fitted with Continental Competition tubular tyres. The battery is mounted to the down tube, fixing to the same bolts that hold the bottle cage in place. 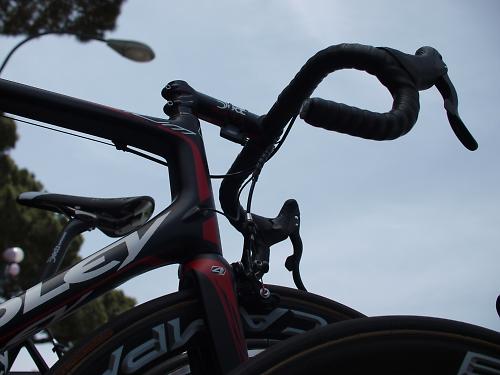 The team run Deda bars, stem and seatpost, with most opting for aluminium bars and stems. The weight isn’t an issue, they easily get them down to the UCI’s 6.8kg limit, so the added durability of the alloy bars in crashes and being chucked about during the three week race is a bonus. Long stems are the norm - this is 140mm. We saw the new Scott Addict at Paris-Roubaix, but for the smooth Italian roads most of the Greenedge team (as far as we could determine) were using the Foil. It’s been around for a few years - first spotted at the 2010 Tour de France - and was one of the first breed of the current aero road bike category. It was designed by renowned aerodynamicist Simon Smart, and every tube is profiled to decrease drag. Greenedge are supplied by Shimano and they’re using the latest Dura-Ace Di2 9070, an 11-speed electronic groupset. They’re also using a range of Shimano wheels, with a variety of rims on show before this stage. This is the deeper C75 which was being paired with a shallower 50mm front wheel. They’re using a lot of non-stickered Shimano rims. These have been around for a while, and several teams (including Sky) are still using them. We couldn’t ascertain if they were just old rims they’re still happily using, or if they’re testing different versions of a new rim design. Lots of Prologo saddles in the peloton, and the Scratch PRO TR is the choice of Aussie sprinter Matt Goss. Goss goes with a 135mm PRO Vibe stem with matching Vibe handlebar. That looks very much like regular electrical tape on the ends there, that you or I can buy from a hardware store, don’t you think? A 5mm spacer sits above and below the stem. Those white lines on the handlebar look like they're to mark the location for clip-on extensions. We imagine they’re ready for stage 18’s mountain time trial, a 20k slog from Mori to Polsa. Bianchi are represented in the Giro by two teams, Vacansoleil and the smaller Androni-Venezuela. The former are riding the Oltre XR, a bike which we’ve reviewed and liked very much. It’s a 900g frame made using UMS40 and CN60 ultra high modulus carbon, and it's packed with all the latest design details under that celeste paint finish. They combine Campagnolo Record EPS 11-speed groupsets with FSA’s K-Force Light chainset and gold chains. This rider uses Look’s Keo Blade carbon pedals, which use a flexy carbon leaf spring rather than a regular coil spring like most other pedals. 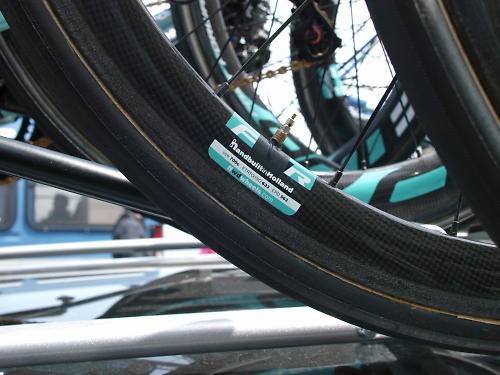 Vacansoleil are the only team to be riding wheels from Dutch company FFWD. It’s a standard looking 50mm rim with a traditional V-section shape. Most mechanics will apply a small strip of electrical tape around the valve hole, principally to prevent the valve rattling. After debuting the new Synapse Hi-Mod at the classics, Cannondale Pro Cycling are back on the trusty SuperSix Evo Hi-Mod for the Giro. Cannondale first released the Evo a few years ago and it’s one of the lightest production frames currently available at about 730g in its lightest incarnation. This bike belongs to Elia Viviani. He’s chosen FSA’s Plasma one-piece stem/bar setup, which increases stiffness, marginally, over a regular setup. An SRM PowerMeter mount is fixed to two Allen bolts on the underside of the stem. There's lots of SRAM Red being used at the Giro but no sign of the newer Red 22, the 11-speed groupset the company launched last month. Perhaps the rollout will be at the Tour de France. The very slender shaped chainstays, in combination with the similarly svelte seatstays, give the bike a bit of added comfort. 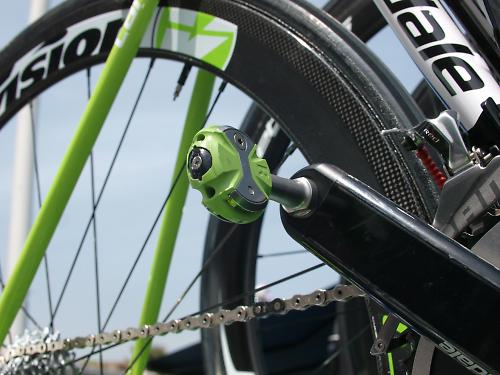 You’ll see a lot of riders on Speedplay’s pedal system. They’re well liked in the pro peloton for their huge amount of float (the movement they allow without you unclipping). It’s an FSA cockpit - seat post, stem, handlebars - for Cannondale, one of the many teams sponsored by the Italian component manufacturer. Fizik supply saddles, this one being a posh carbon-railed version. Cannondale might be sponsored by SRAM and FSA, both of which make their own cranks but Cannondale also produce a crankset, the SISL2, which they pair with SRAM Red chainrings here. Vision is FSA’s own brand. They use the label mainly for wheels and also some triathlon/time trial parts. These are their TC50 carbon tubular offerings, and they’re paired with Kenda tubs. Well, the label says Kenda... This Trek Madone belongs to Radioshack-Leopard team leader George Bennett. A young 23-year-old rider from New Zealand, he’s a rider to keep an eye on. He finished 15th overall at the 2013 Tour Down Under, but undeniably needs a few more years yet to mature into a GC contender. His speciality is climbing though and he weighs just 58kg. Maybe he’ll go for stage later in the race. All the Madones were fitted with either the Bontrager Aeolus 5, which seems to be their go-to choice for most stages, or the deeper Aeolus 9 D3, which you can just see in the background. They’re shod with Schwalbe Ultremo HT tubular tyres. It isn't every rider that opts for a long stem slammed onto the top of the head tube. This is a relatively short 120mm stem with a spacer under it. A Shimano Di2 shifter pod is zip tied to the centre of the bars for easy gear changes when riding on the tops. We mentioned earlier that SRM have only just released a new PowerMeter that fits with the new four-arm spider of the latest Dura-Ace cranks, but not all the teams have got their hands on it yet. More Speedplay pedals here too. The Madone accepts electronic groupsets and leaves this port redundant - we’d have thought they could have rustled up a white bung to fill the hole.