VecchioJo goes to Spin Up In A Brewery and seems to do nothing but drink beer. Which is mostly the point.
by VecchioJo

Any fool can arrange some sort of coming together in a brewery; it takes a real idiot to do it twice. Or a genius. Luckily the chaps at The Dark Star Brewing Company, Morvelo and Kinesis are the latter. 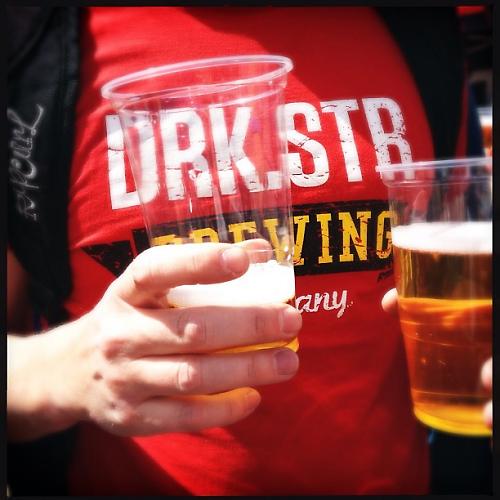 After an incredibly successful inaugural event last year it was a no-brainer to do it all again, but bigger and better. More cheerfully competitive roller-racing plus more good food plus barrel loads more local beer, what can possibly go wrong? The day kicked off with a Ride Out from Brighton seafront, well Hove actually, with road and mountainbike rides planned to meander on their respective routes across the Sussex countryside to converge on the Dark Star brewery in Partridge Green about 20 miles away. Not Epic and just possibly the minimal distance required to work up a thirst. It helped a lot that the weather was being kind and it could almost be described as the first day of Summer, more than warm enough to stand around happily chatting and taking over the prom whilst riders waited to be herded over the hills. Set at a casual social pace to match the vast variety of rider skills and bikes there was still the incentive to be first to the top of the hill, or eagle eyed, as Dark Star beer tokens had been liberally hidden along the way rewarding any rider that saw and pocketed one first with a free beer. 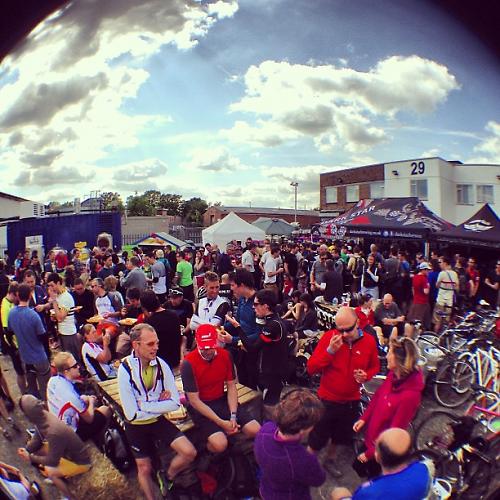 Once at the brewery, which is just across the road from where Kinesis bikes are based, it was time to claim your first beer for free and get down to serious business of eating and drinking, oh, and racing. The focus of the day was the Spin Up, head to head knockout roller racing courtesy of SouthCoast Sprints. A total of140 riders took part, and it could have been more as riders who spent too much time getting a beer and chatting in the sun before signing on had to be turned away as it was already full. Apparently. Cof. Racing went on through the whole day with the added bonus of special mini BMX roller-rigs set up so that kids could have a go as well, providing South Coast Sprints with their youngest ever competitor at 4 years old. It was a fast day on the rollers as both the men’s and women’s 500m SCS records were broken and at the end of battles overall victory went to Tom Vincent who retained his crown from last year and Alize Clough who won the women’s race by the slimmest of margins, both walked away with armfuls of Morvelo, Kinesis and Lezyne goodies and Tom pocketed a £300 voucher for a holiday with RPM90 as well. Other riders also received a generous haul of prizes and just so slower or non-racers weren’t left out random gifts were thrown out over the crowd on occasion, resulting in only minor injuries. And there was a raffle to win as well, everyone got a lucky numbered bottle top with their stickers in their entry baggy with the chance to claim even more swag. And whilst all the racing was going on there was plenty of other things to do, in fact it was quite possible to completely miss all the roller action without even trying. Morvelo were there with a stand flogging off boxes of their clothing, Puncture Kit frequently, er, punctuated the proceedings on his wonderful bike-and-drumkit contraption thing. There was a live spray can art display by some Brighton street artists to watch and wonder how they don’t go over the lines, you could talk to RPM90 about your next cycling holiday, buy some bike related art from Lois May-Miller, stroke some Kinesis bikes and queue up for a chunk of hog-roast in a roll from Andy Annat the UK champion BBQer, or have a crepe or galette served from Creperie Lui - a cool Citroen H-Van no less and then grab a coffee as soberer-upper in between beers. Because there was a lot of beer. Dark Star had two bars on the go to keep cyclists well lubed and their shop was also open so you could take home a selection of their range of liquids, or a t-shirt, or some riding kit. Mostly people just lounged around on hay-bails, talked drivel about bikes and other less important matters that cyclists like to do in the sunshine with a pint in their hand.

Spin Up In A Brewery from Morvélo Bicycle Apparel on Vimeo.

Racing all done Grizzly and the Grasshoppers serenaded a sinking sun, the brewery had been drunk dry of Hophead, which is over a thousand pints, one whole pig had been eaten and over 500 burgers snarfed. Riders drifted off home via the free bus or wobbled back across Sussex with a slightly more relaxed pedal stroke than the way in. Spin Up In A Brewery bunks the idiom by being a brilliantly organized day, organized in that lovely way that makes you feel not organized, anyone with half a brain should mark down the date for next year’s event, already confirmed as May 24th 2014.