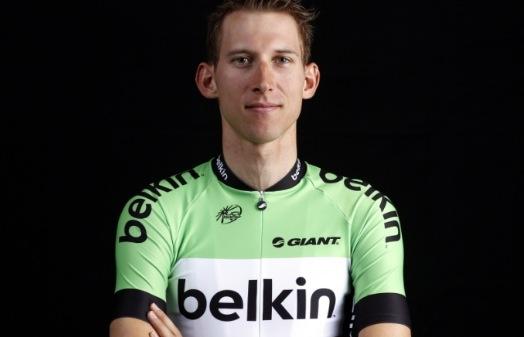 Blanco Pro Cycling has announced a change of name and unveiled its new kit as it prepares to take to the start of the Tour de France on Corsica on Saturday as Belkin Pro Cycling.

The American consumer electronics accessories and peripherals firm was formally unveiled as the team’s new sponsor today, although reports it would be coming aboard first appeared earlier this month.

Belkin’s backing ends uncertainty over the team’s future after long-term sponsor Rabobank withdrew its support last autumn in the wake of the Lance Armstrong scandal.

The financial institution has continued to back the team during 2013, but without its name appearing in the title or on jerseys.

However, the bank’s name has still featured regularly in headlines in the cycling press and beyond, with a number of former riders including Michael Rasmussen coming forward to confess to doping while with the Dutch outfit.

The desire of the team to look ahead, rather than backwards, is reflected in its new slogan, 'Ride The Future,' as highlighted in this video.

Belkin’s products include WiFi routers, USB cables and other accessories for PCs, tablets and mobile phones, among others. Based in California, it also owns the Linksys brand.

Both companies’ logos will feature on the new kit, with the jersey carrying the corporate colours of green, white and black. The sponsorship agreement runs through to the end of 2015.

Belkin founder and CEO Chet Pipkin said: “Cycling relies on innovation to drive success and has a passionate, tech savvy fan base that follows the sport closely, which aligns really well with the Belkin brand.

“Associating our Belkin and Linksys brands with this successful, well-established pro cycling team enables us to introduce ourselves to millions of people around the world and interact with them.”

The team’s general manager, Richard Plugge, commented: “With 19 victories this year and a new title sponsor, 2013 is shaping up to be a dream season for our team.

“As a company, Belkin shares our values and global ambitions, so we are very excited to have them on board as our sponsor. We look forward to two and a half years of shared successes.”

Currently, Dutch riders including Bauke Mollema who has been designated team leader for the Tour de France, dominate the line-up, accounting for 18 of the 29 men on the team roster, many of those coming through the Rabobank under-23 development team.

"I think you can always score a good deal of points in the classification and as I’m shooting for a top ten spot, that may be as good a reason as any. On top of that, I’m relatively quick in the uphill sprint so that should deliver some extra points.”

The likelihood is that the team will move away from that emphasis on Dutch riders, and given the new sponsorship, we’d anticipate American riders to start finding a home with it.

By coincidence, Rabobank itself has a sizeable operation in Belkin’s home state, which made the Tour of California, an event for which the bank was an official partner, a big target – Robert Gesink won the overall there last year.