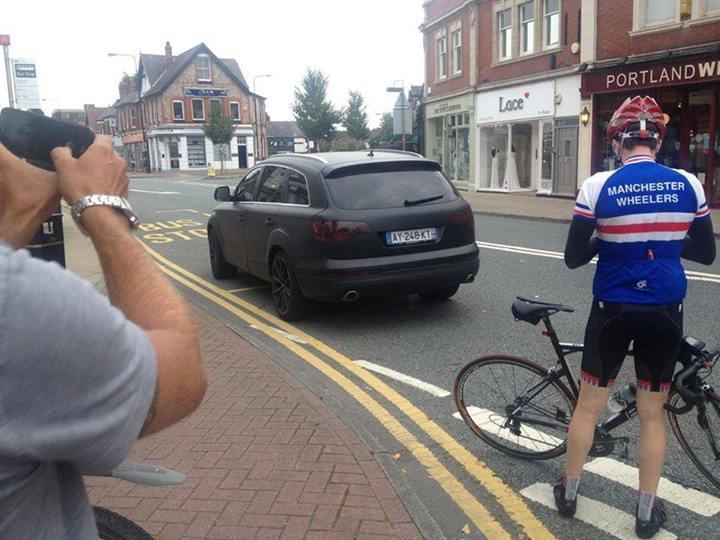 Cyclist in “Good luck finding me” incident tells his story

Rob Lockhart, the cyclist involved in an incident last week involving a car whose driver refused to exchange details after a collision, has been in touch to give a detailed account of what happened.

The story from the the source is a bit different from the tale that was doing the rounds at the end of last week, a good demonstration of how you can't believe everything you read on social media.

“Up to now the information has been extracted solely from various social media feeds,” said Rob, who is concerned that speculation on the incident has distorted the facts. Nevertheless he has expressed gratitude for the response of the online cycling community in trying to track down the driver.

“Social media has been amazing,” said Rob. “The cycling community and others concerned have come together to try and find the driver's identity so that we can provide more information that the police can follow up on.

“I didn't for one moment expect the response I got. It went crazy and spread like wildfire with people retweeting the photos to see if we could find the identity of the driver. I had no idea who the driver could be. Many suggested local footballers but as I don't follow premier league the names didn't mean anything to me.

“The concern and spirit of the cycling community really came together and although no serious injuries were sustained a lot of people have been outraged by the actions of the driver and disregard for British laws. Even Sir Chris Hoy was concerned enough to retweet the photos and so far the tweet has been retweeted around 5000 times.”

Rob was on his way to meet his clubmates at about 17:45 on Thursday September 5 when the incident occurred. Here’s his account:

I was cycling down Victoria Road in Hale on my way to meet up with our evening club ride in Ashley. I was early and had plenty of time to get there.

Victoria Road is a two way residential street but local cars were parked on my side heading towards Ashley Road, although there was enough space for me on my bike to stay on my side of the road.

As I rode towards the mini roundabout before the junction with Ashley Road I could hear a car approaching very quickly from behind. I looked around to see a black car approaching me. Without hesitation and giving me little space the car flew past at about 45 to 50mph on a 30mph restricted road.

I thought to myself, "this driver looks dangerous", and kept my eye on the car as it negotiated the roundabout and approached the T-junction in an erratic manner.

The car had to slow at the junction as a vehicle was driving along the main road. I came around the mini roundabout and coasted towards the T-junction being wary of the vehicle in front.

At the same time, as I was turning, the matte black vehicle had abruptly stopped against the kerb on the exit of the junction on the double yellow lines. I saw it and braked but couldn't stop in time, hitting the back of the vehicle. My face and shoulder took the impact with the back of my professional level race bike going vertical into the air and slamming back down onto the road.

Shocked and stunned I pulled myself together and moved onto the pavement at the side of the vehicle. The driver was black, about 6foot 3/5 inches tall and slim and probably aged in his mid twenties. He got out and immediately said that he didn't see me. I'm not sure how, as I had front and rear flashing lights on at the time and he had just previously overtaken me.

He then walked straight to the cash point to get some money out. This was obviously the reason he stopped but not sure why he thought it was a safe to abruptly stop.

Whilst he did this I was looking over myself for injuries and the bike and his car for any damage as you would in any road traffic incident so that we could then take note and exchange details in the normal way. I am an insured cyclist so this is absolutely no problem to me.

When he came back from the cashpoint he went straight towards his car door to get back in. I asked him if we could exchange details and he said that it wasn't relevant because I'm not in a car and I'm on a bike. I explained that that doesn't matter and we still need to do the formalities. He then got in his car to drive off. I quickly fumbled in my jersey pocket to get my phone out so that I could take a photo of the number plates. As he closed the door he laughed at me and said that I wouldn't be able to trace him because of his foreign registration plates.

I didn't manage to get my camera phone out in time as he drove off. But I soon realised there were two guys that had come out of the pub on the corner who had seen the whole event and captured his car and registration plates with their camera phones. They said to me that they are willing to be witnesses and that they thought he was completely in the wrong for the way he acted.

Soon another guy who was in another pub across the road came over and also offered photos and said that he would be a witness.

Later on that evening I contacted the Police and reported the incident. The next morning I was told that the police could not trace foreign registered cars for a minor incident.

As I have local friends on Facebook and Twitter I posted a photo to see if anyone recognised the distinctive matte black Audi Q7 with French plates so that maybe I could trace it and provide more info to the police or insurance company.

The car was a matt black Audi Q7 with the registration number AY-248-KT, also bearing the Department code 95 (Val d’Oise to the north west of Paris in the Ile-de-France region). The driver has been widely identified on Twitter, though for legal reasons we cannot name him here.

There's been a lot of discussion of this story in the forum. Our man Dave Atkinson has this to say on the subject of Rob's liability if he rode into the back of a stationary car:

A lot of people are saying that if you go into the back of someone it's automatically your fault; it's worth pointing out that that isn't true.

Many of us as cyclists are campaigning for strict liability in collisions: in the absence of any independent testimony to the contrary the liability is held to be with the driver in a driver-cyclist collision, and with the cyclist in a cyclist-pedestrian collision: chain of liability based on potential to do harm. This is liability and not blame, which is important.

The same assumption of liability exists in rear-end collisions as it's the responsibility of the following vehicle to keep enough distance to be able to stop safely. However that doesn't mean the driver who rear ends is 'to blame', although they are liable for the damages. And if there's independent evidence to show fault from the driver in front, then they can be held liable. There's three independent witnesses here.

So while Rob went into the back of a car he hasn't necessarily commited an offence by doing so. The driver may have commited two: parking on a double yellow line and failure to stop.

The law on stopping is that "the driver of the motor vehicle must stop and, if required to do so by any person having reasonable grounds for so requiring, give his name and address, the name and address of the owner of the vehicle and the identification marks of the vehicle. The duty to stop means to stop sufficiently long enough to exchange the particulars above".

I'd say it's fairly clear in this instance that Rob has 'reasonable grounds' for requiring the driver's details. He doesn't have to 'prove' to the driver that he's injured or the bike is damaged.