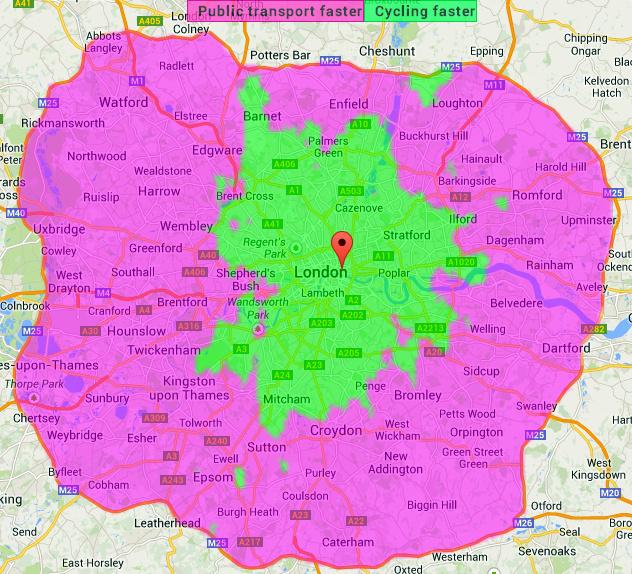 Is it quicker to ride or take public transport in London? That’s the question Peter Thum-Bonanno of FindProperly.co.uk set out to answer after being surprised by the response from cyclists to a function on his website to minimise commute time. Turns out, the answer is 'yes' even more often than you might think.

Find Properly is designed to help people find rental properties in London according to preferences like crime rate, green space and so on. You can also specify how long you’re prepared to spend commuting into work.

But when the founders added cycling as a method of commuting and announced bike riders could now use the site to find a place to live that minimised bike commute time, they were surprised at the reaction.

“I don’t like commuting,” says Peter on Find Properly’s blog, explaining why Find Properly has a commute-minimising function, and how he’d recently extended it to cycling. “When we shared the good news with cyclists on Facebook, we were surprised by the reaction – cyclists seem to love commuting!”

“I enjoy my commute because I cycle,” said another, while one commenter described a tour of London landmarks taking in Tower Bridge, London Bridge, and St Paul's Cathedral on the way to work. He concluded: “I won’t to change my place, I love my route!”

In response Peter decided to find out how far you had to commute for riding a bike to be quicker than using public transport. “It was time to whip out Excel and do some analysis,” he writes. “(I have never sounded so nerdy).”

It turns out that in London almost all journeys of less than 5km (3 miles) are quicker by bike, and public transport only becomes faster for more than 50 percent of journeys if you’re travelling more than 13km (8 miles). The map up top shows the area from which it's quicker to commute into the City by bike.

Peter’s further analysis concludes that a big part of the reason for this is that public transport in London might be very convenient, but its also very slow.

“For short journeys, public transport is slower than walking,” he writes. “This is because of all the time you waste with public transport: walking to and from the nearest stop and waiting for the bus or descending to the tube platform all add significant time. These wasted times are largely avoided by cycling.

“Let’s throw away our public transport system and only use bikes.” Peter concludes. “OK, not really.

“London has, in my opinion, one of the best transport systems in the world. Is there anything more beautiful than seven 38 buses arriving at the stop together?

“And yet, despite this, for many journeys I could out-jog you on public transport – that’s how slow it is!”

You can see for yourself whether you’re better off using public transport or riding a bike to get around in London, with the nifty visualisation Find Properly has created. You just click on a point on the map and it’ll show you the ‘cycling zone’ - the area from where riding a bike is quicker than public transport. 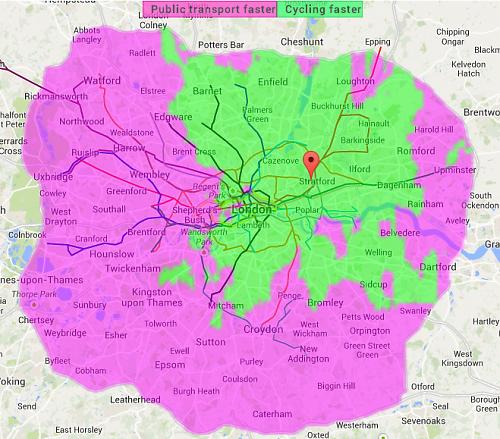 For example, the map above (click to embiggen it a bit) shows the zone where it's quicker to ride than use pubic transport to get to Olympic venue Queen Elizabeth Park.

In case you didn’t get the memo, you’re supposed to use public transport to get to Queen Elizabeth Park. It’s therefore a bit bonkers that it’s quicker to ride a bike there from a vast swathe of London, and when you do get there you’ll find yourself with almost nowhere to lock your bike and security guards telling you to walk your bike along the pavement. Next to the on-road cycle lanes. Oh, and there’s no dedicated bike parking anywhere in the park.

But I digress. If you're wondering why there are blobs of purple surrounded by green, they're usually close to Tube stations. The mash-up uses data from Transport for London for journey times at the daytime peak. It's probably not perfect as it's hard to imagine how it could allow for the time taken to mess around with locks or to ride aimlessly round Westminster trying to find a Sheffield rack, but it's a pretty strong argument for riding bike rather than takinf the Tube.