Greg LeMond is back with three carbon road bikes

Limited edition TdF86, TdF89 and TdF90 road bikes made by Time point to a rejuvenated LeMond
by David Arthur @davearthur

The three limited edition models, TdF86, TdF89 and TdF90, are produced using Time’s NSX front triangle and head tube with a rear triangle designed to Greg’s specifications. Compare the back end of the new LeMond bikes and there’s a clear, if subtle, difference.

On the subject of sharing frame designs with Time, Greg says, “We are not doing this limited-edition production run with Time just to slot into the elite category only for the wealthy. We want to control the manufacturing of our initial top-end bikes in order to bring new, innovative technology into all of our bikes, eventually trickling down to our lower-priced bikes.” 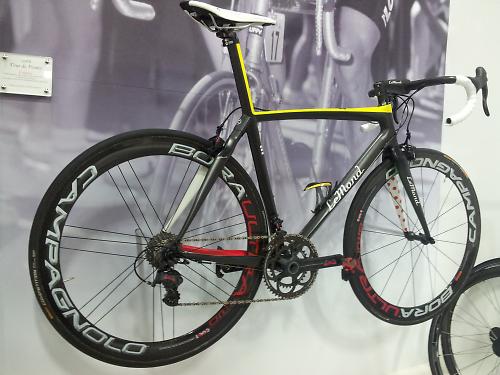 That suggests we can expect a lot more from the LeMond brand in coming years. LeMond has established an in-house team of designers and engineers to develop a range of bikes to be launched early next year, with a targeted availability of August 2014.

More on the new TdF86, TdF89 and TdF90 framesets... Each frame has been painted to reflect the team jerseys for each year Greg LeMond won the Tour. So that’s La Vie Claire, ADR and Z-Tomasso. Head to your favourite search engine to see the jersey designs from those teams.

Working with Time proved to a be an easy decision because LeMond and Time have an association going back years. In 1985 Jean Marc Gueugneaud built a carbon bike for him when he was racing with Bernard Hinault on the La Vie Claire team. The partnership continued: when Gueugneaud left Time he set up TVT, a custom carbon frame company, and provided bikes for LeMond which he rode to his three Tour victories and the World Championships in 1983. TVT was then bought by Time in 1992. You can learn more about Time’s carbon manufacturing in our behind-the-scenes feature. Greg used Campagnolo during his racing career, and this long-standing relationship is reflected in the fact that LeMond will only offer Campagnolo builds. A Chorus build will be $7,499 and top out at $11,999 with a Campagnolo EPS build. They’ll be offering Campagnolo’s 80th anniversary Record bike for US$10,999. Framesets will cost $4,449.

LeMond carbon fibre stems and handlebars, also made by Time, will also be available as optional upgrades, prices at $435 and $379 respectively.

Six frame sizes will be offered, from 49 to 59cm. LeMond measure the frames centre-to-centre. We’ll have more details on geometry soon.

LeMond willl be selling the bikes through select dealers and direct, but we've had no word on when they’ll be coming to the UK. We’ll keep you updated.