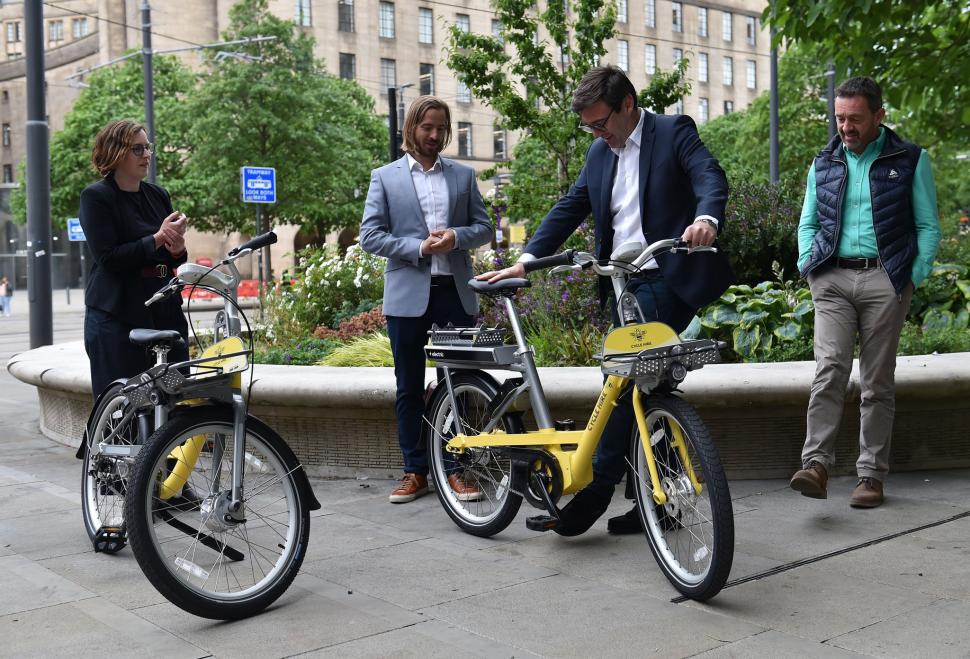 Burnham said he hoped the city's latest fleet of hire bikes would not end up in the canal...
by Dan Alexander

Mayor of Greater Manchester Andy Burnham has asked residents to not chuck the city's £17m rental scheme bikes into the canal. Burnham admitted feeling nervous about the scheme opening later this month and hoped that people would treat them like their own bikes.

The last attempt at a bike hire project in the city, run by Chinese firm Mobike, ended with hundreds of bikes in the city's canals each month, while others were hung from lampposts or stolen.

Burnham told the Guardian: "I would just say to people: these are your bikes, we own them. So, please look after them. Damaging your own stuff doesn’t make sense."

He also emphasised they are Bee Bikes, not 'Burnham Bikes', ahead of the scheme's imminent launch on 18 November.

The bikes are owned by Greater Manchester but will be operated by Beryl for the first five years, the company behind bike hire schemes in several UK cities such as Norwich and Bournemouth.

Burnham has committed to 1,500 bikes, including 300 e-bikes, available to users across Manchester, Salford and Trafford by next summer and, if successful, there are plans to expand the project across Greater Manchester.

Here you go - your new “Bee Bikes” which will be on our streets from November. 👇🏻

Many will be e-bikes and, in time, part of a single integrated payment system across bikes, buses and trams.

"Vandalism is something that you don’t have control over," Boardman said, before explaining the scheme was planned alongside Greater Manchester Police, unlike Mobikes that were "dumped on the street" at short notice.

Earlier this week it was announced that Nextbike UK would be halting its bike hire scheme in Cardiff due to a "staggering" level of theft and vandalism.

300 bikes were stolen – 130 of those since August this year alone – and a further 260 had to be scrapped due to vandalism, including being dumped in rivers or set on fire.

"Our teams simply cannot keep up with the level of damage and theft being carried out," the brand's UK Managing Director Krysia Solheim said.