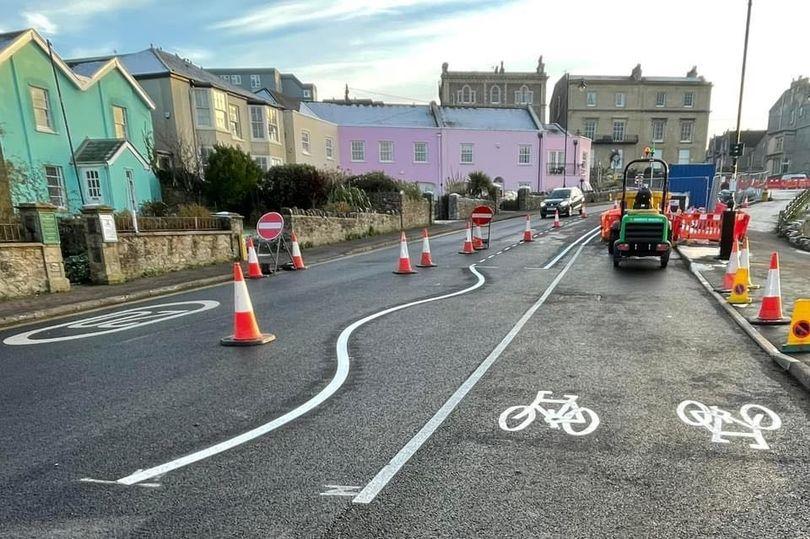 Campaigners opposed to the installation of a segregated cycle lane and one-way system along Clevedon’s seafront formed a conga line at the weekend to protest against the new road layout, which they say has turned the North Somerset town into “Balamory from hell”.

On Sunday afternoon, around 300 activists paraded along the promenade as part of a protest organised by the ‘Save Our Seafront’ campaign, a local residents’ group demanding that North Somerset Council scrap its almost-completed initiative to create space for active travel and reconfigure parking in the town, SomersetLive reports.

The campaign’s latest demonstration was organised to highlight what it regards as the council’s “ridiculous” decision to paint ‘wavy’ lines on the new one-way road, which the local authority says will help reduce driving speeds as well as curbing the “potential abuse of parking” along the seafront.

As well as the new ‘wobbly’ lane, North Somerset Council’s plans to improve Hill Road and The Beach in Clevedon also include the creation of a bidirectional 400-metre-long cycle lane, new cycle parking provision, widening the pavement along the seafront, and building parklets outside cafés.

Additional car parking has also been created at the eastern entrance of Hill Road to replace those spaces removed due to the installation of four new pedestrian crossings as well as loading bays to service local businesses.

The speed limit on the seafront and surrounding roads – where in September 2020 a cyclist sustained critical injuries in a collision involving a motorist – is to be reduced to 20mph, and it will also be made one-way.

According to the council, the scheme “aims to encourage more walking and cycling in the town” as part of its “commitment to promoting healthier lifestyles and tackling the climate emergency”.

However, while a public consultation found that 50 percent of locals supported the plans, compared to 42 percent who opposed the scheme, since the initiative was announced ‘Save Our Seafront’ has led a high-profile campaign against the redevelopment and penned a petition to the council which attracted over 6,000 signatures.

The Conservative MP for North Somerset and former cabinet minister Liam Fox is among the locals opposed to the measures, and in early 2022 tweeted that “huge numbers” joined a protest “on a cold and windy January day against North Somerset Council’s plans to destroy our seafront with a cycle lane that is neither needed, wanted, nor a good use of scarce resources.”

Huge numbers joined the protest on a cold and windy January day against North Somerset Councils plans to destroy our seafront with a cycle lane that is neither needed, wanted, nor a good use of scarce resources. Sign the petition against these plans 👇 pic.twitter.com/CVxLlOoG9I

Last month, we reported that the roadworks required to finish the project have also been blamed for driving away customers from local shops and restaurants, and “killing Christmas trade” – despite most traders in the town declaring their support for the new active travel measures.

And now, Save Our Seafront has turned its attention to the newly painted road layout on the promenade – converted to a one-way street to allow for the installation of the bike lane – which has seen its wavy lines attract the attention of the national press, who have dubbed it a “snake lane” and a “driving lane for drink drivers”.

North Somerset Council says the wavy lines are “a design feature to reduce the potential abuse of parking at these locations and help make the road feel narrower, which is a technique used to slow traffic speeds.”

“A wavy line provides uncertainty to the driver and is proven to help reduce unwanted parking,” a council spokesperson told the Metro last week.

“Causing confusion to drivers is never a good idea”

Nevertheless, the unusual design has prompted the opponents of the scheme to renew their campaign with a fresh wave of protests and petitions claiming the layout will make the seafront more dangerous and harm businesses.

“We are against the changes for many reasons and want the seafront to be put back to how it was. But we are primarily concerned about the safety issues, loss of parking, and the effect on local businesses in the area who are 100 percent against the scheme.

“We received safety information from North Somerset that shows, in the last five years, there have been only two personal injury accidents in the whole scheme area. This is an exceptionally good safety record and suggests the expression when auditing road schemes, ‘if it isn’t broken, don’t try and fix it’.

“Both accidents involved injury to non-motorised road users (one pedestrian and one cyclist), and the changes are likely to increase the potential risk for similar accidents of both natures.”

The activist, however, failed to acknowledge that one of those incidents, as noted above, involved a collision between a cyclist and a motorist, leaving the person on the bike with critical injuries.

Hawkins also told the local newspaper that the group has written to the Secretary of State for Transport, Mark Harper, to ask whether any mechanisms are available to bring the scheme to a halt on safety grounds.

“We protested the changes on Sunday in the hope that North Somerset will at last listen and talk to us about our safety, parking concerns and the detrimental effect on trade for the local businesses,” Hawkins continued.

“We have begged them for over two years to meet and talk to us about this scheme, but they have always refused, and despite the leader of the council, Steve Bridger, saying that he will engage with the community and listen, he has failed to do so, even when we wrote to him personally to request a face to face meeting.

“This lack of engagement and our real concerns that the silly wriggly line making the seafront look like Blobby Land is dangerous for cyclists, motorists, and pedestrians means we have had to take this direct action and have more actions planned.”

Soon after the wavy lines were revealed along the seafront last week, Conservative MP Fox once again criticised the initiative, which he dismissed as “not necessary”.

“A vast amount of public money is being spent to solve a problem which does not actually exist,” the former Secretary of State for International Trade said.

“We do not have major road safety issues on Clevedon seafront at present, despite it being a Victorian amenity. We will, however, have safety issues in the future as a result of the incompetent plans of the current North Somerset Council.

“The project is not popular, not safe, not affordable, not properly consulted upon and not necessary. It damages historic amenity, will disadvantage visitors, especially the elderly, will disrupt local trade and impede access to local residents.”

Sharing a post from Clevedon Conservatives highlighting the new road layout, the party’s Yatton branch also echoed Fox’s claims that the scheme will pose significant risks for locals, including the potential for “car doors opening into [the] cycle lane” and the apparent danger of “mixing high speed lycra clad cyclists with children”.

Responding to Sunday’s protest, North Somerset Council once again defended the layout and wavy lines, which it says are due to be finished with a surface treatment in the spring.

“Safety is a priority and a road safety audit was completed when the scheme was designed. There will also be a further one undertaken when it’s completed,” the spokesperson said.