British cyclist Dan Bigham has broken the UCI Hour Record in Grenchen, Switzerland this afternoon, passing the existing record of 55.089 kilometres set by Belgium’s Victor Campenaerts at altitude in Aguascalientes in Mexico in 2019 with around half a minute to spare and setting a new benchmark of 55.548km.

Campenaerts was among thousands of viewers cheering on his attempt while watching a livestream hosted on the YouTube channel of Ineos Grenadiers, where Bigham works as performance engineer.

Bigham’s successful record attempt took place on the same track where he last year set a new British record of 54.723km – surpassing the 54.526km set by Sir Bradley Wiggins at Lee Valley in 2016 when he took the UCI Hour record from Alex Dowsett.

Speaking shortly after completing his record-breaking ride, Bigham said he thought it was “my best paced hour by far.

“I was a bit ahead of split for the first half, but actually felt really good,” he said.

After the midway point, he focused on trying to maintain a lap time of the 250-metre track of 16.0 seconds, which he said was “quite daunting, because I’ve not ridden 16.0s for half an hour before.

> Dan Bigham on the road.cc Podcast

Asked how it compared to his British record-breaking ride, he said: “I’ve had an ungodly amount of support from Ineos, I think that's what's been like the step change and not just on the equipment.

“They just absolutely stepped it up and the support I've had around me is second to none. It just made life a whole lot easier just to come in here and perform.

“Even this week not having to worry about my bike, mechanics, the timing, the livestream. Nothing. I’ve not even cooked dinner. I don't even have to put my stuff in the dishwasher.

“It's been absolutely everything you'd expect from this level of team, it’s been second to none.

Asked at what point he believed he’d got the record, Bigham said: “Well, I guess you never got it until you've actually ridden the laps. It’s a kind of scary thing, you're on pace, but you’ve still got to cover the distance.

“Actually I had a bit of a wobbly in the head, just after halfway, like, how am I going to ride 16.0 [second laps] for half an hour? That's nuts. You know, power demands, wattage. But it never bit, I was like, ‘This is really easy, it’s in control, just keep doing it’.

Bigham held an amazingly consistent line throughout the ride, apart from the last five minutes which he explained was to avoid taking risks that could result in a crash and leave no time to recover.

“You play it and don’t ride the line you probably should do, just thinking maybe ride 10 centimetres up and not put yourself in a risky situation is probably a wise thing to do.

“But it’s actually really, really enjoyable and quite nice when you know you've got that safety net so you can press on into it and see what the legs say and see how far you can really push the record on. 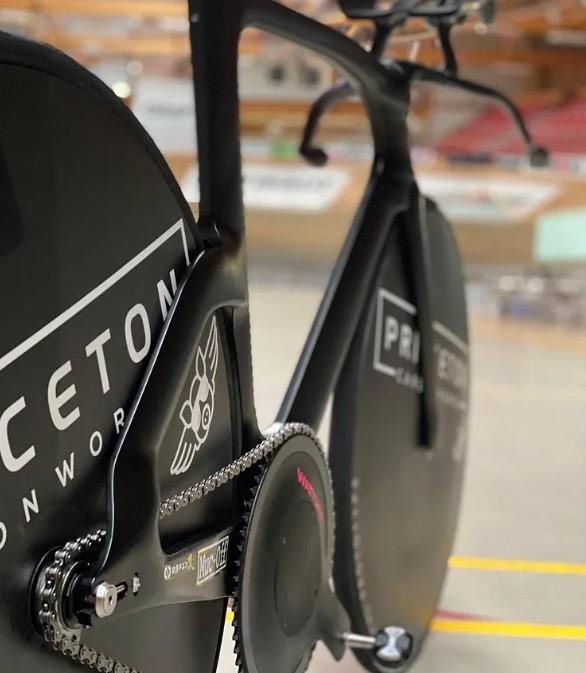 It was confirmed by Ineos Grenadiers shortly before the attempt that Bigham would use a prototype Pinarello frame, with the rider himself posting the above picture of the bike on his social media earlier today. Presumably it's taken plenty of inspiration from the new Bolide F time trial bike launched earlier this year.

Bigham's association with Ineos meant he was able to take advantage of the team's sponsors such as Princeton and Bioracer, so his equipment was quite different compared to last year when Bigham broke the British Hour Record previously held by Bradley Wiggins. Here is a full spec list of his equipment used in today's successful attempt: