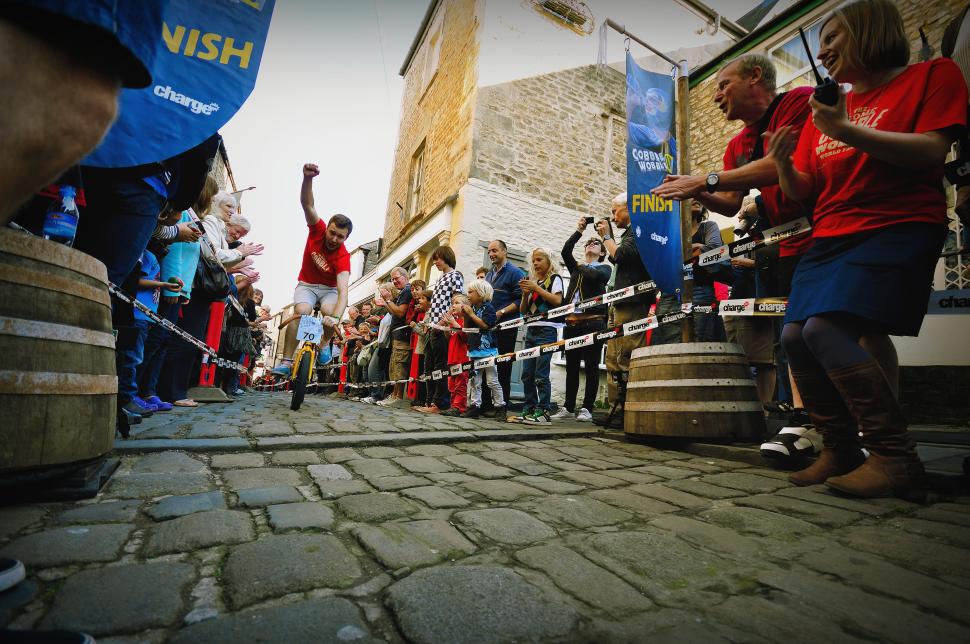 It may have only lasted for four years in its original guise, but the Cobble Wobble – a madcap 179-yard hill climb through the (you guessed it) cobbled centre of Frome – became something of an institution for cyclists in the UK and beyond.

Set against the picturesque backdrop of seventeenth-century buildings and lined with cheering crowds, it was an eclectic blend of professional bikers, have-a-go tryers, plucky kids, and fancy dress lunatics all trying – and often failing, with spectacular results – to be fastest up a steep, cobbled hill through the centre of a Somerset town.

By the time of its until now final outing just over a decade ago, it was attracting some of the world’s best cyclists. That 2012 edition saw three-time world mountain bike four-cross champion Michal Prokop come out on top, ahead of fellow 4X and BMX pro (and 2011 winner) Lewis Lacey and multiple mountain bike trials world champion Martyn Ashton. Rapha Condor pro Dan Craven was also among those giving it the beans back in 2011.

Alongside the cream of the bike handling crop – a practical necessity on those treacherous winter cobbles – hundreds of participants tried their hand at hill climbing, with some even opting to tackle the cobbled berg in fancy dress, or on a unicycle, or (in tribute to the event’s festive slot) with an entire Christmas tree strapped to their back.

Even road.cc’s Dave gave it a go too, twelve years ago, when he described the Cobble Wobble – after getting his breath back – as a “brilliant advert for the inclusiveness of cycling”. 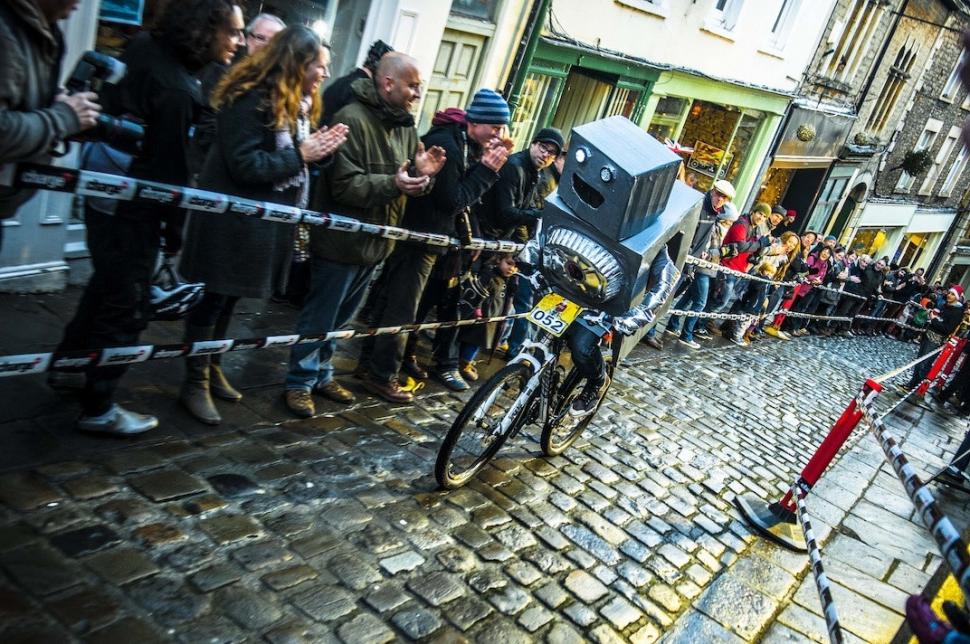 R2-Di2 struggles up the greasy cobbles in 2012 [credit: Tom Rickhuss]

That inclusivity, inherent wackiness, and general feel-good atmosphere saw the Cobble Wobble quickly became a British staple since its inaugural race in 2009, even inspiring imitators such as the Cobble Hoppel in Germany and the Red Bull Hill Chasers event.

The 2012 race, however, proved to be the final edition of the event’s original four-year run, as organiser and founder Andrew Denham turned his attention to The Bicycle Academy, a frame building school that went into liquidation in December after training over 1,000 people from across the world how to build bikes.

“Over the ten years that TBA was in business I had so many commitments that the event never quite happened,” Denham tells road.cc of the Cobble Wobble’s decade-long hiatus.

“The first event was run with a bit of tape, some radios, and a stopwatch, it was charming. But the following three events were so much bigger and fantastical that the lo-fi approach just wouldn’t work, as it was just far too popular.

“Putting on such a thing in the centre of a town isn’t easy, and as far as I’m concerned there just wasn’t any point in considering it unless it could be done properly.” 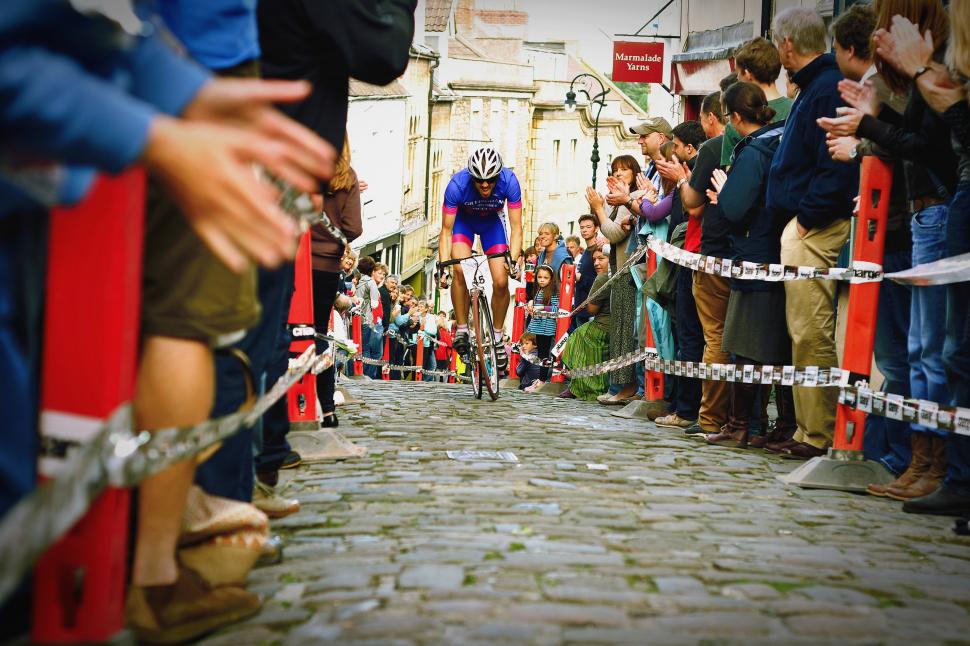 The crowds are out in force for the 2010 Cobble Wobble [credit: Tom Rickhuss]

But with The Bicycle Academy’s unfortunate demise just before Christmas, some space finally opened up in Andrew’s diary for the first time since 2012, prompting him to resurrect an old Frome favourite.

“Unfortunately TBA closed its doors in 2022, and while that’s hugely sad, it does mean I’m finally able to create the time to organise The Cobble Wobble, for 2023,” he says.

“So here we are, now in our 40s, organising a great big silly bicycle party on a cobbled hill. All ages are welcome, fancy dress is encouraged (but not mandatory), and the best bit…. Everyone’s invited. We can’t wait!” Those wings could come in handy... [credit: Tom Rickhuss]

So, start working on your hill repeats and get the sowing machine out of the cupboard, as the event’s fifth edition, and the first in almost eleven years, will take place later this year, Denham confirmed on Monday.

It will be held after the Glasgow world championships in August, in order to, Andrew says – in true Cobble Wobble style – “give our elite riders a chance to warm up”.

“You might laugh but the 2010 King of the Cobbles Chris Akrigg was a six-time national champion, and the 2012 winner Michal Prokop was a reigning World Champion!” he says. 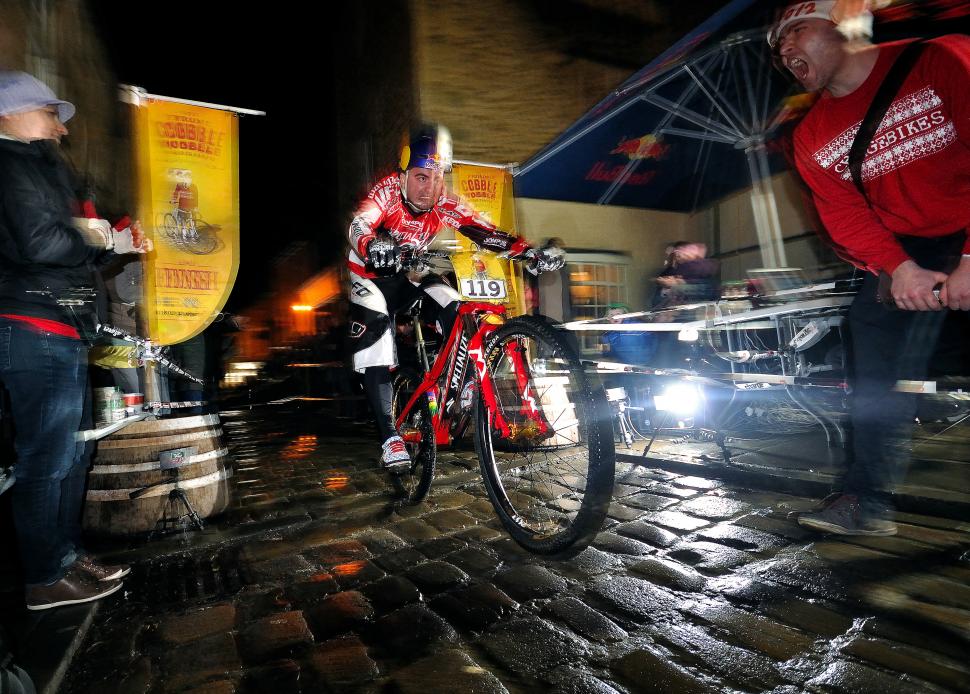 Prokop starts his decade-long stint as the King of the Cobbles [credit: Tom Rickhuss]

Denham has also introduced some changes for the event’s much-anticipated return. First, thanks to the high demand for the race in its heyday (some categories sold out within an hour of the registration opening in 2012), entry capacity will be significantly increased.

Both a king and a queen of the cobbles will be crowned in 2023, while an e-bike category will also be included for the first time.

Andrew says that 210 UCI points will be up for grabs for the winner, “on par with a Tour de France stage”. We assume he’s joking…

Promising that some of the cobbles will be wobblier than they were ten years ago, Andrew hopes the unique character and inclusivity of the Cobble Wobble, attributes that helped make it such a success at the turn of the 2010s, will continue in 2023 and beyond.

“The Cobble Wobble is so much more than a race,” he says. “It’s a big silly party that just happens to be stretched out over 179 yards of cobbled hill. With bikes. And fancy dress. And the odd world champion athlete thrown into the mix.

Now, I better get to work on my costume…